Hundreds of Chelsea residents stood in a line that curled all the way around the block, each waiting to receive a box of food from a pop-up pantry last week.

In a city that has the highest concentration of COVID-19 cases in the state, Council President Roy Avellaneda said the need for food was greater than what could be offered at any of the already open pantries.

With the staggering pace of layoffs and furloughs brought on by the coronavirus pandemic, other Massachusetts hunger relief agencies have seen a similar surge in food insecurity, and a rapidly growing demand for their services.

Pre-COVID-19, one in 11 Massachusetts households faced hunger, which amounted to 9% of residents. As of March, according to Project Bread President Erin McAleer, data shows that 38% of people in the state are now food insecure.

“The food pantry system is not meant to feed everybody. It certainly doesn’t have the capacity to feed 38% of Massachusetts residents,” McAleer said. “It’s really meant to fill critical gaps and provide temporary support.”

In Chelsea, Avellaneda — who owns Pan Y Café, a local coffee shop that’s been shut down for three weeks — offered up the space and helped coordinate the pop-up pantry with the Chelsea Collaborative.

Both times the pantry opened, he said, they quickly ran out of supplies.

“The outpouring was unbelievable,” he said. “People just came out from all over to pick up, so we ran out of food.”

But there were so many people that toward the end, he said, they began running out of certain items.

“If we’re given 300 bags of bread, well, the first 300 boxes are going to have the bread, but not the last 400,” Avellaneda said. “But, you know, again, people are just happy to get whatever and we try to do as much as we can.”

Last week, the National Guard also began distributing food to communities that have been the hardest hit by COVID-19, including Chelsea.

MEMA and the National Guard brought hundreds of boxes of food to Chelsea on April 16, 2020.

If need continues, Avellaneda said he’ll likely step in again with the help of local organizations to fill the gaps.

“I’m not sure what the impact is gonna be, and how the turnout is gonna be,” he said of the Guard’s efforts. “And so I guess we’ll respond to what they do and how well it works out.”

In Revere, officials held a similar pop-up pantry on Thursday, April 16, and efforts like these have emerged across the state.

Join the City of Revere, @RevereOnTheMove and the Revere Farmers Market for a Pop-Up Food Pantry – one time only. Open rain or shine to residents only this Thursday, April 16, 2020 from 11AM-1PM at the Central Ave Parking Lot (40 Central Ave). pic.twitter.com/qfKs9b7f3Q

Boston Public Schools officials are serving lunch and breakfast on weekdays from 8:30 to 11:30 a.m. at locations across the city. But as many live beyond Boston, and have grown worried about picking up meals where they may be exposed to the virus, union bus drivers have started delivering food directly to households.

Our team was out spreading positivity, joy and nutrition yesterday. We began delivering breakfast and lunch meals to students with special needs who regularly receive door to door transportation. We served over 900 meals and are planning to expand next week! #allhandsondeck #BPSProud 🧃🥪🍊

Catherine Drennan, a spokeswoman for the Greater Boston Food Bank, said the organization has put all its focus into making sure its food distribution sites are operating at full tilt.

“Food insecurity was a problem, even before COVID-19,” Drennan said. “And this crisis has just exacerbated the problem into something that’s just something like we’ve never seen before.”

In March alone, the food bank distributed 8 million pounds of food to a network of nearly 600 partner agencies throughout New England.

“That is the highest amount of food we’ve ever distributed in our 40-year history,” Drennan said.

For context, the most they’ve ever distributed in past years was 5 million pounds of food during other crises, she said.

Need food? Search for a program or pantry by entering your zip code: https://t.co/zb3hpV2t4t #FoodAssistance https://t.co/3XP2UWMQKo

“There’s never been anything like this in our 50-year history as an organization,” she said.

Drennan noted another spike, saying there’s been a 50 percent increase in the demand for food since this time last year.

“This is the greatest need we’ve ever seen,” she said.

Many food pantries have met the current demand, but with volunteer shortages and the lines of people growing longer every day, Drennan said they’re left in “a real fragile state.”

Demand of food continues to rise. First Congregational Church of Revere typically sees 60 people each week, but 300+ showed up this past week. For some, the first time asking for help: https://t.co/Hfo1PTJ5ym

“Unfortunately this is going to cost us a lot to get us through the next six to nine months,” she said. “We’re looking at probably $20 million, and that number is a moving target every day.”

Drennan said even as they develop contingency plans and follow new protocols to get food out the door, “the emergency food system is not designed to shoulder the burden of a crisis like this” on its own.

“In some ways the resiliency of the network is so powerful that we have been able to meet the need,” she said. “But whether that is sustainable is the big question.”

The federal initiative, commonly known as food stamps and run by the U.S. Department of Agriculture, is much better suited to respond to the crisis, she said.

But many people don’t apply because they don’t think they’re eligible.

McAleer said when people are hungry, they instinctively go to local food pantries instead, noting that relief organizations need to get as many people as possible out of pantry lines and signed up for SNAP.

For every 1 meal provided by food pantries, SNAP can provide 12. We absolutely need food pantries to fill critical gaps, but they cannot feed everyone. The scale of the hunger crisis (even pre-COVID 19!) is too big. Federal nutrition programs need to be primary solution.

“The scale of this crisis cannot be met by charity alone,” McAleer said.

Project Bread, an organization providing access to food for people across the commonwealth, offers a confidential FoodSource Hotline in 160 languages that refers people to other community resources. Food counselors will also screen callers for SNAP eligibility, oftentimes helping them complete 90% of their application.

McAleer said in just the last few weeks, their hotline has heard from four times the amount of regular callers.

This chart shows a 3-4x increase in SNAP applications which mirrors the quadruple increase @projectbread is seeing in calls to the FoodSource Hotline. It’s critical we connect people to these programs that provide both immediate relief as well as ongoing support in weeks 2 come https://t.co/VvMHb3Nhex

“This is a whole new group as well, folks that never had to call Project Bread before,” McAleer said. “When people call us and they’re in crisis, and we’re able to connect them with SNAP, there’s a huge sense of relief.”

McAleer noted that anyone hoping to help could consider volunteering, donating, or sharing their stories about using SNAP to help de-stigmatize the federal program.

While pantries across the state are putting forward dedicated work, McAleer said emergency food systems aren’t equipped to continue on the same path as hunger increases.

“I think it’s going to go up. I mean I hate to say that, I hope I’m wrong,” she said, but as layoffs mount, “I think there’s gonna be a lot more folks that are really struggling to put food on the table.” 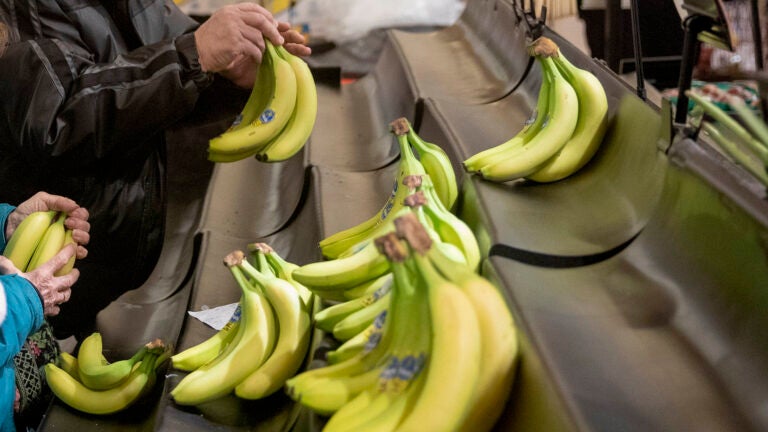 What to know about food availability in Mass. during the coronavirus outbreak