A leader of the White House’s coronavirus response efforts says they’re “very much focused on” Massachusetts, as the state weathers its ongoing surge in COVID-19 cases.

During an appearance Sunday on CBS’s “Face the Nation,” Dr. Deborah Birx — the response coordinator for the federal government’s Coronavirus Task Force — was asked what area President Donald Trump’s administration was concerned about “next,” as the crisis in New York appears to be easing.

“We watch every single metro county in a very granular, granular way because you have to look at it that way,” Birx said.

“We’re a series of small epidemics across the United States,” she continued. “We’re still very much focused on Boston and across Massachusetts, where the epidemic’s continued to spread.”

The longtime government disease expert added that the administration was also “very closely” monitoring Chicago, as well as a recent outbreak in Ohio. Her comments came as number of reported COVID-19 cases in Massachusetts surpassed 38,000, the third most of any state in the country behind New York and New Jersey. The state also has the fourth-most deaths in the country due to the virus: 1,706.

Birx described the national outbreak as a “series of small epidemics” and “independent curves,” noting hotspots like New York had a more “explosive” increase in coronavirus cases compared to Seattle, where the spread was “very low.”

However, according to a White House chart shown over the weekend, the Boston metro area — encompassing eastern Massachusetts and southeast New Hampshire — had the third-most cumulative cases of any metro area in the country, well behind New York and nearly even with Chicago.

“Areas that we continue to watch carefully on the task force include the Chicago metro area, Boston metro, and the Philadelphia metropolitan area,” Pence said, adding that residents should “heed your state and local authorities” when it comes to continued social distancing orders.

Gov. Charlie Baker, who also appeared Sunday on “Face the Nation,” said that governors like himself “appreciate the fact that the feds have acknowledged that the surge is in different places and different states at different times” with respect to their national strategy.

“We’re in a very different place here in Massachusetts than other states are,” Baker said. “We’re right in the middle of the surge now.” 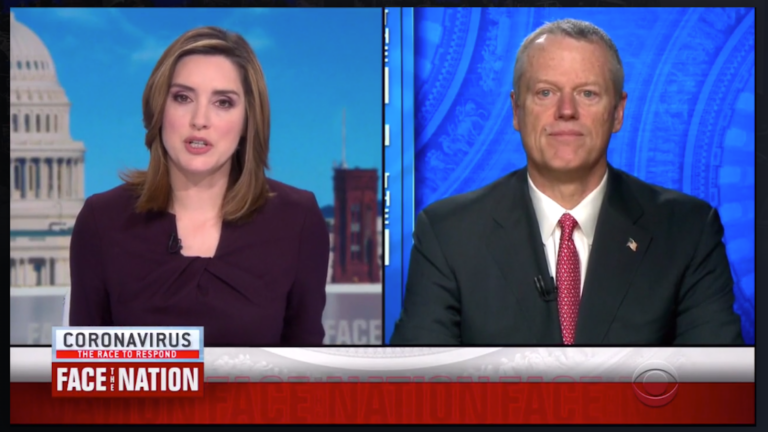