The coronavirus kept a tight grip Monday on hard-hit Massachusetts, which added 1,000 new deaths in just five days as the pandemic peaks in the state.

Massachusetts surpassed 3,000 reported deaths, and there are indications the true death toll from the disease could be much higher. Officials are hopeful things could be turning a corner, but devastation remains apparent as newspapers print page after page of death notices.

The state is “still in the surge and very much in the fight against COVID-19,” Republican Gov. Charlie Baker told reporters Monday. “We will keep the fight up all the way to the end, knowing that when we come out the other side there will be better times and brighter days.”

Massachusetts health officials reported 104 new COVID-19 deaths Monday, bringing the number of deaths in the state since the pandemic began to 3,003. The state also reported 1,524 new cases, for a total of more than 56,400 cases.

An analysis from The Boston Globe suggests that the deaths are probably undercounted, since total deaths in the state rose by 11% last month compared with the average for March over the past 20 years even as the state saw a steep decline in fatal accidents and suicides.

In a picture of the toll the virus has taken on the state, the Globe on Sunday ran 21 pages of paid death notices. On the same Sunday last year, the Globe ran just seven pages of death notices, the newspaper said.

Nearly 1,700 of the deaths in Massachusetts have been residents of long-term care facilities, such as nursing homes, and more than 98% of all the people who died had other health problems, health officials say. The average age of people who have died is 82.

For most people, the coronavirus causes mild or moderate symptoms, such as fever and cough, that clear up in two to three weeks. For some, especially older adults and the infirm, it can cause more severe illness, including pneumonia.

There have been more than 55,000 deaths across the U.S., according to Johns Hopkins University. The number of infections is thought to be far higher because many people have not been tested, and studies suggest people can be infected without feeling sick.

Massachusetts has the third highest number of confirmed COVID-19 cases among U.S. states, behind New York and New Jersey.

There are signs that the worst days for Massachusetts may be behind it.

Hospitalizations have leveled off, and more than 50% of the state’s hospital beds remain available for patients. But officials warn it could take some time before numbers across the board improve dramatically.

“We flattened the curve,” Baker said. “It seems to have plateaued, depending on which part of Massachusetts you are in. The hope and expectation is it will start to fall, but it will probably fall slowly.”

And improving numbers bring little solace to Cambridge resident Rich Stevens, whose uncle died of COVID-19 over the weekend.

“I doubt my aunt and cousins see anything encouraging in these numbers,” he said. “I know I don’t.” 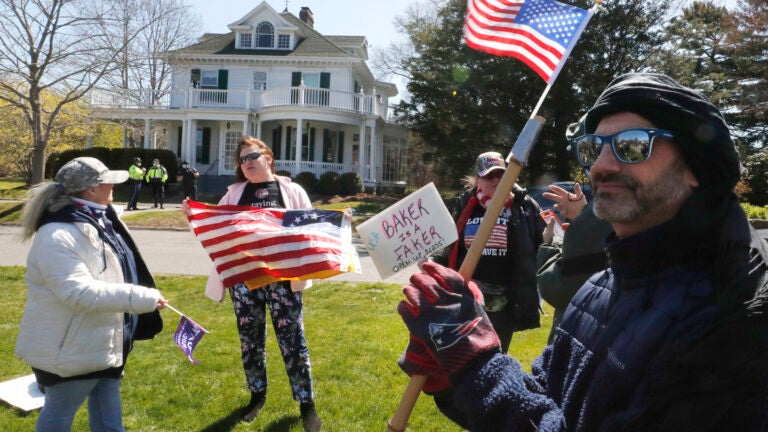