A federal judge is set to hear arguments next week in a lawsuit designed to force the state to better protect prison inmates from the coronavirus.

The ACLU of Connecticut is asking the court to order emergency actions that could include releasing more inmates to protect them from the pandemic. The state Department of Correction says it has taken steps to limit exposure to the virus, including placing prisoners who have tested positive in isolation at the maximum-security Northern Correctional Institution.

Fifty-four more deaths associated with COVID-19 were reported through Friday evening, bringing the state’s total to 3,339.

Connecticut now has more than 36,000 confirmed cases of COVID-19, after more than 600 new cases were reported.

An anti-shutdown rally in Maine featured a prominent GOP face, or at least his voice.

Former Republican Gov. Paul LePage, who recently returned to Maine from Florida, addressed a crowd of several hundred people in Augusta on Saturday from inside a Lexus SC430 parked about 30 feet away. LePage remained in the car because he is self-quarantined, and his remarks were broadcast via cell phone.

People holding signs blaming Democratic Gov. Janet Mills for ruining the economy and taking away their freedoms lined the road between the Blaine House and the Statehouse, while a motorcade of honking cars and trucks adorned with American flags and Trump campaign signs passed by.

LePage told a conservative radio show host late last month that Mills “ought to resign” over her plan for reopening the state’s economy. He also used his strongest language yet in suggesting a reelection bid, saying he’ll “challenge Janet Mills or the Democratic Party in 2022.”

Another 45 people tested positive for the new coronavirus and one more person died, the Maine Center for Disease Control reported Saturday. The total number of deaths increased to 70, and total cases increased to 1,648, officials said.

Meanwhile, Maine’s Democratic representatives in Congress were split on the $3 trillion coronavirus response bill their pushed through the House.

U.S. Rep. Jaren Golden said he supports many of the bill’s provisions but voted against it because it expanded in scope beyond the nation’s core, urgent needs and included a series of unrelated provisions. U.S. Rep. Chellie Pingree voted for the bill, saying it addresses many complex elements of the public health and economic crisis.

More than 100 protesters gathered near the Swampscott home of Gov. Charlie Baker on Saturday demanding the immediate reopening of all businesses and churches.

Some of the participants carried flags and worse Minuteman-style hats. “Open Business. Close Baker,” read one sign. Another said, “Charlie Baker is the least essential worker in the state.” Neighbors who support the Republican governor countered with a sign that read: “We love you, Governor Baker.”

As of Saturday, 84,933 people had tested positive for the virus in Massachusetts, an increase of 1,512 from the previous day. An additional 113 deaths were announced, bringing the total to 5,705.

Three pastors spoke to a crowd of about 300 people Saturday outside the Statehouse, standing a few feet away from signs spelling out the prohibition on gatherings of 10 people or more.

The event featured prayers, songs and speeches from organizers of the ReOpenNH movement, which has criticized Republican Gov. Chris Sununu for issuing orders they believe infringe on their religious rights. Former state Rep. J.R. Hoell said he reminded the crowd that lawmakers also are to blame.

“They’re equally complicit in these rules because they haven’t undone them,” he said in a phone interview. “They were equally negligent in closing the state and they need to reopen it now.”

“We’re not telling people they can’t practice their religion,” he said Wednesday. “But they have to stay within guidelines of public health.”

As of Saturday, 2,217 people in New Hampshire had tested positive for the virus, an increase of 98 from the previous day. Twelve additional deaths were reported, bringing the total to 171.

Girl Scouts won’t be attending traditional camps in Rhode Island this summer, but officials are planning programs to give girls a taste of camp life from home.

The Girl Scouts of Southeastern New England says it could not deliver a safe day and overnight camp experience because of the pandemic and instead will provide weeklong “Beyond Camp” sessions. Officials said they also plan to offer in-person “Family Day” experiences in July or August.

The state health department announced 215 additional people had tested positive for the virus, bringing the total to 12,434. Ten new deaths brought the total to 489.

Officials say test results from the Chittenden Regional Correctional Facility show that efforts to prevent the spread of the coronavirus are working.

A positive test from a staff member Monday triggered mass testing of the entire facility. Results released Friday showed no additional cases of COVID-19 among the 42 staff and 76 inmates who were tested.

Mass testing also has been conducted on all staff and inmates at the Northwest Regional Correctional Facility, and officials will begin the process at the Northeast Correctional Complex next week. Statewide, six correctional staffers and 48 inmates have tested positive.

The Vermont Health Department reported one more case of the coronavirus on Saturday for a total of 934 cases. The state has not reported a death from COVID-19, the disease caused by the coronavirus, in more than a week. A total of 53 people have died. 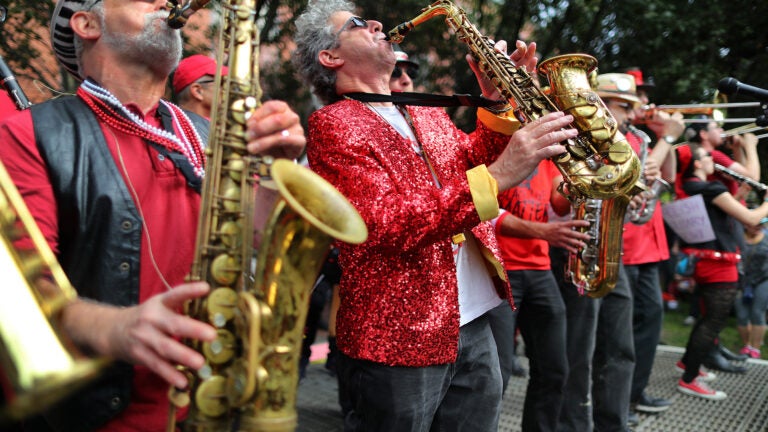 ‘It breaks my heart’: Somerville cancels events through the rest of the year, including HONK! and FluffFest