Out they come on warm, wet spring nights, from beneath leaves and under logs and inside burrows where they have hibernated since fall: a veritable army of amphibians embarking on one of nature’s great migrations, albeit largely hidden from human sight and all too often ending beneath automobile tires.

It is an ignominious fate for creatures with life histories that read like fairy tales. And although nobody knows exactly how many frogs and salamanders are killed while crossing roads, scientists say that even moderate traffic at the wrong time can wipe out entire populations in a few years.

This year, however, amphibian migrations in the northeastern United States coincide with the COVID-19 pandemic. Social distancing and shelter-in-place orders have caused vehicular traffic to decline, turning this spring into an unintended, large-scale experiment.

“It’s really exciting to see what might come of this year,” said Greg LeClair, a graduate herpetology student at the University of Maine. He is the founder of Big Night Maine, a statewide network of citizen scientists who help amphibians cross roads and count them in the process. “It’s not too often that we get this opportunity to explore the true impacts that human activity can have on road-crossing amphibians,” LeClair said.

On a night in early May, LeClair and his girlfriend, Samantha Grimaldi, patrolled a stretch of wooded road in the central Maine town of Unity. (They took turns carrying their 10-month-old daughter, Audrey, who was clad in a dinosaur-print face mask and a “Future Herpetologist” onesie.) On each side of the road was a vernal pool. Unknowing eyes might dismiss these ephemeral springtime ponds as large puddles, but they are founts of woodland life.

The air resonated with the trilling of spring peepers seeking mates; a pool may contain thousands. Two of these fingertip-size frogs were the first amphibians spotted on the road. Frozen solid on a forest floor just months earlier, they were now headed to a bacchanal. LeClair and Grimaldi set them by the pool.

Farther along on his journey was a wood frog, evidently returning home after mating. His mottled brown skin helped him hide on the forest floor but offered little camouflage on the tarmac. The round trip could easily span a quarter-mile — not much to a human pedestrian, but an epic journey for a ground-level, 3-inch-long frog.

Eggs of a spotted salamander in a culvert area.

“Large animals who migrate a lot and are highly visible doing so tend to get some attention,” Robert Baldwin, a conservation biologist at Clemson University, said in an email. “But when you consider what a wood frog has to negotiate, it’s kind of mind-boggling. Nighttime and rain, giant logs to get around, sticks and leaves, snakes.”

When the distance of the frogs’ migration is calculated as a function of weight, as Baldwin has done, it is comparable to the trek undertaken by caribou between Arctic tundra and boreal forest. The frogs make documentary-darling wildebeest migrations look like weekend hikes.

Many pool-breeding amphibians cover equally dramatic distances, Baldwin said. The next road-crosser that night was a juvenile eastern newt, the length of a finger and luminously orange under headlamps. After losing their larval gills, the newts crawl to upland forests a half-mile or more away, returning years later as adults to aquatic life. The outbound sojourn alone can take a year.

One study of salamanders in Massachusetts found that cars killed 17% of those migrating just 100 meters and 37% of those traveling 500 meters. To LeClair, each death is tragic, but his mind also turns to population consequences and lost ecological interactions.

This eastern newt, like many salamanders, will live on a forest floor, consuming minuscule leaf-eating invertebrates — a tiny niche, yet vast when considering that, in many forests, the total biomass of salamanders may eclipse that of birds and small mammals combined.

With the populations of detritivores regulated by salamanders, soils can be nourished by slowly decomposing leaves, making forests more resilient and slowing the release of carbon into the atmosphere.

Salamanders are also eaten by many other creatures, thus becoming conduits of energy and nutrients between pools and the surrounding forests.

“I like to think of the annual vernal pool cycle as a breathing cycle,” LeClair said. “It inhales water in the spring and exhales salamanders in the summer.”

LeClair found a pulverized wood frog identifiable only by its foot, and then, beside the road, an animal he had been looking for all night: a spotted salamander, about 6 inches long, purple-black with bright yellow spots, the charismatic megafauna of northeastern amphibians.

Apart from being beautiful, spotted salamanders are the world’s only photosynthetic vertebrate. Algae living inside the cells of larvae supply the animals with oxygen, a symbiosis that ends as the salamanders mature. Within two years they attain adult size, LeClair said, so this one was anywhere from 2 to 30 years old, potentially born years before him.

The salamander’s cheeks pumped as he rested in LeClair’s hand. This was another ancient trait, a form of breathing ancestrally derived from fish and suggesting an evolutionary lineage that traced directly to the earliest terrestrial vertebrates.

“Roads have been around for something like 0.000003% of the existence of salamanders, and here they are knocking out populations throughout New England,” LeClair said. “They’ve been through meteor impacts and changes in oxygen levels and dinosaurs and ice ages. It would be a shame to have roads be the end.”

Sean Sterrett, a wildlife ecologist at Monmouth University who studies salamander migrations, agreed with LeClair that pandemic-triggered traffic declines should be good for road-crossing amphibians.

But “measuring impacts will be challenging,” he said. Without long-term data against which to compare this year’s numbers, the effects of traffic could be confounded by weather or other environmental variables.

For now LeClair uses a rule-of-thumb metric: the ratio of live to road-killed animals. This spring his 87 citizen scientists rescued 1,487 amphibians across Maine and found another 335 dead. That is roughly four living amphibians for every one run over, double last year’s 2-to-1 ratio. More amphibians certainly seem to be crossing safely.

It is a very preliminary assessment, LeClair conceded, but it makes him optimistic. If the data holds up, he said, it could inform discussions about temporarily closing roads or installing amphibian crossings. That happens in a few places but is uncommon.

It may also be a lesson of what is possible when humans slow down, like the goats cavorting in Welsh streets or dolphins swimming close to Istanbul’s newly quiet shores.

“All right, buddy,” LeClair said as he gently laid the spotted salamander in a bed of reeds. “Good luck.” 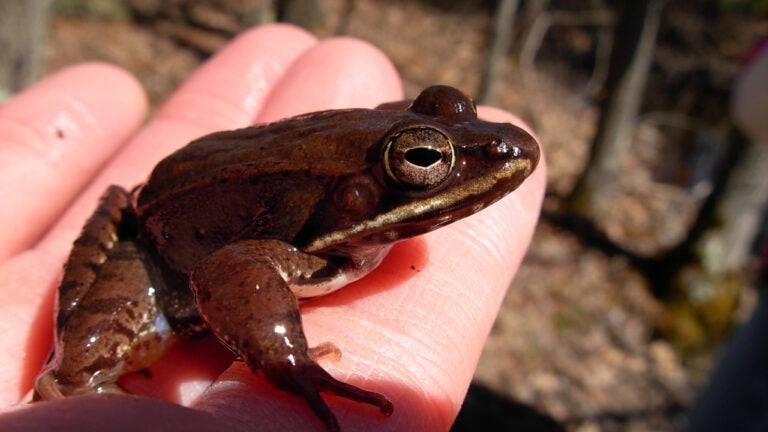