Boston police say 10 people were arrested and four police officers were injured Friday night during protests in Boston against the death of George Floyd, a handcuffed black man who died in the custody of Minneapolis police.

The four officers were transported to local hospitals for treatment of injuries that were not life-threatening, Boston police spokesman Stephen McNulty told Boston.com Saturday morning. In addition to the 10 arrests, one person was issued a summons. The arrests were made over the course of Friday evening related to protests near department stations in the South End and Nubian Square, he said.

According to WCVB, the protests Friday night were largely peaceful demonstrations, which drew hundreds of participants to Peters Park in the South End. Hours later, a group of protesters gathered outside the District D-4 headquarters on Harrison Avenue in the South End, where video captured clashes between the demonstrators and officers.

Confrontation with police outside District 4 turns ugly as protesters clash with officers and it appears they use pepper spray #WCVB pic.twitter.com/qMBpE9MLav

Confrontation with police outside District 4 turns ugly as protesters clash with officers and it appears they use pepper spray #WCVB pic.twitter.com/qMBpE9MLav

Several protesters outside District 4 hit with what appears to be pepper spray in clashes with officers #WCVB pic.twitter.com/zz9ISGQEHN

According to WCVB, pepper spray appeared to be used several times.

Boston was one of many cities across the country that saw demonstrations Friday night protesting Floyd’s death in the custody of Minneapolis police on Memorial Day. Bystander video captured a handcuffed Floyd, a black man, pleading that he couldn’t breathe as a white police officer knelt on his neck for almost nine minutes. The four officers involved were fired, and on Friday one of them was charged with third-degree murder and manslaughter in Floyd’s death. 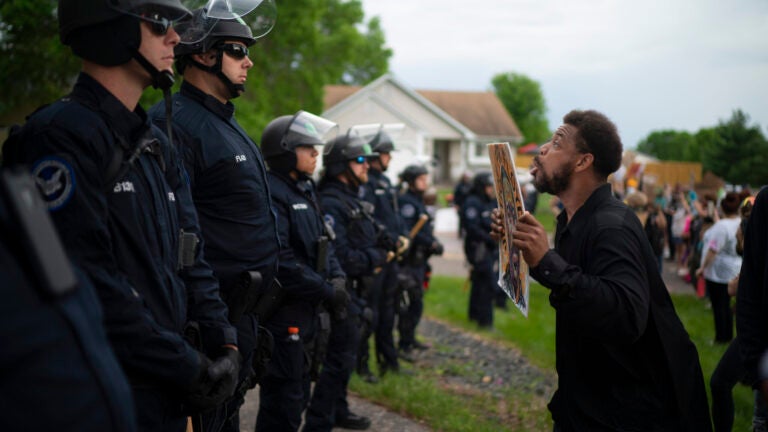