BOSTON (AP) — Thousands of mostly mask-wearing demonstrators marched peacefully through Boston in several protests Sunday, lending their voices to the nationwide anger over the death of George Floyd while in Minneapolis custody.

The largest protest of several thousand started Sunday night in the historically black neighborhood of Roxbury. Protesters, carrying “Black Lives Matter” signs and chanting “The people united will never be defeated,” made their way slowly for several miles to the Massachusetts Statehouse. The diverse crowd was flanked by police officers on bikes and were peaceful.

Earlier in the day, hundreds of people, including several families, marched through downtown Boston on Sunday carrying signs including “Justice For George” and “Silence is Betrayal” and chanting “Hands Up, Don’t Shoot.” Orderly but energized and angry an times, the crowd took over one side of a city street as they passed City Hall, the State House, and the Public Garden.

Some passing motorists honked in support, and in one case, several bikers revved their motorcycles prompting cheers from the crowd. It was also peaceful. The demonstration then gathered in Boston Common, an iconic park in the heart of Boston, some kneeling for several minutes in memory of Floyd and raising their fists in the air.

The peaceful nature of the protests were in stark contrast to violence and looting that has rocked cities across the country in recent days in response to the death of Floyd, a black man who died Monday after a white Minneapolis police officer pressed his knee on his neck until he stopped breathing.

People robbed stores Sunday in broad daylight in Philadelphia and Santa Monica, California, and a semitruck drove into a massive crowd of people that took over a portion of a highway in Minneapolis. The only sign of potential trouble in Boston was several boarded up storefronts.

“They keep killing our people. I’m so sick and tired of it,” said Mahira Louis, 15, who was at the afternoon protest with her mother and was leading chants of “George Floyd, Say His Name.” “On the news, every time we say black lives matter they keep silencing us. Things are going to change. It’s going to change around here. They’re not going to kill black people for no reason.”

Others said the killing of Floyd on top of the coronavirus that has disproportionately hit minor communities as well as the job losses made it imperative they come out and protest.

“The recent events between covid, the killing of George Floyd, the injustices this society is sort of predicated on are just surfacing in a very undeniable ways,” said Silvian Castaneda, a 62-year-old social worker from Medford who came to the rally with several family members and friends. “We’ve got to do something.”

The safety concerns of the coronavirus were also on the minds of protesters, many who wore masks but rarely practiced social distancing. They were packed shoulder to shoulder as they marched which had several of them a little anxious.

“It isn’t comfortable to be at home but it’s really uncomfortable to be here, too, and know you’re doing this in the face of the COVID-19 crisis,” said Vivian Lee, 22, who participated with her sister and parents. “But it requires some discomfort for change,” she said.

A third protest featured church leaders who rallied outside Boston Police Headquarters, according to The Boston Globe. After speaking out against police brutality as well as income inequality and lack of coronavirus testing, the crowd observed a moment of silence for 8 minutes and 49 seconds — the amount of time that an officer’s knee was on Floyd’s neck. 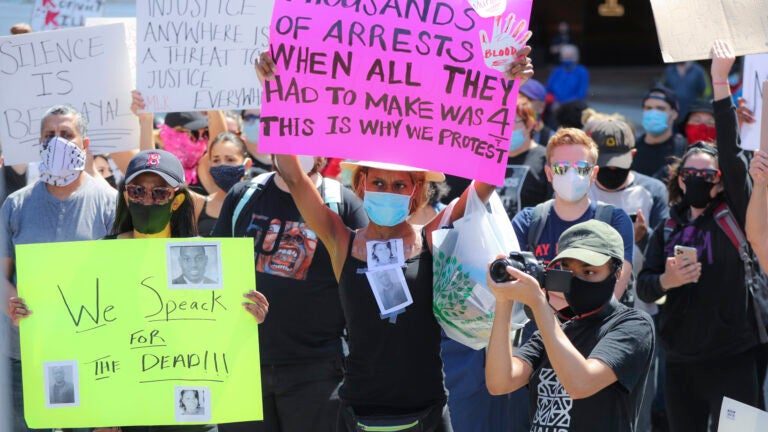 Photos: Another day of demonstrations as protesters march in downtown Boston