Shortly after nightfall Sunday, as the clashes between demonstrators and law enforcement in downtown Boston began to intensify, officers ordered those who had gathered at Boston Common to peacefully protest police violence against people of color to “go home.”

The only problem: They were increasingly running out of options.

Between 9:20 p.m. and 11 p.m. Sunday night, the MBTA closed a dozen downtown stations at the request of law enforcement personnel due to safety concerns, effectively stranding many people who relied on the subway.

The decision drew scores of complaint on social media, including from demonstrators who said they felt unexpectedly “trapped.” Boston City Councilor Julia Mejia said she “had to personally go on two rescue missions to pick up young protesters who were stranded.”

“BPD have been encouraging protesters to leave, yet MBTA has been suspending all forms of transportation this past hour,” Mejia wrote, questioning officials’ efforts to ensure that people “make it home safe.”

BPD have been encouraging protesters to leave, yet MBTA has been suspending all forms of transportation this past hour. I had to personally go on two rescue missions to pick up young protesters who were stranded. How are we ensuring that #AllMeansAll make it home safe? #bospoli https://t.co/v16KCEYFKM

“They turned the peaceful protest into chaos,” Joseph Anton Aiello, a local field coordinator for the Rail Passengers Association, tweeted.

The MBTA Transit Police did not immediately respond to a request for comment.

That made North and South stations the closest options for Green, Orange, Red, and Silver Line riders, as one Twitter user illustrated. Blue Line riders were left without any service south of Airport Station.

Asked about the decision, MBTA Communications Director Joe Pesaturo told Boston.com that MBTA Transit Police “requested that some stations be temporarily closed to prevent dangerous overcrowding on platforms and entrances/exits.”

“With the safety of transit riders, T employees and demonstrators of paramount importance, public safety personnel determined it best to limit access to certain sections of the subway in the downtown area,” Pesaturo said in an email, noting that law enforcement officials have asked the MBTA to close select stations over similar crowding concerns during other mass gatherings.

And while the MBTA has provided increased service for mass gatherings like sports championship parades and the Women’s March in 2017, which respectively drew hundreds of thousands of attendees downtown, Pesaturo says there were also temporary station closures during those events. But not since the Boston Marathon bombing manhunt have as many MBTA stations been closed for a non-weather-related event.

Boston Mayor Marty Walsh said Monday that 20,000 demonstrators attended the protests Sunday, which he said was more than expected. Asked about the decision to suspend some MBTA service, Walsh stressed that “just the downtown stations” were affected.

“North Station was open and the surrounding ones — just the perimeter — because it got a little scary in Downtown Crossing and those areas, with protesters and people breaking windows and turning violent,” the mayor said.

Walsh declined to weigh in on whether the decision eased or exacerbated the tensions.

Boston Police announced Monday that they arrested 53 people on charges related to destruction of property, assault, disorderly conduct, and looting.

But according to Pesaturo, the MBTA — which has been running reduced service due to the coronavirus pandemic — was able to avoid any rider injuries or property damage Sunday night, “allowing regularly scheduled service to resume at all stations first thing Monday morning.” 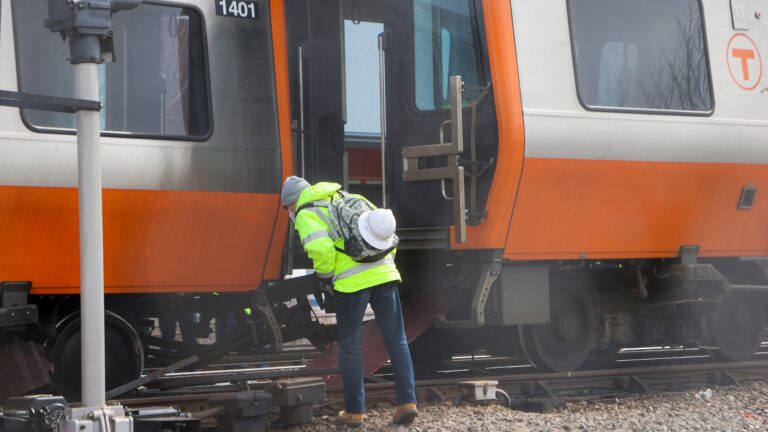