As thousands of people peacefully demonstrated in Boston on Tuesday against the killing of George Floyd and other Black Americans by law enforcement, there were moments when police officers showed solidarity with protesters.

Outside the headquarters for the Boston Police Department, officers took a knee in response to calls from protesters.

In video, Officer Kim Tavares can be seen urging the cheering crowd to do so as well.

Powerful moment outside #Boston police HQ, where a large crowd of protesters cheer after @BostonPolice officers “take a knee” amid #BostonProtests. https://t.co/azjujPKrtg pic.twitter.com/06RpfYVonf

“All police officers don’t think the same,” Tavares told WCVB. “Black lives do matter. When you have stuff like this, you still have to show them love.”

I appreciate those officers who knelt with us tonight. Only 2 stood officers (national guard) while we all knelt. It took leadership of a Black Woman Superintendent and I appreciate her for that and so did each and everyone present. #BlackLivesMatter

Boston police called the moment a “deep meaning and emotional gesture” that underscores the “the humanity of our officers and their undeniable desire to act in solidarity with our community.”

A deep meaning and emotional gesture outside #BPD Headquarters earlier tonight underscoring and speaking to the humanity of our officers and their undeniable desire to act in solidarity with our community. https://t.co/dFZhCfmbZr

A similar moment occurred at the Forest Hills MBTA Station, with a few Transit Police officers kneeling in response to calls from demonstrators.

There are officers here with black vests, helmets, and shields and the crowd started chanting “take a knee! Take a knee!” And then at least a few of the officers did. The crowd erupted with cheers. pic.twitter.com/bxJcOz2kxl

Just now, after the crowds began chanting “Take a knee” a couple of officers here in Boston actually did. pic.twitter.com/8pXpcC05uS

Someone just threw something at Boston Police. People are getting riled. Transit police took their place in front of the station and have shields up and helmets on. There is a much smaller crowd. Some are leaving. Others are kneeling asking them to kneel. Transit police did. pic.twitter.com/v8l3cuD5WN

Protesters take a knee. A few Transit Police officers doing that along with them at Forest Hills T station. #WCVB pic.twitter.com/849XAu0UDJ

Boston police said only two individuals were arrested during the course of the evening. 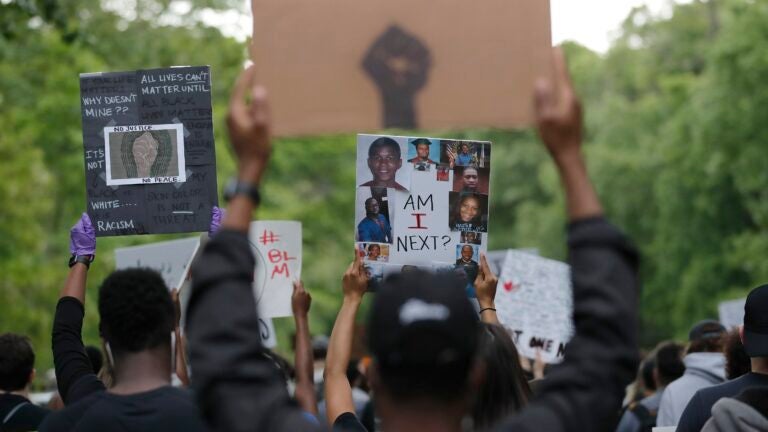