“While you quickly and cavalierly label all police officers murderers, the fact is that BPD officers responded to violent attacks against them with courage and restraint,” BPPA President Lawrence Calderone and Vice President Richard Withington wrote to Rollins. “Instead of slandering our officers as murderers, you should be highlighting their professionalism and dedication to our city.”

The letter was sent a day after Rollins took to the podium at City Hall in the wake of violent demonstrations that followed a peaceful protest against police brutality on Sunday night.

The Democratic district attorney condemned attacks against police and vowed to prosecute the 53 individuals arrested and one person who was issued a court summons the night before.

But Rollins also said she shares the outrage that drew protesters to the streets in the wake of the death of George Floyd, the Black man who was killed in police custody in Minneapolis last week.

She told reporters she’s exhausted, and that “as your elected district attorney, we have looked around this country and seen police officers — people that Black lives pay taxes to fund these positions — shoot us in the street as if we were animals.”

“People are disgusted and outraged, and they should be,” she added. “And it is completely ironic to have to say to you, ‘Please don’t be violent. Please keep your voice down. Please be silent and comply with all of the police’s requirements,’ when in fact it’s those very people that murder us with impunity. But that’s where we are right now.”

Rollins’ statements came on the heels of a tweet she posted Saturday urging for change.

“Ahmaud Arbery. George Floyd. Breonna Taylor. Tony McDade. Christian Cooper. While we are being murdered at will by the police & their proxy, privileged racists like Amy Cooper play the victim,” Rollins wrote. “No more apologies. No more words. Demand action. Radical change now. Nothing less.”

Ahmaud Arbery. George Floyd. Breonna Taylor. Tony McDade. Christian Cooper. While we are being murdered at will by the police & their proxy, privileged racists like Amy Cooper play the victim. No more apologies. No more words. Demand action. Radical change now. Nothing less. ✊🏾

In their letter, Calderone and Withington slammed the remarks as “reckless statements labeling all police officers ‘murderers'” that “undoubtedly incited violence” against police.

Her words put the lives of Boston police officers at risk as they patrolled the streets during Sunday’s demonstrations, they said.

“On Sunday, BPPA members were there to protect the thousands who sought to peacefully raise their voices through ‘words,'” they wrote. “Unfortunately, after dark, some protestors took ‘action’ — by violently attacking police officers. Still our officers responded, as they always do, by protecting the city and each other. A job made all the more difficult because of your reckless tweet calling for ‘no more words,’ which was followed within 24 hours with violence against the police, the likes of which this city has not seen in a generation.”

You mean Anti-Police BRUTALITY. And did I somehow miss BPPA’s letter denouncing the murder of George Floyd and calling for the immediate termination and prosecution of the 4 police that murdered him and/or watched and did nothing while he died? White fragility is real people. 🐴 https://t.co/Q0BQWT2n3I

Calderone and Withington continued their letter by condemning Rollins for doubling down on “shameful attacks on police officers” Monday.

“As the chief law enforcement officer in Suffolk County, it was utterly inappropriate for you to make a statement mocking violence,” the officials wrote, in reference to Rollins’ statement about the irony in issuing calls for peace and cooperation. “You saw our city on Sunday night. And we know you saw BPD officers put their lives on the line to keep our city safe. Yet, you accuse us of ‘murder … with impunity’ — that is disgraceful.”

Rollins responded to the BPPA letter on Twitter Tuesday night, stating that her remarks were not “anti-police” but rather “anti-police brutality.”

“And did I somehow miss BPPA’s letter denouncing the murder of George Floyd and calling for the immediate termination and prosecution of the 4 police that murdered him and/or watched and did nothing while he died?” she added. “White fragility is real, people.”

Earlier on Tuesday, Rollins was among the state’s top political leaders of color who spoke out in a push for change on the State House steps.

Rollins thanked “the overwhelming majority of members of law enforcement who go to work every day and do a job none of us would sign up for, even if it was three times the salary.”

“They put themselves at risk every day,” she added. “Situations change in an instant and they have to make life and death decisions. We know that. We aren’t here because of the good and honorable and culturally competent and de-escalation-able officers. We’re here for the other ones.” 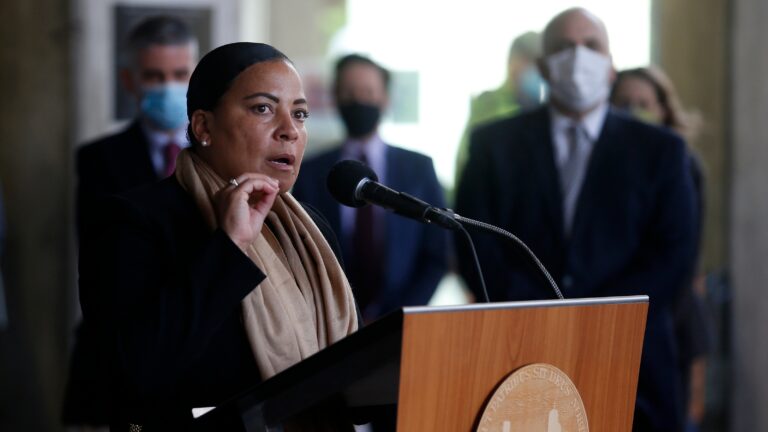 Rachael Rollins: ‘People are disgusted and outraged, and they should be’