Northeastern’s former deputy athletic director for external affairs said in a video Monday that six Newton police officers drew their guns on him in an incident he describes as racial profiling, five days before George Floyd was killed in Minneapolis police custody May 25.

Tim Duncan, who still has a home in Newton after taking over as athletic director at the University of New Orleans last year, said he was walking with his wife when he was stopped by four police cars and the six officers, who told him he fit the description of a suspected murderer.

Duncan said he spoke to student-athletes at New Orleans before making his statement, which detailed his personal experience while expressing anger at the deaths of Floyd and Ahmaud Arbery, a Black man who was murdered while running in Georgia.

“I know that it’s been over a week now since the murder [of Floyd] has occurred and I haven’t said anything publicly, and I wanted to take some time to think about that,” Duncan said in the video that he shared to YouTube, Twitter, and Instagram. “I’m disappointed in myself over the last few years in my life because I had begun to normalize these situations. I remember that talk that my mom and dad had given me about race and police from the time that I was a child.

“It’s not OK that just because I’m a tall Black man walking one block from his house, that I’m pulled over and say that I fit a profile of a murder suspect just because he was tall. I understand the police have to do their job, trust me, I do. But to roll down on me with guns drawn when I’m walking on a beautiful Wednesday afternoon with my wife is uncalled for.

“And it’s uncalled for that George Floyd had a knee on his neck for eight minutes and, I think, 46 seconds. It’s uncalled for that Ahmaud Arbery was running through a neighborhood – I’m a runner. I run through these neighborhoods all the time – and someone hunted him down and killed him. This stuff has happened way too much. I’m pissed. I’m outraged.”

The Newton Police Department said in a statement that officers were “staking out the home and the vicinity” of an address in Newton when they saw Duncan, “a suspect who fit the physical description of the murder suspect,” according to The Boston Globe.

The statement continued with a description of the incident, which lasted three minutes, according to police:

The suspect in the murder, which occurred in Boston, was taken into custody by Boston Police the following day, when he exited the address that was under surveillance, according to the Newton Police.

Newton Police Department public information officer Bruce Apotheker told the Globe that “nobody should go through” what Duncan experienced.

“To me, there’s nothing more important in this world than someone’s civil rights, dignity, and human rights for someone to feel that any of those have been violated, to me that’s a horrible experience,” he said.

Apotheker told the Globe he would be willing to speak with Duncan, who can file a grievance with the department.

“It is completely unacceptable that six Newton police drew their weapons on a man out for a walk with his wife. I can’t imagine how terrifying this must have been for Mr. Duncan and his wife. I’m thankful to him for speaking out and sharing his story, and I’m glad that Newton PD is saying nobody should go through what he did, but now it’s time for action to be taken to ensure this does not happen again.” 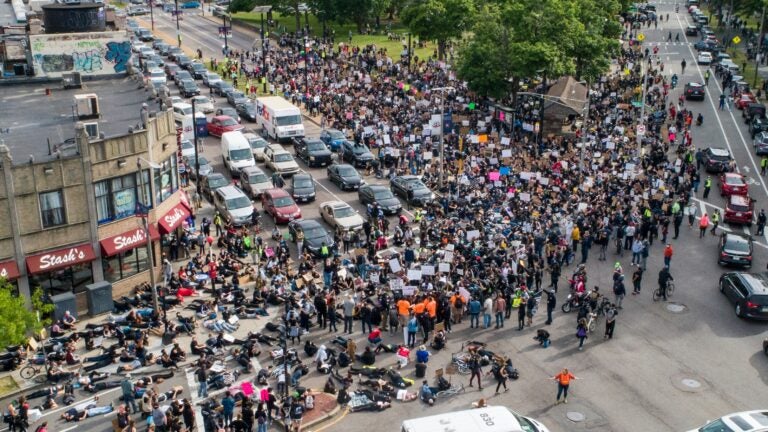 12 photos of the latest peaceful protests in Boston