Following another peaceful protest this week against police brutality the night before, Mayor Marty Walsh on Wednesday encouraged white people to listen to their Black neighbors and learn from their experiences.

“I’ve been meeting with our Black employees and employers of color. I’ve been listening, and, to be quite honest, what I’ve been hearing has been heartbreaking,” Walsh said during a press conference. “As a white person, you can and should be opposed to racism. You can learn and understand the effects of how it affects people.

“But when you make the space for people to open up, truly open up, when you really hear daily experiences of racism and what it means to people, particularly our Black employees, it deepens the perspective and it strengthens our resolve to be an ally and push for change,” he said. “That’s what I’m trying to do.”

Amid the anger, sorrow, and frustration that’s wrapped around the country in the wake of the death of George Floyd, the Black man killed in police custody in Minneapolis last week, Walsh said it’s time for white people to lend their ears to the experiences and issues faced by people of color.

It’s something Walsh says he’s been doing at City Hall.

Over the last three days, the mayor said he’s spoken with employees — from department heads to entry-level workers — and watched as they “opened up” about their experiences, and he often watched the reactions of their white co-workers as well.

“Some people honestly said, department heads and cabinet level (people said), ‘I don’t know what to do right now. I don’t know how to respond right now.’ And the response is, ‘Let’s just listen for a while,'” Walsh said. “Let’s not give opinions. Let’s not criticize. Let’s not judge. Let’s listen, because if we listen, we’ll be a stronger city for it.”

Walsh, a recovering alcoholic with 25 years of sobriety, also evoked the serenity prayer, which he says has helped him remain sober: “God, grant me the serenity to accept the things I cannot change, the courage to change the things I can, and the wisdom to know the difference.”

“What we’re dealing with in Boston is about wisdom,” Walsh said. “Wisdom to listen. Wisdom to understand. If you don’t understand right now, just listen.”

Asked whether there is enough oversight and accountability of the Boston Police Department, Walsh pointed to some changes in recent years, such as the creation of the agency’s body camera program. The department also does not train its officers to use chokehold tactics when subduing a potential suspect, he said.

But he added that reviewing protocol and operations is an evolving process, and that the city could look into whether to expand the function of the Community Ombudsman Oversight Panel, the independent, civilian group appointed by the mayor that reviews complaints against the department’s Internal Investigation team. 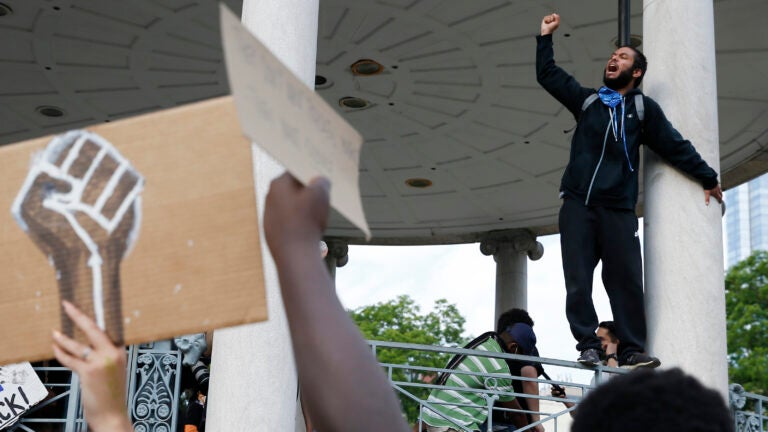 ‘A nation in peril’: In Boston and throughout the U.S., the NAACP grapples with a state of emergency