In a lengthy statement Wednesday night, Poftak said the decision to close a dozen downtown Boston stations through the end of service Sunday night — after a mostly peaceful protest led into clashes with police — was made “in coordination with local officials and local law enforcement entities” after an on-scene representative of the MBTA Transit Police determined that “outside activity posed a danger to the safe operation of the station and transit activity.”

“As many likely saw on television, social media, or in person, it was a very unsettled scene and a fluid situation,” Poftak said.

“A disorderly situation in a station poses significant risks to riders, T employees, and critical T assets such as vehicles and signal systems,” he continued. “An accident, a deliberate act, or trespassing poses a significant risk of an incident — including contact with the third rail, potential to be struck by a moving vehicle, injury to another rider or employee, and a risk to our employees and customers in the form of secondary trauma due to the injuries caused and/or witnessed.”

MBTA officials noted that regularly scheduled service was subsequently able to resume at all stations Monday morning, after no injuries or property damage were reported on the system Sunday night.

The explanation comes amid increasing criticism from some local elected officials and transit advocates. During the protests Sunday night, Boston City Councilor Julia Mejia said she had to go on two “rescue missions” to pick up protesters who were stranded by the closures, which began around 9:22 p.m. with Park Street and Downtown Crossing and progressively spread to eight other downtown stations over the next 90 minutes. In total, trains were instructed to bypass a dozen stations, and all Blue Line diversion shuttle service downtown was suspended through the end of the night.

As WBUR reported, the closures forced dozens of people who were already inside Park Street station — attempting to go home — to pour back into the packed and increasingly tense streets, where police used tear gas to disperse the crowd.

“Shutting down the four main transfer hubs and most other downtown stations effectively stranded hundreds and severely inconvenienced hundreds more,” the advocacy group TransitMatters said in a statement Thursday, adding that the “bar for closures related to safety needs to be high.”

“If a [9 p.m.] curfew is in place, people need a functioning transit system easy to access in order to get home,” Jim Aloisi, a former Massachusetts transportation secretary, tweeted Wednesday. “You can’t play Catch 22 w/peaceful protestors who need access home by shutting down nearby stations.”

4/If police order to disperse is given, people need a functioning transit system to disperse peacefully. Shutting nearby stations down escalates the problem. Does it put public property at risk? I don’t make that assumption but I understand it could. I err on the side of freedom.

“Shutting nearby stations down escalates the problem,” Aloisi added. “Does it put public property at risk? I don’t make that assumption but I understand it could. I err on the side of freedom.”

The MBTA has closed select stations during much larger rallies and demonstrations, from the Boston Marathon to other political protests to championship parades. Compared to the bigger-than-expected 20,000-person rally Sunday, those events regularly attract up to several hundred thousand attendees. And yet, the MBTA has never closed as many stations for a non-weather event since the systemwide shutdown during the 2013 Marathon bombing manhunt.

During subsequent protests this week in Boston, the MBTA again closed stations, albeit at a smaller scale. Park Street, Downtown Crossing, and Chinatown stations were briefly closed Tuesday night, with the agency suggesting nearby stations as an alternative.

Orange Line: At the request of the police, Trains are bypassing Chinatown until further notice. Alternative service: Haymarket or Tufts Medical.

During a protest Wednesday, service was suspended for roughly 30 minutes at Park Street and Downtown Crossing. Commuter rail trains also bypassed the Brockton Station during protests in the city Tuesday and Wednesday night.

Poftak said Wednesday that the MBTA has “no policies or directives to keep people in one place.”

“Our preference at the MBTA is always to provide service to our customers unless safety concerns necessitate closure,” he said.

TransitMatters shot back Thursday that the use of the word “preference” reflects a “peculiar mindset” at the agency.

“It is the duty and responsibility of the MBTA to provide service to the public,” the group said.

The General Manager’s statement, “it is our preference at the @MBTA to always provide service to our customers unless safety concerns necessitate closure” reflects a peculiar mindset. It is the duty and responsibility of the MBTA to provide service to the public.

Still, Poftak said he was hopeful his explanation might at least help “clarify how the MBTA and the Transit Police Department made decisions this week to balance safety with our responsibilities to our riders and employees.” He also acknowledged the “pain” that the killing of George Floyd, “the most recent in a long line of injustice against African Americans,” had caused in the community.

“I want to offer my support for the people who are marching for justice in our communities,” Poftak said. “The civil unrest that has followed some of these events is unfortunate, but should not obscure the important message that is being sent.” 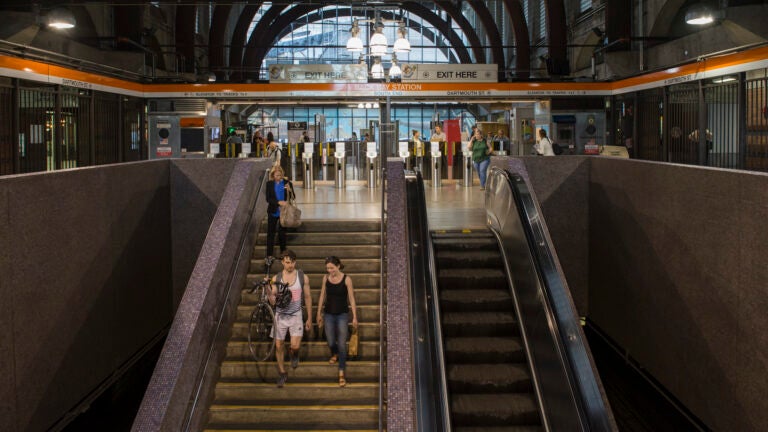 9 injured in escalator malfunction at Back Bay MBTA station