Multiple protests are planned for the Greater Boston area on Sunday as communities continue to call for justice for George Floyd, the Black man killed while being taken into custody by Minneapolis police on May 25.

In Boston, a Peaceful Children’s March is scheduled for 3 p.m. starting at the bus depot in Nubian Square in Roxbury and stopping at the Boston Police Headquarters in Roxbury Crossing. Children with parents are welcome, masks encouraged.

At 4 p.m., Answer Coalition Boston and Cosecha Massachusetts have scheduled a speakout and march called “Unite Against Racist Police Terror” at the Boston City Hall Plaza. The event is calling for defunding the police, and pulling the National Guard.

From noon until 2 p.m. at Cambridge Common, there’s a peaceful protest scheduled, which is planned to include input from student activists and community leaders, according to a tweet from My Brother’s Keeper Taskforce, an organization that mentors boys and young men of color.

“It’s time we come together and take a stand against police brutality,” a tweet about the protest says. “Elevate your voice and speak truth to power.”

It’s time we come together and take a stand against police brutality. Elevate your voice and speak truth to power.

Hear from student activists and community leaders this Sunday as we rally peacefully at Cambridge Common from 12:00 PM to 2:00 PM. #TheMovementContinues pic.twitter.com/SKg2Ubo7wu

In Lawrence, city officials have designated Campagnone Common, across from City Hall, as the space for a peaceful protest, set for between 2 and 4 p.m., according to a joint statement from Mayor Daniel Rivera and city police Chief Roy Vasque. Participants are encouraged to socially distance and wear a mask.

“The Lawrence community has dealt with high levels of crisis throughout these last couple years from Columbia Gas explosions to the current pandemic we are in now,” the statement said. “With that being said we hope that, as during those times, we can come together in peaceful unity and in support of one another.”

There are multiple other protests scheduled in cities and towns around the Greater Boston region, including Newton, Lynn, Everett, and Somerville. For more information on events outside of Boston, check out the Wonderland blog. 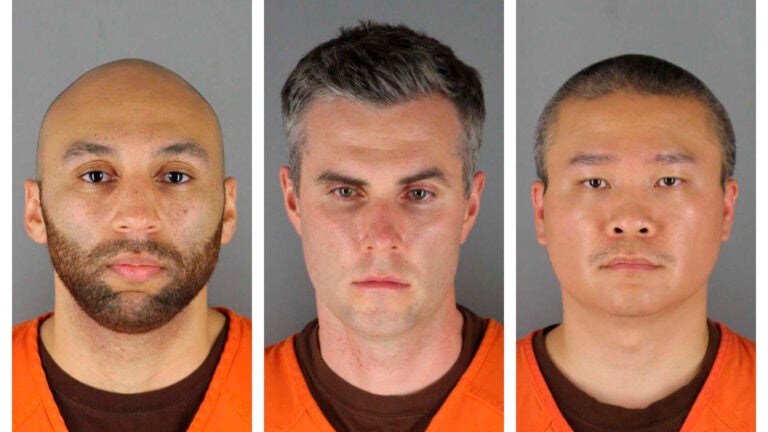 Duty to intervene: Floyd cops spoke up but didn’t step in