The decision by a popular Rhode Island doughnut shop to end its policy of offering discounts to police and military members in uniform drew backlash and support from customers over the weekend as its owner called for earnest conversations around racism and social injustice.

Allie’s Donuts in North Kingston posted an Instagram story to announce the change after a Black Providence firefighter said he was racially profiled by a pair of city police officers on June 2.

“We’re fed up,” the store said in its post. “Until local police takes action to solve problems with racism and injustice, Allie’s Donuts will choose to stand with the people of our great state.

“We will no longer offer military or police discounts,” the post continued. “Thank you for your service, and shame on you for your silence.”

Firefighter Terrell Paci, 23, told WPRI-TV in an emotional interview Friday that he was on duty in uniform, sitting in a car outside of his fire station and chatting with his friend who was dropping off food, when two police officers approached him with guns drawn.

The officers, who have not been identified, demanded to know if he was armed, according to Paci.

“I was dressed in full uniform and had my radio in hand,” said Paci, who spoke to the news station at a protest rally that drew over 10,000 people.

“I was like, ‘I’m a firefighter, I’m PFD, I’m one of you — don’t shoot,’ and they still kept approaching the vehicle with guns drawn,” Paci said as he fought back tears.

One of the officers searched Paci’s friend’s car before leaving, he said. A Providence police sergeant went to the fire station hours later and apologized after the incident was caught on body camera footage, Paci said.

“All it takes for evil to triumph is for good people to do nothing,” he said. “And we can’t do nothing.”

On Instagram, Allie’s Donuts wrote to the officers involved, calling the incident “an example of terrible job performance.”

“If you were an athlete, you would be cut from your team. If you were our employee, we would fire you immediately,” the post said. “But you are a police officer. And despite being the ones responsible for protecting the law, you may be considered ‘above it’ and face ZERO consequences for your mistakes.” 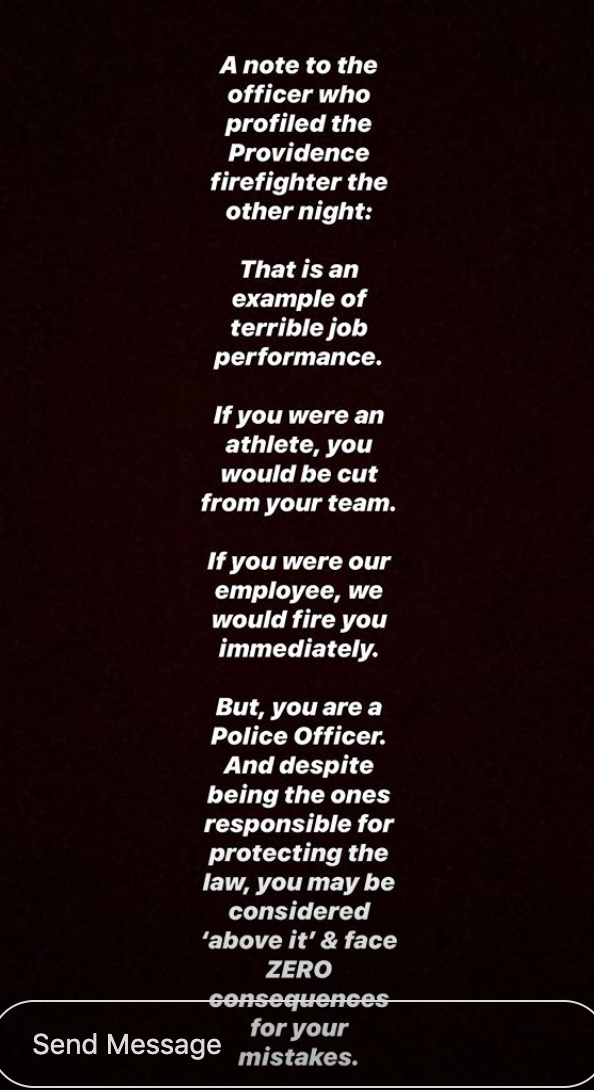 The comments generated swift push back, with many individuals saying the store lost their business because of the decision to take away discounts to customers in uniform.

“I hope you are never in a position where you need the police for help. You obviously don’t have any respect for them,” one commenter wrote on the business’s Facebook page. “You should be grateful we have wonderful police in R.I. I will never give you my business having that attitude.”

The North Kingstown Police Department called the store’s remarks “divisive” in a Facebook post Saturday that was deleted Monday.

“We certainly do not need nor want a discount, however this message of targeting … your police and fire departments, your local military and your veterans is distasteful — let’s start talking about how to lift UP our community and not tear it down — police themselves aren’t the problem — racism is the problem,” police wrote on Facebook. “Thank you to our community for the love.”

In an over 14-minute-long video Sunday, Matt Drescher, owner of Allie’s Donuts, spoke about why the decision was made, saying he “wanted to take away a privilege from people so that we can all be equal.”

Drescher, who said the store quickly sold out of doughnuts earlier in the day, also called for people with different opinions to come together to discuss solutions for longstanding problems in the country around racism and to acknowledge that those issues exist and need to be addressed.

Dear Rhode Island. We have some explaining to do… we hope that you are willing to stand and speak up with us during these very important and troubling times in America. We thank you all for your love, for your concern, and for your sacrifices. If you have the time, please read more about our stance in our story. #Together #itTakesAVillage #Love #Respect #Equality

“I will say that ignorance is not bliss and if you’re quiet, you’re part of the problem,” he said in the video, which had garnered over 20,000 views by Monday afternoon. “Like why am I speaking up? I just make doughnuts, right? It’s cause we all matter and our voices matter. Let’s use them.”

Drescher clarified he does not “hate” members of the military and added that his earlier remarks were “a little bit of a disservice” to them and “all of the police officers who do good in society.”

He said that that wasn’t the point of his remarks and the approach in announcing the change was wrong, but also that he stands by his message.

“I’m sorry. I’m sorry if you were offended that we had to take action. I’m sorry that I disrespected your sacrifice and duty to the people of this country that you don’t even know,” he said. “But I stand by my statement. We have to stand up for the people who have been wronged for ages, for years. Like, why wouldn’t we want to stand up for them? Black people built this country, you know?”

Matt discusses how he feels things went over the last 24 hours. He discusses power, influence, communication, respect, and humility. He loves who he loves. He respects everyone else.

Meanwhile, Paci’s statements regarding his encounter with authorities came under fire this weekend by the Providence Fraternal Order of Police Lodge 3, which released a statement Saturday rebuking the account, saying officers were investigating an attempted armed robbery in the area, followed protocol, and “at no time did the officers display any act that could be construed as racial profiling.”

“The officers involved conducted themselves in a professional manner,” the Executive Board wrote. “To have someone embellish what took place to grab a headline, especially in a time of turmoil, is the exact toxic nature of which we all are trying to move away from.”

The police union said the officers were responding to a report of a man breaking into businesses on Cranston Street when two witnesses at the scene said they saw a man running from the area.

According to the statement, as the officers were canvassing, another person flagged them down, saying a few minutes earlier a red vehicle with two occupants had pulled up to him and his friend and the two individuals had exited the vehicle, displayed a firearm and a knife, and demanded money from him before he and his friend “ran away fearing for their lives.”

The man told police a red vehicle parked in front of the firehouse may have been the one that approached them, according to the union.

“With weapons drawn, as trained to do, the officers asked the occupants of the vehicle to show their hands and exit the vehicle,” the union said. “The subjects exited the vehicle and were identified as a Providence firefighter and female occupant, and at this time the officers immediately re-holstered their firearms. The officers explained the reason why they were there.”

The statement continued: “Out of an abundance of caution, one officer asked the driver if he could search the front compartment of the vehicle, and the female operator consented to the brief search. The search was conducted to remove any question of a firearm within the front compartment of the vehicle. The officers concluded the stop and apologized for any misunderstanding or inconvenience.”

The union added that it is “sad and disgusting that a Providence firefighter would distort the truth about our police officers” and took aim at Derek Silva, president of the Providence Firefighters Union, who said Friday that his union stood with Paci.

Statement from the Providence Fraternal Order of Police strongly defending the officers accused of racially profiling a firefighter.

“It is sad and disgusting that a Providence firefighter would distort the truth about our police officers.” pic.twitter.com/idaqMv6eea

On Monday however, the police union said it has “no issues with the Providence Fire Department or any of its firefighters.”

“We respect and appreciate the department and its firefighters,” the union said in a Facebook post. “However, we do find it deeply disturbing that a firefighter would not only embellish an ordeal, but also that the Fire Department Union President (with whom we have previously had a good working relationship), would make divisive comments during this difficult time without understanding the entirety behind the events or waiting for a completed investigation. Providence FOP Lodge 3 hopes that the completed investigation will help both departments move forward in a productive manner.”

Silva said in his statement posted to Twitter Friday that the organization stood with Paci, writing that he and his friend were profiled by police.

“This situation makes clear that even in uniform, a young black man is not immune from the impact of systemic institutional racism,” Silva said. “While we value our working relationship with the Providence police, and know that there are many officers who are working to change police culture, this incident proves that there is more work to be done.”

We stand with our brother, Terrell Paci… pic.twitter.com/OJYFbGOEl2