A woman took to social media on Tuesday after calling out a man in Watertown when she saw him erasing messages of support for “Black Lives Matter” on the sidewalk.

Mary Burns shared videos on Twitter and said she was cycling through Watertown Square when she saw the messages in chalk being washed away by the man with a mop. The Brighton woman wrote that when she confronted him and asked why he was altering the messages, he replied it was “offensive.”

Burns expressed concern about the man erasing the names of George Floyd and other Black people killed by police. He also erased “Black” from the message “Black Lives Matter,” she said.

“What is so offensive about remembering young black men killed by cops that you seek to erase their names?” she wrote.

1/3 just cycled thru @watertowngov where an old white man with mop & water was erasing “black” from #BlackLivesMattters. I stopped & asked him why he was doing this. It’s “offensive, “divisive” & his “1st amendment right…” https://t.co/a1qvQgDOx8 pic.twitter.com/P9pcsmMWu3

2/3 As I asked him why he was doing this, another older white guy, in a mask, started yelling & swearing at me. Amazing. Called @WatertownPD who could or would not come. @WatertownMANews pic.twitter.com/8mgz5ErFHu

3/3 What is so offensive about remembering young black men killed by cops that you seek to erase their names? #BlackLivesMattters #BlackLivesMatterWatertownMA pic.twitter.com/e1vf3FM3Ih

The man, who was wearing a full face mask during the encounter, told 7News he wasn’t stopping anyone from writing words on the sidewalk, but that it was also his “right to erase those words with a wet mop.”

“As an American citizen, I believe in the right to express yourself,” the man said. “I am, in a social sense, color blind. I do not recognize any race or people.”

A woman confronts a man mopping away messages of support for #blacklivesmatter written in chalk on the sidewalk in Watertown Square.

He says it’s his right to erase the words—while the woman gets emotional defending Black lives. @KerriCorrado has the story #7news pic.twitter.com/Cpkar5LC2m

Crowds of protesters have gathered in Watertown and other cities across the country to demonstrate against the killing of Black Americans by police in the days and weeks since Floyd’s death in Minneapolis. With the outpouring of solidarity around the message “Black Lives Matter,” supporters have reiterated again and again the rallying cry is not a message of division but essential in acknowledging the systemic and institutional racism against Black people in the United States. 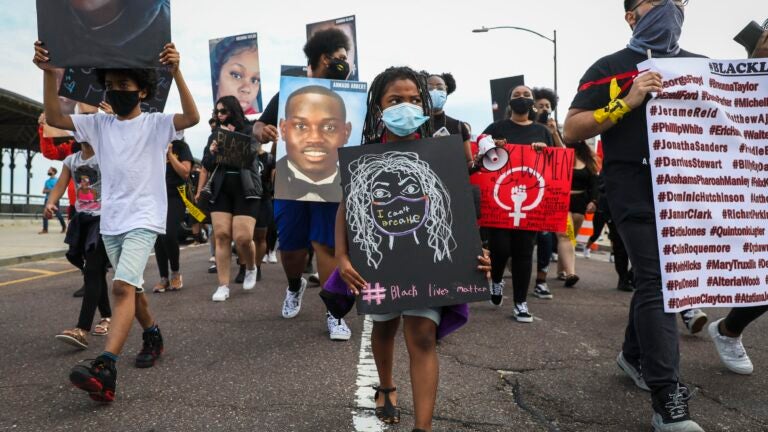 What we know about Wednesday’s locally planned protests, rallies in memory of George Floyd