Protests decrying police violence continued Sunday in Boston and other cities and towns across the region following the killings of George Floyd, Breonna Taylor, and other Black Americans at the hands of law enforcement.

In Boston, a rally was held outside the Boston Public Library, and a prayer, scripture, and song event took place on Boston Common.

Here are photos and social media posts from Sunday’s events. During a “White Coats for Black Lives” rally in front of the Boston Public Library, Alicia Barrow held up her fist while protesters laid face down or took a knee for 8 minutes and 49 seconds, representing the amount of time Minneapolis police officer Derek Chauvin pinned George Floyd to the street with a knee on his neck. Josiah Cassiani, of Boston, held up his fist as he took a knee with other protesters during the “White Coats for Black Lives” rally. Organizers asked physicians and health care workers to wear their white coats or scrubs during the demonstration. Many of the health care workers held signs during the event. 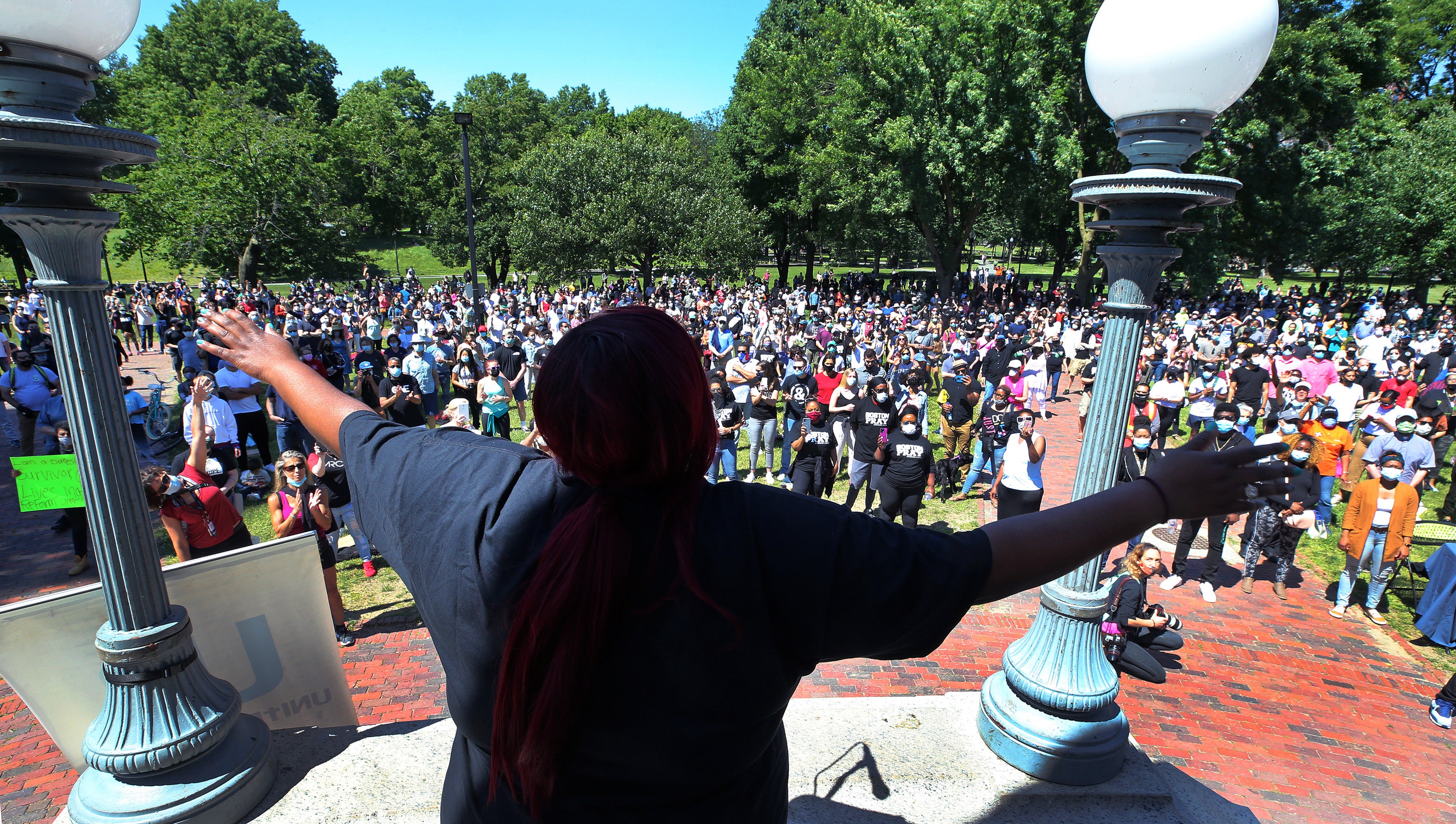 Vynelle White performed a song during a Boston Pray event Sunday afternoon at the Parkman Bandstand on Boston Common. Christians gathered for a prayer, scripture, and song event sponsored by Benjamin Watson and the One More Foundation, Boston Collaborative, UniteBoston, Greater Things for Greater Boston, SEND Boston, and the Black Ministerial Alliance. 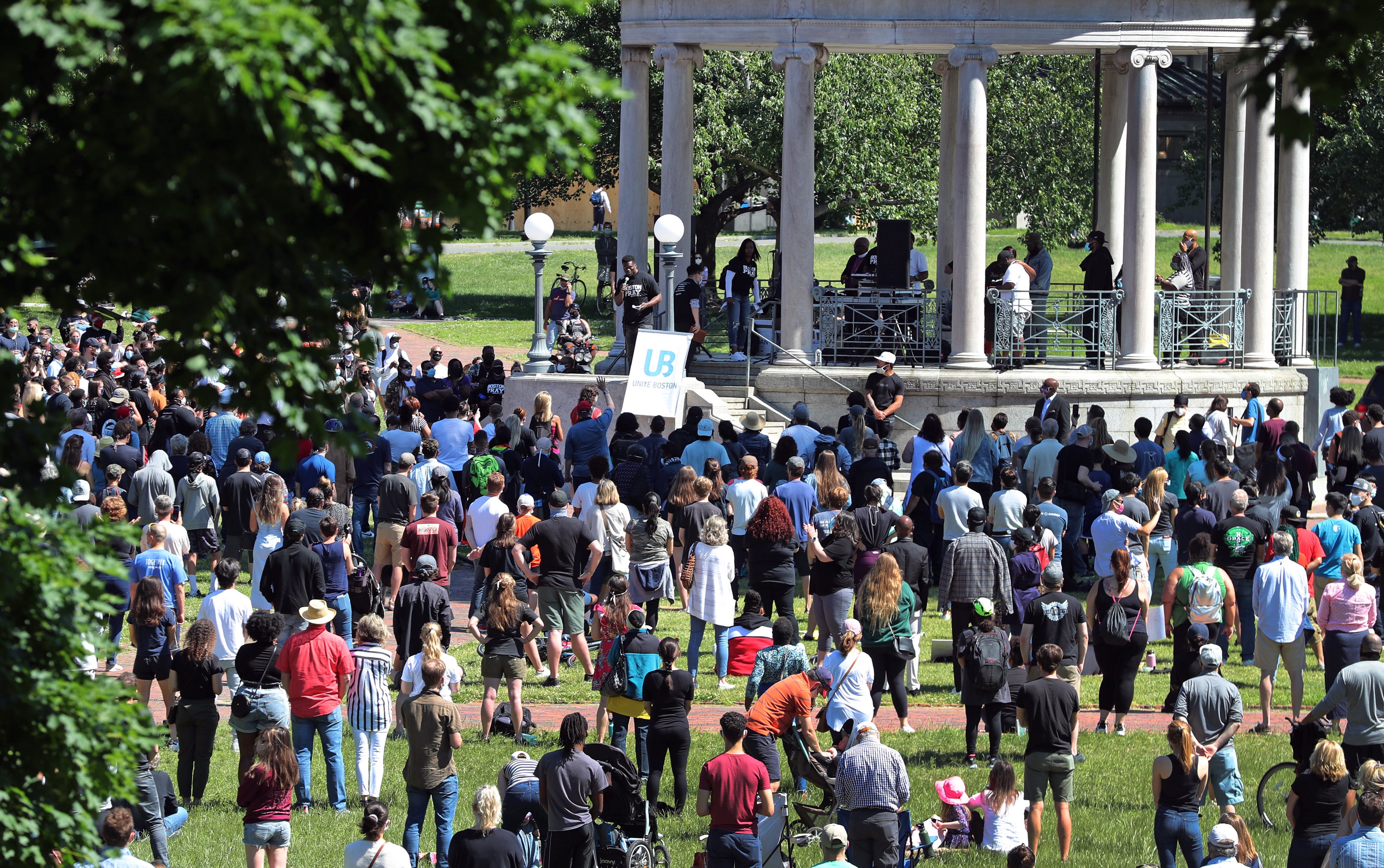 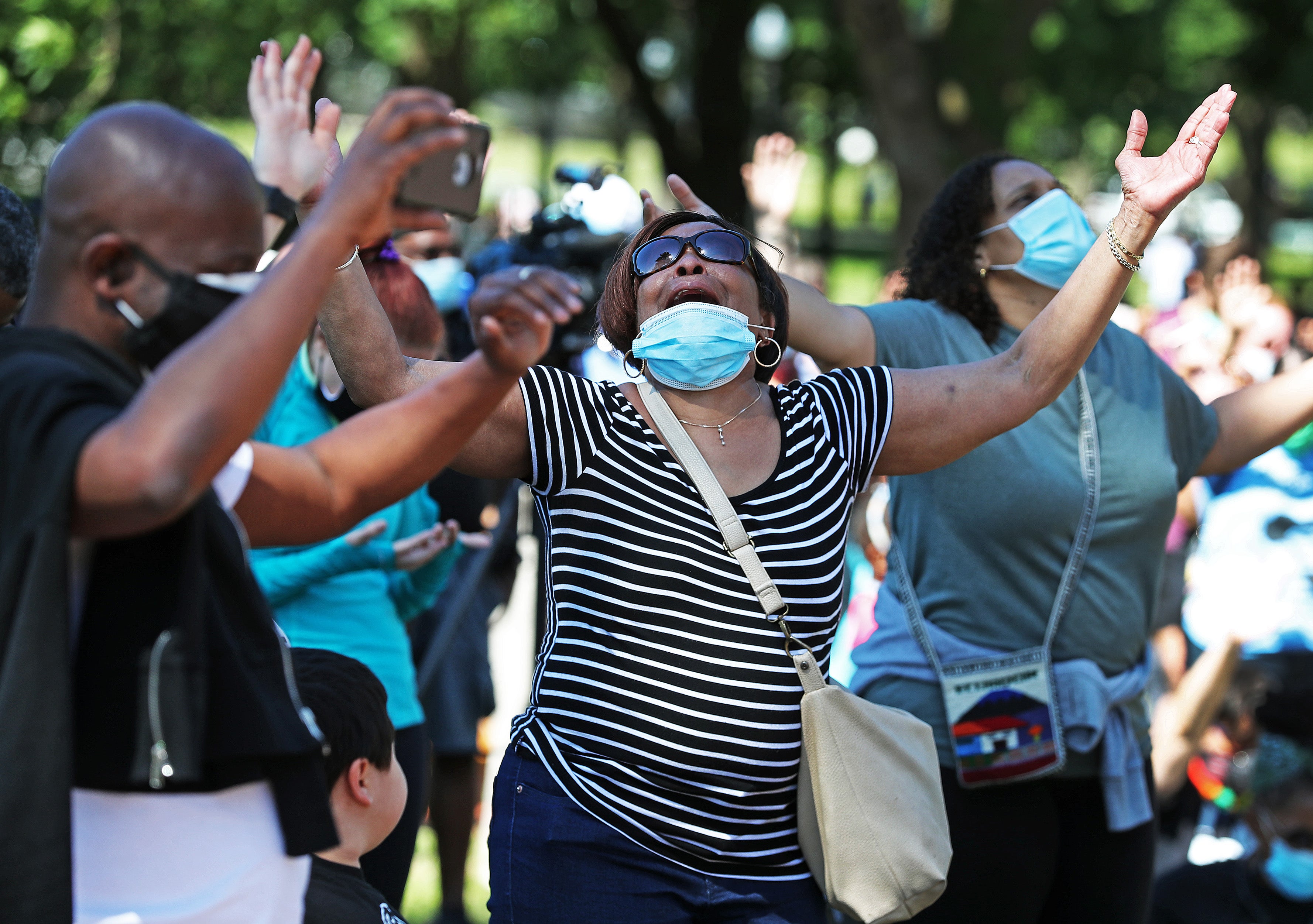 Attendees prayed during the event. 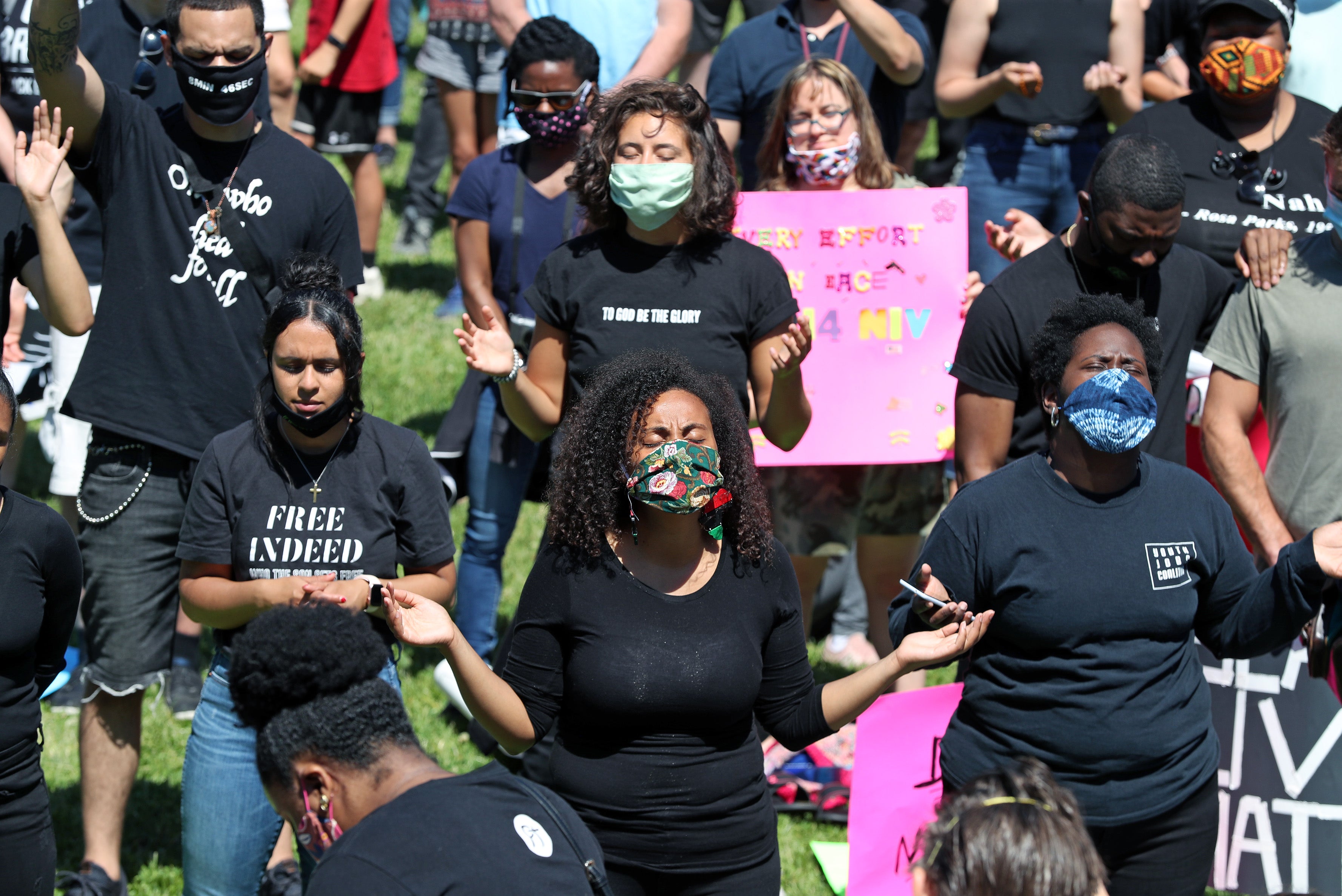 People were called to prayer during the event. 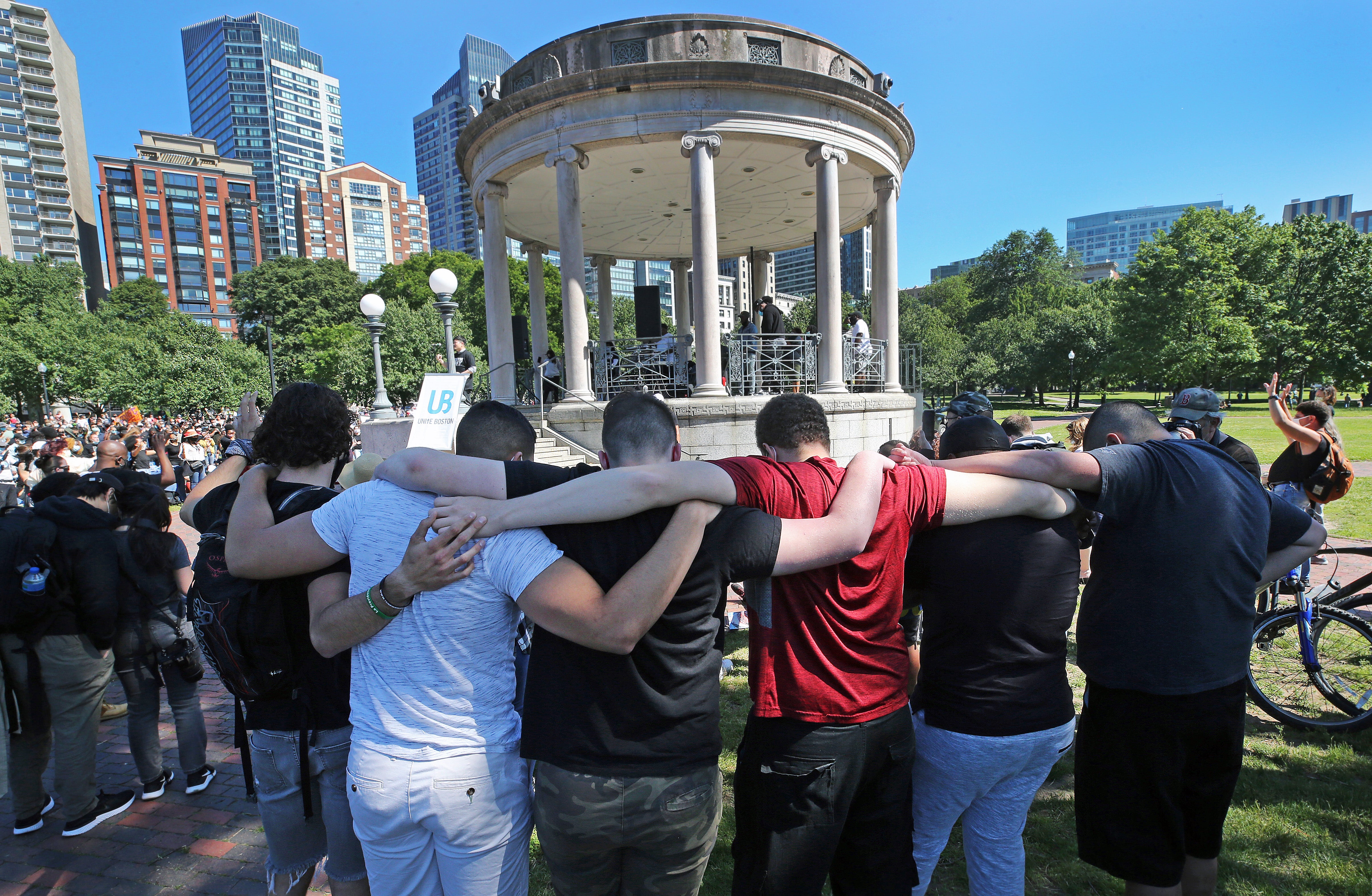 A group locked arms as Pastor Barry Kang led the crowd in prayer. 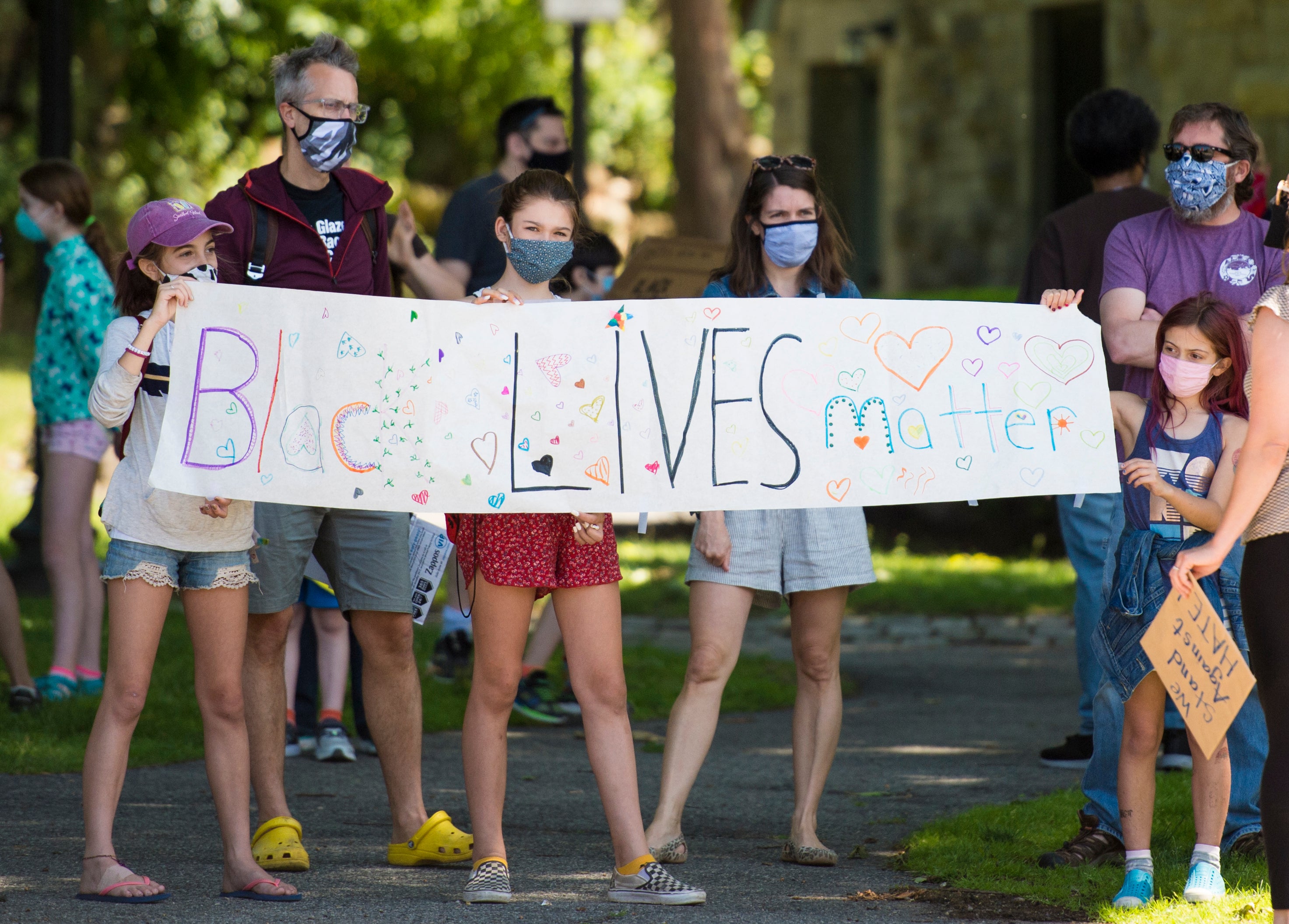 Children and their families gathered in Powderhouse Park in Somerville on Sunday for a Black Lives Matter protest organized by Naomi Nurenberg, a local third grader. 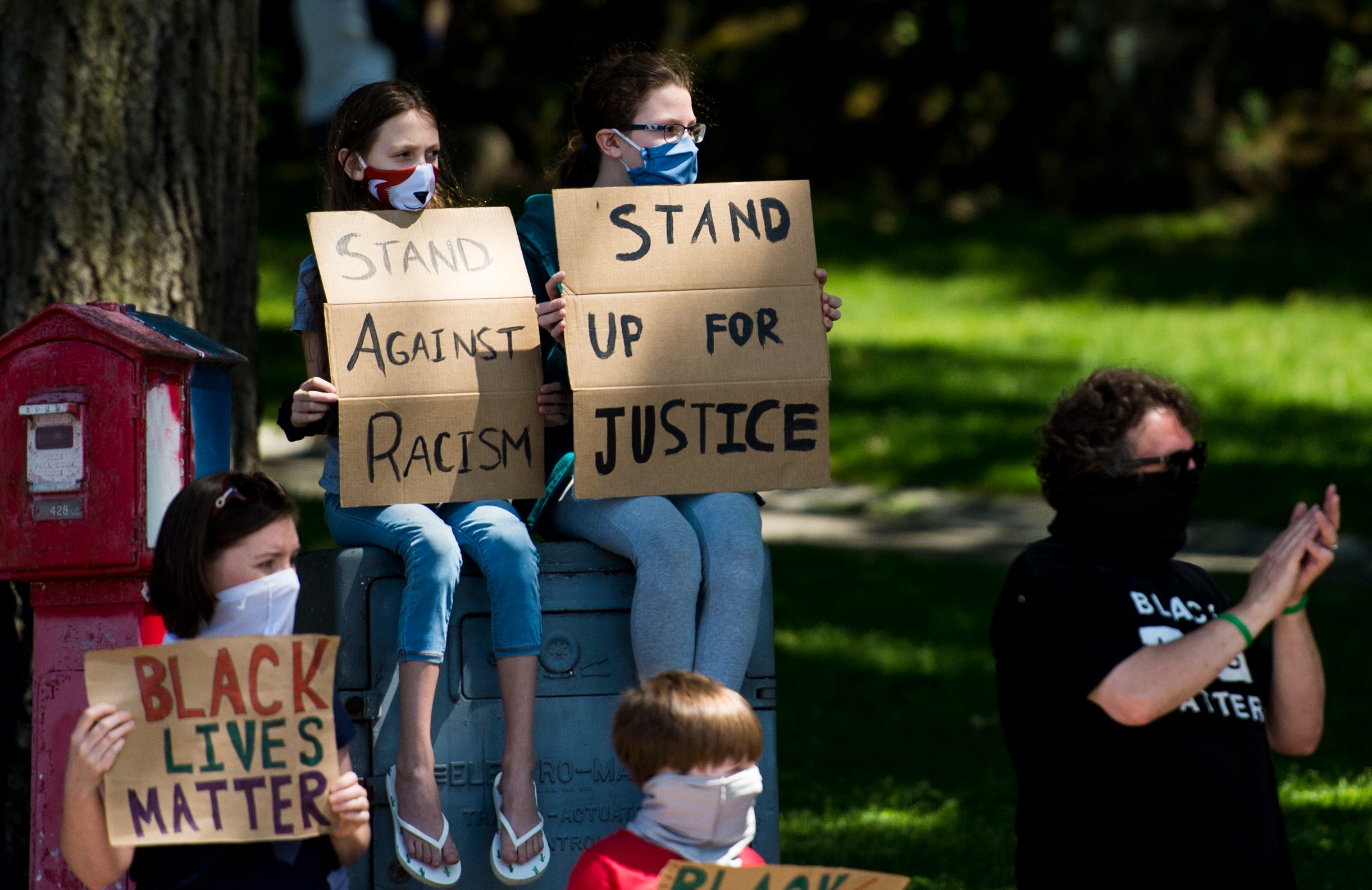 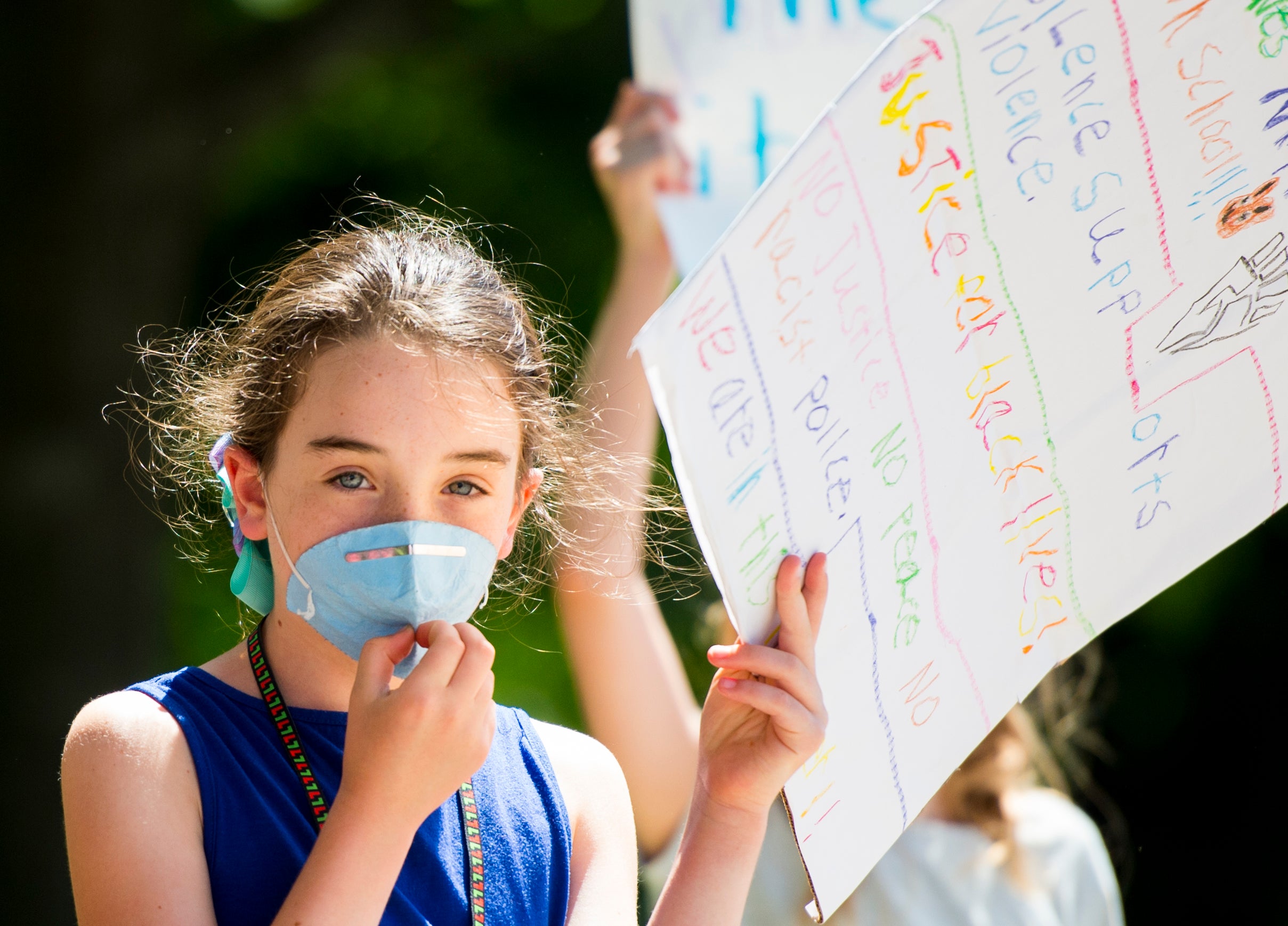 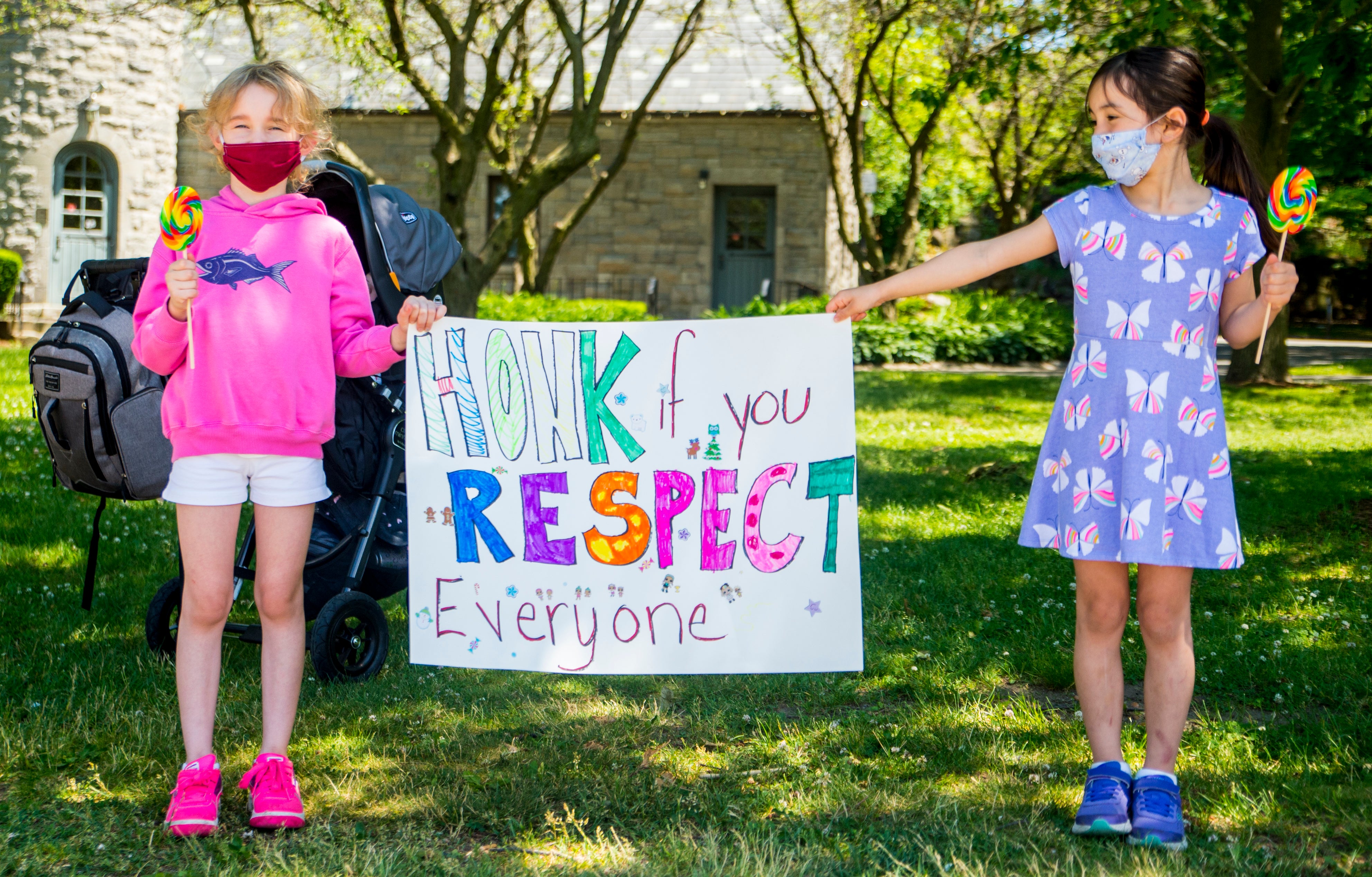 Quinn Williams (left) and Nora Rudy (right) stood with other children and their families in Powderhouse Park. 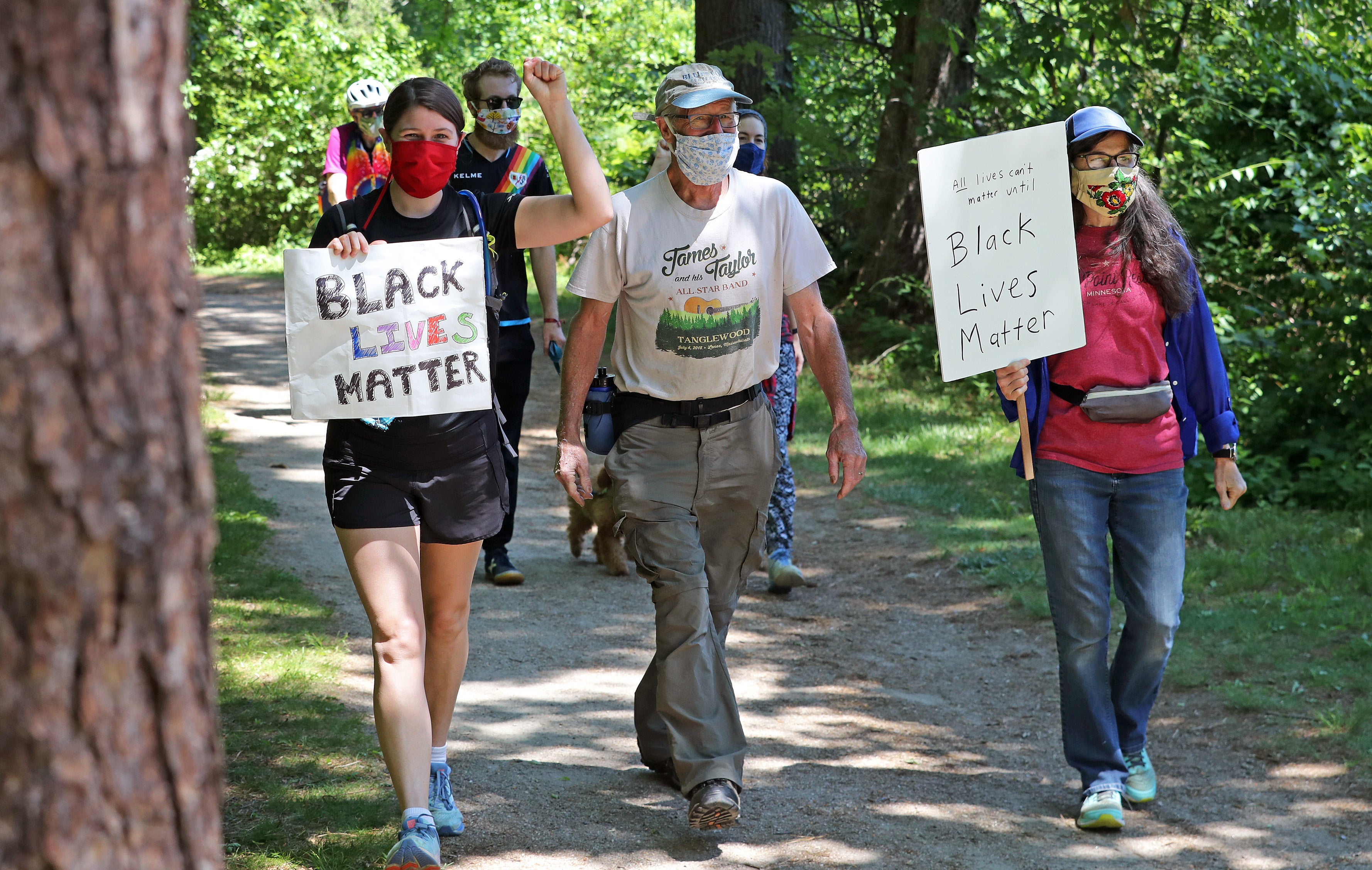 A small group of Black Lives Matter protesters met at Meriam’s Corner in Concord and walked to the Jacob Whittemore House in Lexington. 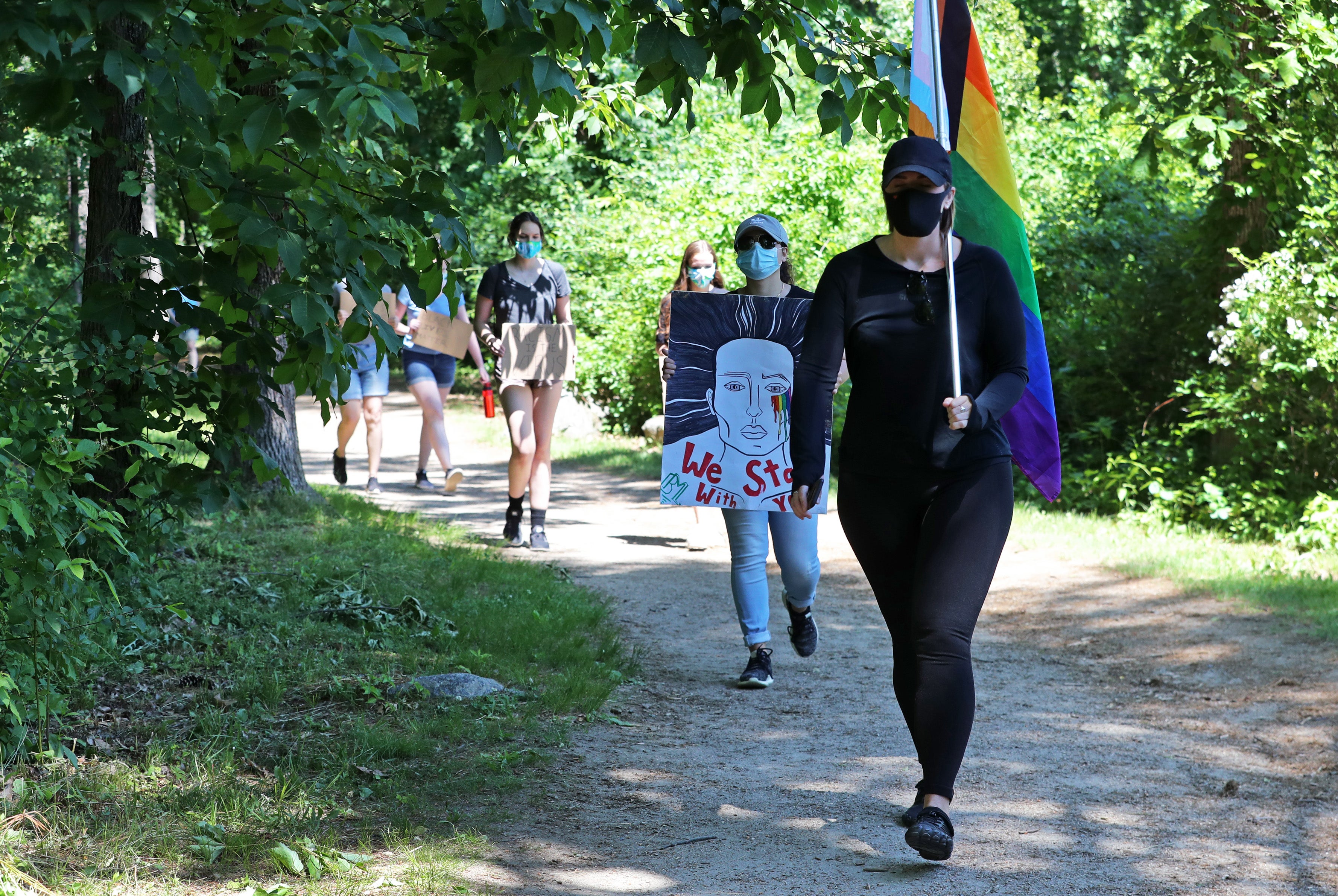 Protesters walked from Concord to Lexington.

Manchester By The Sea – A “peaceful gathering” – at Masconomo Park. A moment of silence for 8:46 while kneeling. pic.twitter.com/el2uvI5znG

Beautiful demonstration in my city of Framingham, Massachusetts to combat and bring awareness to racial injustice. Our mayor is the person right in front of us. A black woman in power is something beautiful and inspiring to see pic.twitter.com/nF5SBgsCE8

The calls for change from every corner of our state and our country cannot and will not be ignored.

To all of those who made your voices heard this afternoon in #Westford: Thank you and I’m with you. Together, we can make our nation more just and equal for all Americans. pic.twitter.com/7Jclt3RUwB

Went to the BLM Vigil & Rally at Wollaston Beach this afternoon with @Pherric and @Little_Fenn. Hard to see the scale in this video since I was at the low elevation but I’m so happy to see people still speaking up and hosting events! Keep fighting folks! #BlackLivesMatter #Quincy pic.twitter.com/oFTtV1uEaf 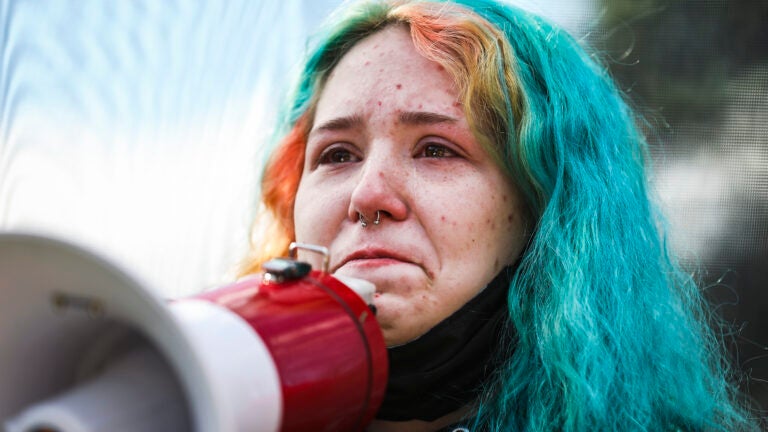 Photos: Protesters across Mass. took to the streets this weekend to protest police brutality, transgender discrimination