OFF THE COAST OF MAINE — As he pulled alongside one of his lobster pots, marked by a red and yellow buoy on Penobscot Bay, Mike Hutchings extracted and measured several of the crustaceans that would contribute to his 130-pound catch that day. It was a decent haul but his assessment of the fishing season was grim: “The worst it’s ever been.”

Hutchings’ catch on the final Saturday in June came as the lobster trade approached its money-making time. With the Fourth of July holiday around the corner, Hutchings and his fellow lobstermen were supposed to be gearing up for a major payday as out-of-staters, cruise ships, warmer weather and bounties of lobsters, having just molted their shells and been lured into the thousands of traps anchored on the rocky bottom of Maine’s coastal waters, came together in a seasonal windfall.

But like many businesses across the country, the Maine lobster industry, which makes up the bulk of the fishing revenue the state brings in every year, is being battered by the coronavirus, which has crushed the tourism trade that Hutchings and his fellow fishermen rely on for a living.

With fewer tourists expected to descend in search of lobster rolls, the immediate problem for Hutchings is simple: too many lobsters and not enough people to eat them. That has sent the price of lobsters plunging.

The pain is particularly unwelcome for an industry that has spent the past several years caught in the middle of political fights, including President Donald Trump’s trade war with China, looming restrictions to protect an endangered whale species and bait quotas. And then there are the region’s warming waters, spurred by climate change, which have slowly shifted the areas conducive to lobster reproduction away from the coast.

The effect of the virus on the Maine lobster trade is the latest indication of how the disease is upending nearly all corners of business activity and inflicting economic pain poised to last longer than many had predicted. Last month, after groups of fishermen outlined their concerns for Trump at an event in Bangor, Maine, the president directed the Agriculture Department to provide federal assistance to lobster harvesters.

But that assistance, which has yet to be detailed or allocated, may come too late.

More than 30 million people typically visit Maine each year. The majority come in the summer for the pleasant air of coastal New England, as well as for the lobster, a high-priced specialty that is a staple of tourist meals.

But the normal influx of visitors has been derailed by the virus, which is surging in some parts of the country, contributing to the general unease many Americans share when it comes to traveling. Further compounding the situation are the quarantine restrictions that Gov. Janet Mills, a Democrat, put in place for out-of-state travelers. (Maine has had about 3,300 virus cases, one of the lowest numbers in the country, according to data compiled by The New York Times.) 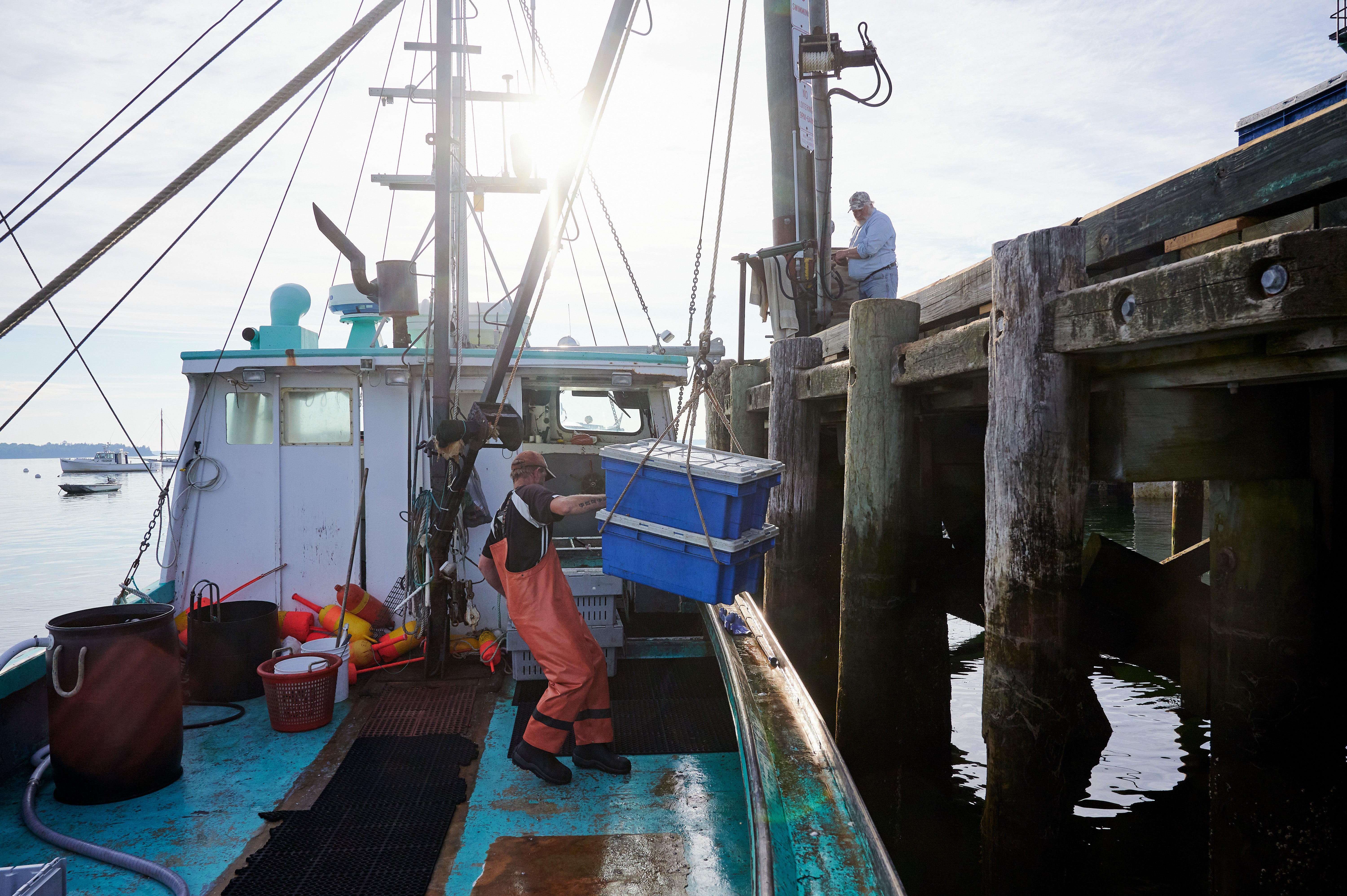 Hutchings and Eddie Hustus preparing their boat for a day at sea. The Maine lobster industry is a key part of the state’s yearly multimillion dollar fishing revenue.

Unlike previous years, this summer will bring no cruise ships and few “no vacancy” signs. The typical rainbow of out-of-state license plates idling in bumper-to-bumper traffic on the bridge to Wiscasset is unlikely to materialize.

For Hutchings, 66, whose hands are worn from both line and lobster after fishing Maine waters for more than 50 years, the effect of the pandemic boils down to whether he can make enough money to keep his boat profitable.

His expenses include bait, fuel and his crew’s wages. And as the cost of a pound of lobster steadily drops, he has been weighing almost daily whether to leave his harbor in Lincolnville for good.

“If the price gets so low, I won’t go,” Hutchings said, standing as his stern man, Eddie Hustus, quickly moved herring and pogies into mesh bait bags below his boat. “I’m not going to do it for nothing.”

In the waning days of June, Hutchings said he was selling the more costly hard-shell lobsters at around $4.50 a pound, roughly half of what he was able to get for them a year ago. In Lincolnville Harbor, only three of eight boats in the cove had lobster traps in the water, Hutchings explained. The captains of the others were patiently waiting to see how prices shift.

The economic hit to lobstermen seemed a far cry from Trump’s declaration on social media just a few days earlier.

“Pres. Obama destroyed the lobster and fishing industry in Maine. Now it’s back, bigger and better than anyone ever thought possible,” the president said on Twitter. “Enjoy your ‘lobstering’ and fishing! Make lots of money!”

Maine’s lobster industry hit its peak in 2016, the last year of President Barack Obama’s second term, with 132 million pounds caught at a value of $540 million, according to state data. Maine’s fishermen sold less than $500 million during each of the first three years of the Trump administration, on par with Obama’s first term. In 2019, a particularly bad haul pushed the price per pound of lobster to $4.82, the highest since Maine began recording the data in 1880.

After his meeting in Bangor last month, Trump issued a proclamation directing the agriculture secretary to find ways to assist the lobster industry, which he said had been unfairly targeted with retaliatory tariffs by China. 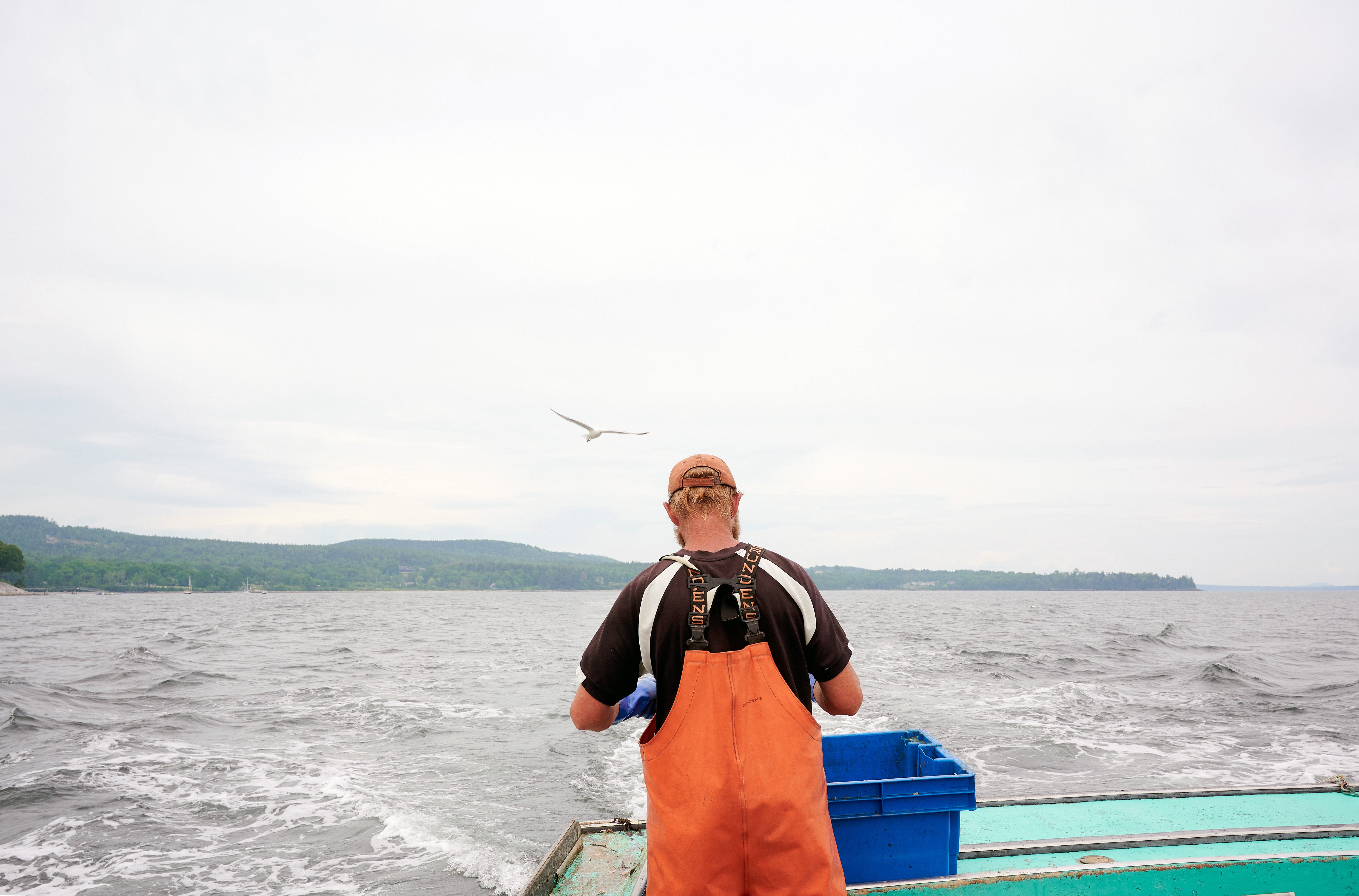 The usual influx of summer tourists in Maine has been derailed by the coronavirus pandemic.

“From 2015 to 2018, American lobster was the most valuable single seafood species harvested in the United States, with Maine accounting for approximately 80% of that value each year,” Trump said in the proclamation, adding that his administration would “mitigate the effects of unfair retaliatory trade practices on this important industry.”

Hutchings, who supports Trump, called the Bangor event “a photo op” but said he appreciated the president’s decision to sit down in Maine with the fishing industry, which he believed to be a presidential first, at least in his lifetime.

“Whether something good comes out of it, who knows,” Hutchings said.

Trump’s move to help Maine fishermen is aimed at strengthening his blue-collar bona fides during an election year. Yet for those affected, no number of presidential roundtables adorned with lobster traps is likely to change what could be a terrible summer for Maine’s fisheries.

“I think there’s obviously a lot of uncertainty for local businesses and a lot of concern for fishermen and for everyone else who relies on tourist business,” said Marianne LaCroix, the executive director of the Maine Lobster Marketing Collaborative.

Raymond Young, 55, a third-generation lobsterman who grew up putting wood plugs in the claws of crustaceans and owns Young’s Lobster Pound, a Belfast, Maine, staple, has spent the past several years trying to adjust his business as Trump’s trade policies changed the market.

Canadian resellers have stepped in, buying shellfish from Maine wholesalers, albeit at a lower price, before sending it to international markets such as China and Europe. Trump has criticized Europe for charging a higher tariff on American lobsters than those from Canada, but that difference stems from a trade agreement the European Union and Canada signed in 2016, which lowered European tariffs on Canadian products.

Young’s excess lobsters often go to the Canadian freezer plants at the end of the season, but this year, with low sales and the coronavirus, his buyer’s plants are already full, he said.

“Last month we were trading an old dollar for a new one,” Young said, noting that he did not expect to receive federal aid anytime soon. “If the tourists aren’t here and we can’t ship the other product to Canada because they’re full, it’s going to be a different year as we try and find a home for some of this stuff.” 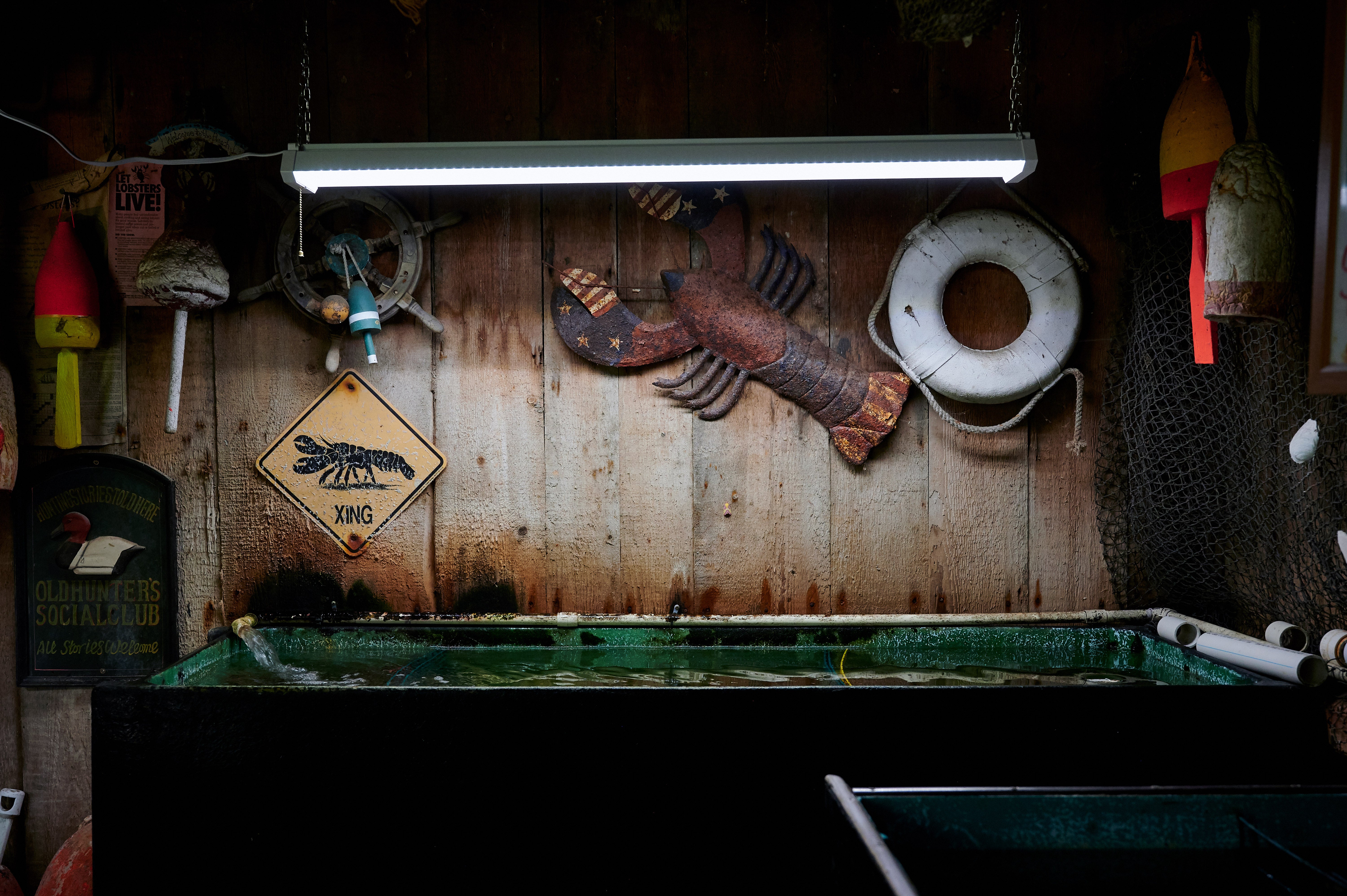 The shop where Hutchings sells lobsters directly to customers. Hutchings estimated he was getting roughly half as much per pound for the more costly hard shell lobsters than he was at this time last year.

A good season for Young means roughly 20 boats from a constellation of nearby towns like Searsport, Stockton Springs and Northport are selling their catch to him. So far this year, he has just two boats, leaving a glimmer of hope that fewer vessels on the water will translate to a smaller lobster yield and higher prices.

Hutchings’ 40-foot, Canadian-built, diesel-powered lobster boat, Fundy Spray, is one of those two boats. And on Saturday, Hutchings said he had decided to put the entirety of his 800 traps in the water this season just in case those prices do turn.

Adjusting his camouflage ball cap adorned with “Young’s Lobster Pound” atop his mop of white hair, Hutchings maneuvered his boat back toward Lincolnville’s harbor.

The wind picked up and the sun was out. The deck was covered in seaweed. Several small crabs scurried among the ocean detritus along with the red rubber bands that did not quite make it onto a lobster’s claw. Over the rhythmic churn of his boat’s engine and the occasional chatter from the marine radio, Hutchings muttered what could easily have been a Maine mantra.

“If you’re a fisherman, you have to make it work,” Hutchings said. “It’s what you do.” 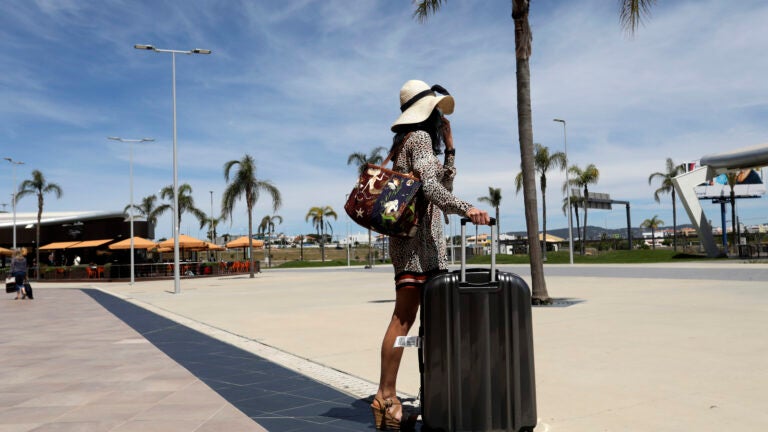