Gov. Charlie Baker said Thursday his administration is up for talking with those speaking out against historical symbols amid a push to remove and redesign the Massachusetts flag and seal, which critics have said perpetuates racism and is representative of oppression of indigenous people.

“There’s a conversation that’s going on you know in states and municipalities and, in some cases, at the national level about many symbols and historical emblems,” the governor told reporters during a press conference. “And if people here in Massachusetts want to pursue discussions with respect to some of those, we’d be open to talking to them about it.

“Obviously it’s the sort of thing that would have to be done in conjunction with our colleagues in the Legislature as well, but we’d be open to those conversations,” he added.

While he did not specifically refer to the state’s seal and motto, the Swampscott Republican’s remarks came in response to a question asking for his reaction to Native American advocates and their supporters, who gathered at the State House Thursday morning to call on lawmakers to take action on three proposals, including changing the state flag.

One resolve seeks to create a special commission to study the commonwealth’s existing seal and motto and make recommendations for new or revised ones, while a bill would ban the use of Native American mascots, names, and logos at all public schools in the state.

The commonwealth’s seal, which appears on the Massachusetts flag, contains a depiction of Wampanoag Chief Ousamequin, also known as Massasoit, who stands in the center holding a bow.

Above him is an arm brandishing the sword of Myles Standish, a Mayflower passenger who served as the Plymouth Colony’s first commander and led attacks against local tribes.

Below him is the state’s motto, written in Latin — “Ense Petit Placidam, Sub Libertate Quietem” — often interpreted as, “By the sword we seek peace, but peace only under liberty.”

“We are offended, and we want you to change it,” Faries Gray, of the Massachusett Tribe, said of the seal, according to WHDH.

The Massachusett tribe is made up by the descendants “of the original people that the English Invaders first encountered in what is now the Commonwealth of Massachusetts,” according to the tribe’s website.

“It’s time to listen to the indigenous people,” Gray added.

Last year, a number of municipalities, including Cambridge, backed state lawmakers’ efforts to study and replace the seal and motto.

The resolve, filed in January 2019, was reported favorably by the Committee on State Administration and Regulatory Oversight in May before the proposal was sent to the Joint Committee on Rules for review.

As for mascots, the pending bill seeks to have the state Board of Elementary and Secondary Education come up with regulations that make certain no public school has an athletic team name, mascot, or logo that “denigrates any racial, ethnic, gender, or religious group.” The bill, initially tailored to teams with Native American imagery and names, was first filed early last year and later broadened in a new Senate draft.

“We must remove the seal of the state flag, and we must ban all native mascots,” Stephanie Salguero, a Billerica High School alum said, according to WHDH. “It’s a mockery of our strength and our bravery.”

Billerica’s sports teams play as the Indians. An online petition seeking the name’s removal launched last month and had garnered over 11,000 signatures as of Thursday afternoon.

The prospect of changing the name has been raised before, however, including in March, according to the Billerica Minuteman.

But the latest push comes amid nationwide reflections, conversations, and protests regarding systemic racism and the disproportionate impacts people of color face because of it following the death of George Floyd, the Black man killed in police custody in Minneapolis in May.

The dialogue has also sparked changes and fueled debate on racial representation, stereotypes, and oppression present in everything from monuments and statues to athletic mascots.

In Walpole last month, the School Committee voted unanimously to move away from the district’s team name, the “Rebels,” which generated controversy for decades due to its ties to the Confederate South.

The teams, at times in the district’s history, wore Confederate imagery on their uniforms and had the song “Dixie” to back them up, as performed by the school band.

And earlier this week, the Washington NFL franchise announced it is leaving behind its “Redskins” name and American Indian logo after 87 years.

“If the Redskins can change, so can the commonwealth,” said Kevin Peterson, founder of the New Democracy Coalition, a local grassroots organization which has for several years pushed for the renaming of Faneuil Hall, based off Peter Faneuil’s business in the slave trade. 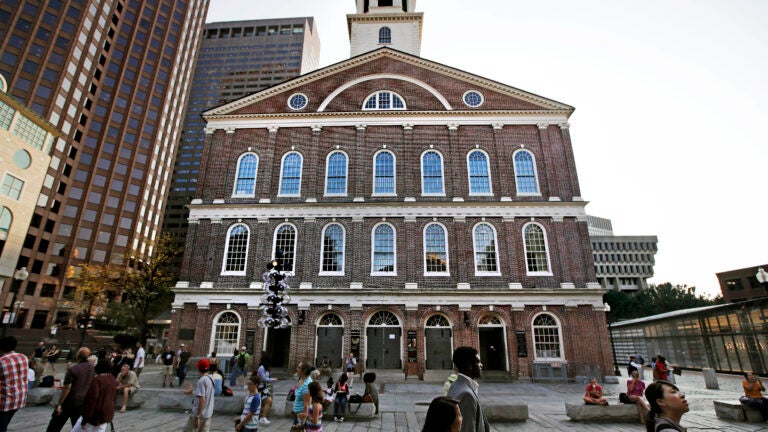 The push to rename Faneuil Hall: What to know about the debate