When going to the beach this summer, the primary concern for Massachusetts residents is likely the coronavirus pandemic, with new rules and regulations put in place to promote social distancing and keep beachgoers safe.

With so much focus on COVID-19, many may have missed the news on June 17, when researchers tagged the first great white sharks of the year in Cape Cod waters, and another shark was spotted in Cape Cod Bay.

In 2018, Massachusetts saw its first fatal shark attack since 1936, when 26-year-old Arthur Medici of Revere was killed at Wellfleet’s Newcomb Hollow Beach while boogie boarding. That same summer, another swimmer was severely injured after he was bitten by a great white while swimming at a Truro beach. As a result, the state brainstormed and implemented numerous new safety measures, including emergency 911 call boxes on remote beaches where cell service is less reliable and a Stop the Bleed program that was made mandatory for all of the lifeguards on Cape Cod’s public beaches.

But there will be fewer of those lifeguards on hand this season. Due to the coronavirus, the National Seashore only hired 40 percent of its seasonal employees this year, and only four of Cape Cod’s six public beaches will have lifeguards.

State Senator Julian Cyr, who represents Cape Cod, Nantucket, and Martha’s Vineyard and co-sponsored the bills that provided the safety measures in 2019, told Boston.com that beachgoers both local and visiting need to educate themselves in order to stay safe.

“We’ve been focused on making sure the beach experience is as safe as possible,” Cyr said. “Just like the expectations we have of beachgoers regarding COVID-19, this relies on beachgoers staying informed and obeying the rule.”

Here’s what to know about sharks when heading to Cape Cod this summer.

Are there more sharks on Cape Cod than before?

Researchers tagged more sharks in 2019 than ever before, and Skomal said that it was a “banner year” for great whites. However, exact numbers are tough to come by.

The Shark Conservancy finished a five-year study into the number of sharks in the area in 2018, but is still combing through more than 3,000 videos of sharks before releasing findings, according to the Cape Cod Times. But early numbers from a combination of sightings and tracking buoys suggest that the number is trending upward.

Those higher numbers can at least partly be attributed to the increased focus on sharks since the fatal 2018 attack, according to Skomal.

“There’s a greater level of effort out there looking for sharks, and that has resulted in more information and more communication and more closures of swimming waters,” Skomal told Boston.com in 2019. “And that’s what this perceived increase in sightings and beach closures can be attributed to.”

This summer, researchers will not be going out as regularly as they did in 2019, when they set out to tag sharks twice a week. Right now, researchers will head out on an ad-hoc basis, influenced in part by reported sightings.

Which part of Cape Cod is most likely to have sharks?

Researchers have spotted sharks in waters along every part of the Cape. But in the past, Skomal told Boston.com that great whites had been found in greater abundance in Outer Cape waters as well as Cape Cod Bay, north of Wellfleet. Buoys that track sharks previously tagged by Skomal and his fellow researchers saw almost 3,800 detections from 64 sharks from one buoy off Nauset Beach in 2019, as well as more than 14,000 pings from 53 sharks from a buoy off North Truro, according to the Cape Cod Times.

Buoys in Provincetown and Orleans recorded 31 and 17 great whites last year, respectively. Brian Carlstrom, superintendent of the Cape Cod National Seashore, told the Cape Cod Times that the results proved that sharks “are pretty well distributed all along Cape Cod.”

If you want the most recent sighting information, the Atlantic White Shark Conservancy’s Sharktivity app is an necessary resource. Since 2012, the app has provided a mix of shark sighting reports from researchers, safety officials, and beachgoers who can upload photos for expert confirmation. Users of the app will receive notifications about shark sightings in areas across Cape Cod.

When is ‘peak’ shark season?

According to Skomal, sharks begin showing up in Massachusetts waters and off the Cape starting in June, and are gone by mid-December, with a “peak” time for the marine creatures in the months of August, September, and October.

Ultimately, sharks will go where seals go, as the hunters’ presence in Cape waters is predicated on the presence of their main prey.

“Their movements are very dynamic,” Skomal previously told Boston.com. “They can cover the entire outer coastline of the Cape over a very short period of time, over just a couple of days.”

How can you tell great white sharks apart from other sharks?

Seeing a dorsal fin rise from the ocean has sent beachgoers into hysterics even before “Jaws” ever hit theaters. But there are many aquatic creatures who provide little to no danger to humans that can easily be mistaken for great whites.

Shark researcher John Chisholm told The Boston Globe that great whites have “large, triangular dorsal fins that come to a point at the peak with a straight rear edge,” which often has tears and notches.

Basking sharks, which are larger than great whites but only eat plankton, are the most common victims of mistaken identity. The key to differentiating the two is that basking shark dorsal fins are smooth and rounded compared with great whites. Dolphins and sunfish can also be mistaken for great whites, the latter of which was the subject of a classic 2015 viral video.

The Massachusetts Division of Marine Fisheries put out a video to combat misidentification of other marine wildlife for great whites, which you can watch below.

What should I do to stay safe in the ocean?

About a week after the first tagged shark of the season, the Cape Cod National Seashore issued a press release detailing recommended safety tips: Avoid seals and schools of fish, as sharks are primarily found near beaches when they’re looking for food. Experts also recommend only going into waist-deep water, as sharks typically won’t venture into water that’s more shallow than five feet.

Cyr mentioned other tips, as well, including to limit splashing, to avoid murky water, and to swim or surf in groups.

“Sharks usually attack seals when they’re alone,” Cyr said, of swimming in groups. “When there are shark attacks on humans, it’s a case of mistaken identity.”

Other suggestions include avoiding jewelry, which can resemble fish scales, and high-contrast clothing, as sharks can see contrast well.

“And of course, don’t enter the water if you’re bleeding,” Cyr said.

Despite the fatal attack in 2018, shark attacks are extremely rare, with an average of six deaths worldwide per year.

“There’s much more hype than there is risk,” Atlantic White Shark Conservancy chief executive Cynthia Wigren told The Boston Globe. “We think the best thing for public safety is education.” 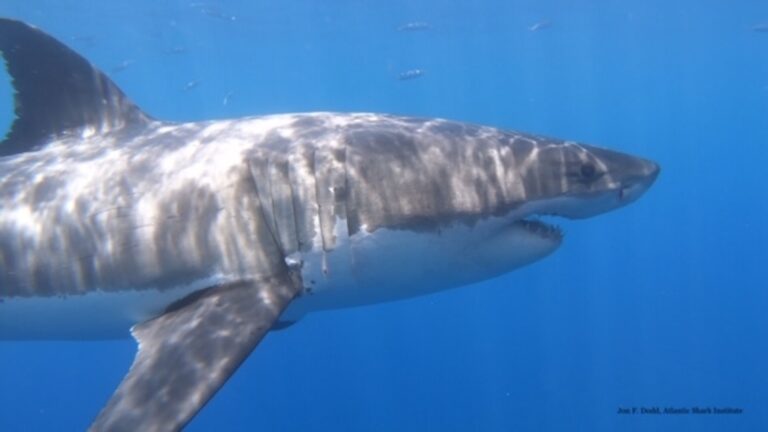