Members of Hingham’s firefighters’ union are at odds with department leadership after they vowed, despite the chief’s decision, not to remove the “thin blue line” American flags that fly atop their fire engines.

The flags went up in recognition of the anniversary of the line-of-duty death of Weymouth police Sgt. Michael Chesna, who was killed in July 2018, and were first purchased following Chesna’s death.

“Over the last few weeks, the ‘Thin-Blue-Line’ flags have taken a different political meaning, which might be offensive to some,” the chiefs’ letter reads. “We have always shared a great working relationship with the police department, and they don’t need a sticker, or flag, to realize that we have each other’s back during troubling times.”

But, in a statement Monday, Hingham Firefighters Local 2398 President Lt. Chris Melanson said if department leaders want to take down the flags, they’ll have to find non-union personnel to do it.

“At this time the Hingham Firefighters of Local 2398 respectfully request the town reconsider their decision to deem these flags as political statements,” Melanson said. “Otherwise, we regret to inform you that over the past 4 days no member of Local 2398 was able to sacrifice his or her moral fortitude in order to remove the flags from the apparatus.

“As we said before, our support for our brothers and sisters in blue is unwavering,” he added. “The flags have continued to fly with honor every day. They will have to be removed by someone other than a member of this union.”

The past few days have been very disappointing for the members of Local 2398. Our disappointment began with the decision…

Melanson’s remarks come four days after the union announced firefighters received word of the decision to take down the flags.

The union, in its initial post, stated that at “no time” were the flags meant to be a political statement, “nor was it an attempt to show support for, or against, any specific political party or advocacy group.”

FOR IMMEDIATE RELEASE:The Men and Women of Hingham Firefighters Local 2398 proudly support our brothers and sisters in…

Melanson said on Monday, however, that there were “several instances of material that could be viewed as ‘political’ in nature” that have been found throughout town before, including on government-owned property, but did not offer specific examples. The policy referenced by the chiefs should be enforced consistently and enforcement “should not be based on whether or not a resident finds it offensive,” he said.

“The past few days have been very disappointing for the members of Local 2398,” Melanson said. “Our disappointment began with the decision that the ‘Thin Blue Line’ flags should be removed from our apparatus. That feeling has continued over the past few days, as our repeated requests for a copy of the policy that we have allegedly violated, have been met with silence. The firefighters of Local 2398 display the highest level of professionalism and respect at all times, and it is disheartening to not have that reciprocated.”

The pushback against the decision to remove the flags has gained momentum from supporters outside Hingham, too.

In a lengthy Facebook post Sunday, Michael Chesna’s widow, Cindy Chesna, took aim at officials who she said supported her after her husband’s death, but have since backed pending police reform bills at the State House. She condemned the decision to remove the flags in Hingham.

“I take each of these actions as a personal attack on everything Mike stood for as a police officer and a decorated army veteran with two combat tours in Iraq and Afghanistan,” Chesna wrote. “My children are growing up in a world where police are vilified. Their father was not a villain, he was a hero who made the ultimate sacrifice. His memory should never be tarnished by anyone.”

The Hingham firefighters union also received support from the Boston Police Patrolmen’s Association, which thanked the group for challenging the chiefs’ decision.

“Tip of the hat to Hingham Fire Union for standing up to their chief, the police chief, and the triggered snowflakes,” the association posted on Twitter. “We are proud of our brothers and sisters who represent what Union Strong is all about. The TBL flag is flown to honor the sacrifices made by police. We salute you!”

Tip of the hat to Hingham Fire Union for standing up to their chief, the police chief, and the triggered snowflakes. We are proud of our brothers and sisters who represent what Union Strong is all about. The TBL flag is flown to honor the sacrifices made by police. We salute you! pic.twitter.com/m6MZC2a8cB

The firefighters’ union, in its post Monday, noted the “thin blue line” has been used for nearly a century to represent law enforcement officers in the United States “that hold the line between peace and chaos,” and especially those who were killed while serving.

The flag has emerged at recent rallies to support police held in response to Black Lives Matter demonstrations, which have been held around the country since the death of George Floyd, the Black man killed in police custody in Minneapolis in May.

“We stand by our initial statement that this has no political message for one reason, and one reason only, because honoring the sacrifices made by the men and women of law enforcement is not political. Period,” the firefighters’ union’s statement says. 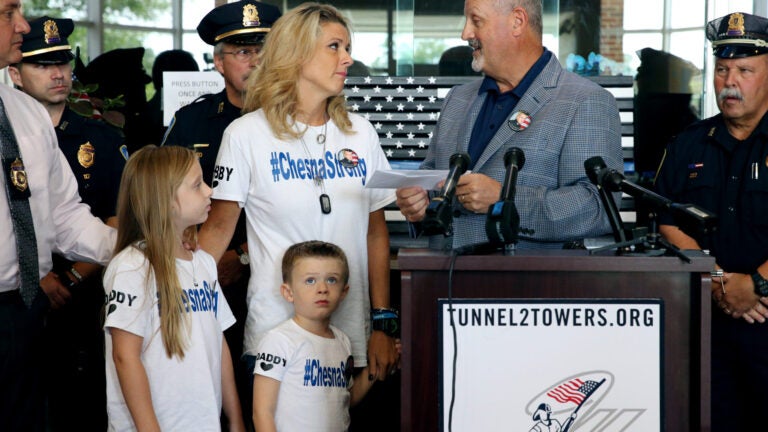