The U.S. Postal Service warned Massachusetts officials last month that ballots cast by mail for the November election could arrive late even if sent before the state-imposed deadline, raising the prospect of an untold number of votes going uncounted.

The letter is similar to others reportedly fanned out to state election officials in nearly four dozen states at the end of July by Thomas J. Marshall, the Postal Service’s general counsel and executive vice president.

As in other states — and detailed in a Washington Post story on Friday — Marshall told Secretary of State William F. Galvin’s office that the state’s deadlines are “incongruous” with mail service, and the “mismatch” creates a risk that absentee ballots requested near the state’s deadline “will not be returned by mail in time to be counted.”

The warnings come as a new postmaster general, a donor to President Trump, is slashing costs across the agency, and Trump himself has waged an extended assault on voting by mail, leveling repeated and unsubstantiated claims that it is rife for voter fraud.

Galvin, the state’s top elections official, said Friday that the Postal Service’s letter is, at best, “a bureaucratic action to cover themselves” should ballots arrive late.

“At worst, it’s an effort to create doubt and confusion” similar to Trump’s repeated attacks on voting by mail, the seven-term Democrat said. “Instead of helping, the Postal Service is adding to that.

“They’re well aware that voters need to use vote by mail and that the numbers [of absentee ballots] will be much higher. They knew that. Everyone knows that,” Galvin said. “There are going to be more people voting by mail in this election probably than any other presidential election in recent times. You may have to go back to World War II” to find more.

The two-page letter is similar to detailed warnings the Postal Service sent to 46 states and Washington D.C., saying that it can’t guarantee all ballots cast by mail could arrive in time, the Post reported Friday. A USPS spokeswoman told the newspaper that the letters are an effort to ask “election officials and voters to realistically consider how the mail works.”

A new law Governor Charlie Baker signed in July allowed every registered Massachusetts voter to cast an absentee ballot by mail amid the novel coronavirus pandemic. More than a dozen states have taken similar action to expand voting in the face of COVID-19, the Globe has reported.

The letter to Massachusetts, provided to the Globe on Friday by Galvin’s office, noted that voters can request a ballot as late as four business days before the Nov. 3 general election, and that a completed ballot must be postmarked by Election Day and received by local elections officials within three days after the election.

But the Postal Service said if voters wait to act close to the deadlines, they run the risk of being disenfranchised. It recommends instead that voters send in ballots at least one week before the deadline.

“There is a significant risk that, at least in certain circumstances, ballots may be requested in a manner that is consistent with your election rules and returned promptly, and yet not be returned in time to be counted,” Marshall wrote.

Galvin said he and local election officials have repeatedly urged voters, should they choose to vote by mail, to return their ballots as early as possible to avoid any issues.

With the Sept. 1 primary less than 2 1/2 weeks away, and voting by mail already underway, Galvin said he has concerns about that election, but is more worried about the November election, when there is expected to be far more people casting ballots.

Voting by mail has been the center of a partisan storm for months, driven predominantly by Trump’s repeated claims that it will invite fraud. On Thursday, he vowed to block emergency funding for the Postal Service in any coronavirus relief package, saying that without it, a largely mail-in voting election would not be possible.

Trump last month went as last month to suggest that the election should be delayed until people can “properly” vote, claiming November’s vote “will be the most INACCURATE & FRAUDULENT Election in history.”

Warren’s office said Friday the Postal Service Inspector General had agreed to launch a probe, including into “all recent staffing and policy changes.”

Galvin, a Brighton Democrat, said he’s been urging party officials, campaigns, and other advocates to consider filing lawsuits against the Trump administration, in an effort to draw out internal communications that could shed light on DeJoy’s moves, including whether they are politically driven.

“Instead of wasting a lot of time to try to persuade them politically or trying to get information out of them [in hearings], the better way is to go to court. That’s the only way they understand,” Galvin said. “The best way to get results is to litigate.”

Galvin declined to say Friday how many ballots had been requested, saying he expects to have a firm number by Tuesday, when he’s scheduled a news conference.

But there have been hiccups already. Galvin estimated that his office had “well over” 100,000 ballot applications bounce back to it because they went to voters who no longer live at their listed address — a result he said wasn’t unexpected and will help his office clean up its voter rolls.

“Some of it was conspiratorial. ‘Oh this is fraud,’” he said of complaints about multiple applications landing in some mailboxes, including for people who no longer lived at the address. “It’s not.”

In an ironic twist, Galvin said his Elections Division wasn’t immediately aware of the July 30 letter from the USPS because the Postal Service addressed it to the wrong location.

It was sent to the State House, even though Galvin’s elections office is located across the street in Ashburton Place. 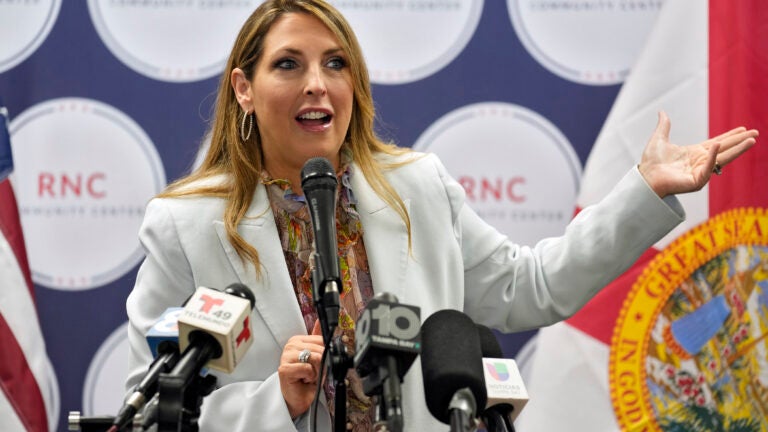