After a photo of mail collection boxes on a flatbed truck in Brighton quickly garnered significant attention on Twitter Friday, the U.S. Postal Service clarified the practice is regular procedure for replacing worn-down boxes.

USPS spokesman Steve Doherty told Boston.com boxes that are rusted, in need of paint, or tagged with graffiti are brought into the service’s shop for repair, and new ones are installed to replace them.

“These trucks are on the street daily,” Doherty said in an e-mailed statement Friday evening. “They’re part of our field maintenance fleet.”

But the picture circulating on social media fanned speculation as the USPS took center stage in the national news cycle this week.

On Thursday, President Donald Trump acknowledged he is withholding money to the USPS to make it more difficult for the postal service to handle an anticipated surge of mail-in ballots for the coming election.

Massachusetts is also one of 46 states the USPS wrote to late last month to warn that mail-in ballots for the presidential election may not be delivered in time to be counted, according to a Washington Post report published Friday.

Meanwhile, mail deliveries have been delayed across the nation due to cost-cutting measures that remove overtime for hundreds of thousands of workers and a directive that mail be held until the following day if distribution employees are running behind.

This is really happening. Wow. pic.twitter.com/kLqZb5Srii

But Doherty said the removal of the mailboxes in Brighton is not unusual, adding that the green relay boxes used by postal carriers are often relocated when delivery routes are added or adjusted so workers do not have “to carry as much mail at one time.”

“Also, we started an initiative back in October to replace every blue collection box in the state with our newer version that assists compliance with our aviation security program,” Doherty said. “These have a narrower slot that only accepts letter mail and forces anyone trying to mail a package over 13 ounces to take it to a Post Office and present it over the counter, as our policy requires.”

Furthermore, the USPS conducts density testing on occasion to figure out if a collection box is needed in a given area, according to Doherty.

“This is why you may see one box on a corner that previously may have had two or three side by side,” he said. “With declining letter volumes, we try to keep the system efficient.

“In short – this is all routine maintenance,” Doherty added. “There’s no effort underway to reduce collection boxes.”

Still, questions have abounded in Gloucester, where collection boxes were also recently removed.

Democratic Congressman Seth Moulton wrote in a Facebook post Friday that his office has received reports and photos documenting the removals. Moulton posted a photo depicting boxes on the back of a truck and said his office reached out to the USPS for an explanation.

“The Postmaster assured us that all but one of the removed boxes in Gloucester will be replaced with more secure boxes,” Moulton wrote. “I can understand everyone’s concern given the recent reporting about other cities and the president’s comments this week. I will continue monitoring this and fighting to protect the postal service and our elections.”

I have received reports and photos from some of you about mailboxes being removed in Gloucester. My office has spoken…

Moulton offered that “one of the fastest ways to protect the Post Office” is by having Congress pass the Heroes Act, the over $3 trillion coronavirus pandemic relief package passed by the House in May.

But negotiations over another stimulus package have stalled, and the Senate has adjourned through Labor Day without reaching a deal. 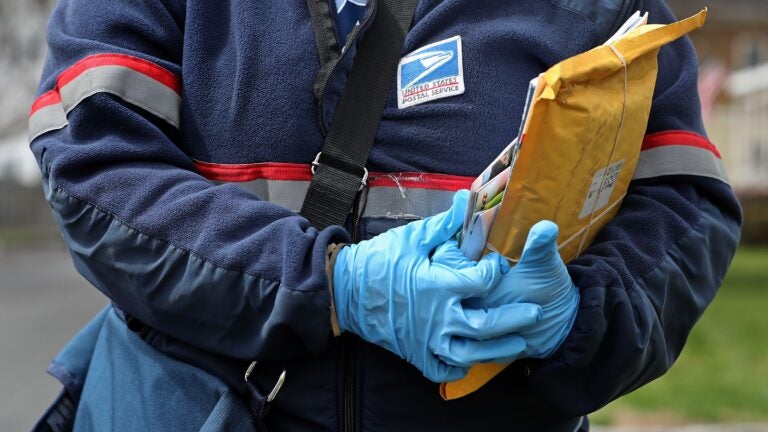 Mass. among states warned by Postal Service that mail-in ballots could go uncounted amid delays