After South Boston woke up to the phrase “Trump 2020” painted in bright yellow on the streets of Southie Saturday morning, residents took to the city’s 311 website and app, sharing their frustration and support.

One complaint read “This doesn’t represent all of South Boston, can we have this removed and people arrested for illegal graffiti and littering?”

While another resident called the graffiti  “Freedom of Speech.”

Look at this garbage in Southie. from boston

“Only in Southie. Makes me proud there are still some people who have guts. Unlike our spineless Southie politicians,” they wrote. “A BUNCH OF SELL OUTS. LETS SEE HOW LONG IT TAKES THE MAYOR TO REMOVE IT.”

Some people also posted to Twitter, many of them in support of the graffiti. Reddit, meanwhile, was less kind.

@realDonaldTrump (taken of a south Boston Ma community board) Mr. President a lot of us here in Boston support you!! #Trump2020 pic.twitter.com/qbsOalyLL9

The same day it was reported, the giant yellow letters promoting President Donald Trump’s campaign were painted over by the Department of Conservation and Recreation, which maintains the road, state police spokesman David Procopio told The Boston Globe.

Procopio told the newspaper that the graffiti had been located both at the intersection of I Street, and near the Admiral David Farragut statue on William J. Day Boulevard. He added that similar graffiti has been found on East Broadway.

“The decision to paint over the graffiti was based solely on the illegality of the act, not the content or message of the graffiti,” Procopio told the Globe in an e-mail Sunday.

Separately on Saturday, Trump supporters took to the water in Newburyport where dozens raised Trump 2020 flags during a boat rally in support of the president.

The demonstration was one of many to be organized around the country, from New Jersey to Florida, in the past several weeks as the election nears. 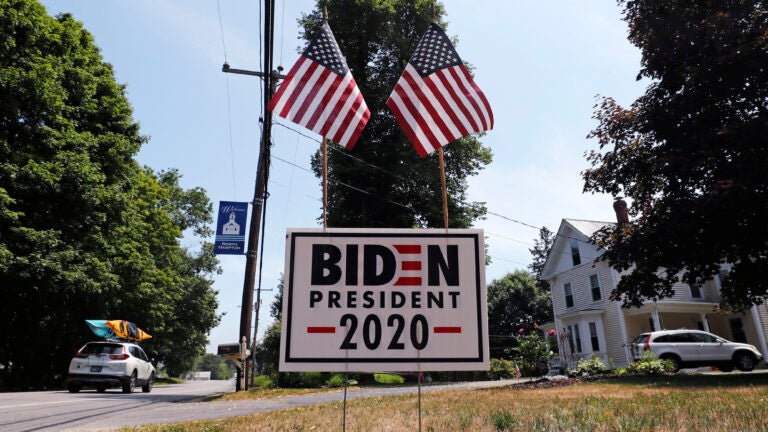