On some days, the smell of sulfur lingers in the air at the 98-year-old Higginson Inclusion School in Roxbury. Rodents scurry around the floors, and the tall, heavy windows in special-education aide Allie Bledsoe’s classroom only stay open with blocks propped under them — if she can get them open in the first place.

The Higginson’s problems, as well as those at dozens of other Boston schools with inadequate ventilation and broken windows, have been well-known for years, but city and school officials have been slow to respond. Now, that neglect has become a major hurdle in reopening schools amid a pandemic in which airborne spread of the novel coronavirus is a major concern.

A range of city data suggests that getting buildings ready to welcome students will be a big job. A city-commissioned report two years ago found air quality and ventilation to be poor or deficient in more than half of Boston’s 125 schools, including the Higginson. In fact, only 35 schools have building-wide ventilation systems — many nearly a half-century old — while 90 schools have limited or no mechanical ventilation, making often rickety windows the best option to bring in fresh air.

“Are these buildings really going to be safe when we are asked to go back?” Bledsoe asked. “Kids in poor neighborhoods have been going to school in buildings that have been totally inadequate for decades and they have been allowing it to happen.”

Across Massachusetts, the coronavirus pandemic has shined a spotlight on school air quality. Usually debates over the purity of school air percolate in isolation, such as when teachers or parents at specific schools levy complaints regarding mold, stuffy air, or high incidences of asthma, headaches, or scratchy throats.

But with new research emerging that coronavirus particles can linger in poorly ventilated areas and an MGH study indicating that young children carry high virus loads in their upper respiratory tracts, school air quality has suddenly emerged as a statewide crisis, and a politically volatile one.

The Massachusetts Teachers Association, the American Federation of Teachers Massachusetts, and the Boston Teachers Union have all instructed their members not to enter school buildings this fall until local and state officials can prove they are safe, resulting in showdowns between administrators and teachers in a handful of districts, such as Sharon and Andover. The hard-line stance is angering a growing number of parents who want their children to return to school.

Yet addressing air quality is turning into a complicated issue for many superintendents and school committees, and a wide range of districts, including Somerville, Springfield, and Worcester are delaying the reopening of classrooms this fall as they assess ventilation systems, upgrade filters, and make repairs.

Boston Superintendent Brenda Cassellius said the concerns that teachers have been raising about poor ventilation in schools — prompting last-minute work this month to repair or replace more than 7,000 windows — were one of many challenges that forced the district to delay bringing students inside buildings this fall.

“We believe that with the work that we’ve done this summer,” she said, “it is safe to open and begin welcoming our prioritized students October 1st.”

School leaders are quickly learning there are no one-size-fits-all strategies to improving air flow. Every school system, regardless of wealth, has buildings of varying age and ventilation systems. Massachusetts has a fairly old stock of schools. About two thirds of the state’s approximately 1,600 buildings were constructed more than 50 years ago, including one out of five built before World War II.

Many urban districts have a disproportionate share of extremely old buildings. Two-thirds of Boston’s 125 schools were built before Germany invaded Poland in 1939, and about half of the school buildings in Worcester and Lynn went up before that global event, according to state data.

”These old buildings are breeding grounds for germs,” said Barbara MacDonald, a teacher at Lynn’s Tracy Elementary School, built in 1898. “Students are sneezing all the time in the first grade and constantly getting Kleenex. … It’s nerve-racking.”

Her colleague, Jeanne McMenimen, said she sometimes has to stand on the window sill and get a couple of students to help her open a window.

“Our building is not healthy on a good day; never mind when a virus is around,” McMenimen said.

Lynn, which is grappling with one of the highest rates of COVID cases in the state, is beginning the new academic year remotely. Lynn officials could not be reached for comment.

That so many school districts were unable to address ventilation issues over the summer — compelling them to keep classrooms closed — has disappointed a number of physicians, building experts, and parents, especially given that COVID-19 positivity rates are below 1 percent in most communities.

Joseph Allen, director of the Healthy Buildings Program at Harvard T.H. Chan School of Public Health, said school systems should have been working on improving ventilation systems and fixing windows since they sent students home in March.

“I find it really surprising that we have not made getting kids back to school an urgent priority,” said Allen, whose program issued a 62-page report in June on improving school building safety that included such recommendations as equipping classrooms with air purifiers, upgrading filters for ventilation systems, and cleaning the air with ultraviolet germicidal irradiation. “Just because a building is old doesn’t mean there are not steps we can take to keep students and teachers safe.”

For instance, Allen noted that a study that he and his colleagues conducted this summer found that opening classroom windows only six inches could achieve five air exchanges per hour, a standard that schools should strive for in the pandemic but one for which most usually fall woefully short. That strategy should be part of broader efforts to reduce potential COVID-19 spread, he said.

But he added even the most comprehensive plans are not foolproof: “There is no such thing as zero risk in anything we do, especially in a pandemic.”

Several school district officials defended the pace of improvements, saying they began some efforts in the spring, but were hamstrung because the Massachusetts Department of Elementary and Secondary Education didn’t issue official guidelines until July 22.

“We monitored early research and warnings on growing evidence that aerosol transmission impacted by ventilation was a significant transmission source and began ventilation efforts as soon as experts began to coalesce around this need,” said Susana Hernandez Morgan, a spokeswoman for the Somerville schools, which has hired an outside firm to assist with its efforts.

In combating the coronavirus, industry experts say schools constructed in the last five years or so likely require only slight modifications to their ventilation systems, such as upgrading air filters and reprogramming systems to bring in more outside air and exhaust more used air.

Newer systems and even some older ones connected to a centralized school-district operation system can generate reams of data that give operators real time information on air quality, enabling them to quickly respond to virus flare-ups.

“We can immediately flush the air out and not have it circulate in the hallways and other classrooms,” said Peter Fehl, president of building management systems at Honeywell Building Technologies, which works with a number of Massachusetts schools on ventilation.

In schools with older HVAC systems, the ability to control the environment is more challenging and may need to be augmented with ultraviolet lights or ionization systems, Fehl said.

“People want a silver-bullet COVID package, but every school is different,” he said.

Some districts have developed ambitious air-quality improvements that they expect will yield benefits well beyond the pandemic.

Worcester, which is kicking off the school year with remote learning, has launched a $15 million project to improve air quality in its schools, part of a broader city effort to upgrade ventilation in municipal buildings. By the end of this calendar year, Worcester aims to outfit its 45 schools with 2,400 needlepoint bipolar ionization units, which hospitals use, by either installing them in the HVAC systems or bringing in portable devices.

Boston is pushing ahead with a more modest plan: ensuring at least one window in each classroom can open. The $7.6 million endeavor largely began this month and involves repairing or replacing more than 7,000 windows. The school system is also purchasing 6,000 fans.

Relying on windows could test the patience of students and teachers. As the weather gets colder, school officials plan to keep windows open and crank the heat, as recommended by state guidelines.

“We are stress-testing our heating system to make sure they can keep up with the demand,” said Pat Brophy, the city’s chief of operations. “We fully expect energy costs to rise dramatically.”

Those repairs were done as part of Walsh’s 10-year effort to overhaul aging schools, which has experienced repeated delays. A big milestone in that $1 billion effort was releasing a city-commissioned report in 2017 that found more than half of the schools were plagued by poor and deficient air.

But city officials distanced themselves from the findings after public controvery ensued, arguing it reflected observational testing of classroom air based on whether it “felt too warm, too cold, or stagnant.” Officials added that the city’s annual air sampling hadn’t uncovered major concerns. The pronouncement did little to alleviate concerns.

“It’s unfortunate it took a pandemic to fix things that should have been fixed decades ago,” said Jessica Tang, president of the Boston Teachers Union, who says the city’s efforts this summer didn’t go nearly far enough.

Matthew Ruggiero, who teaches in a windowless classroom at Charlestown High School, is preparing to welcome immigrant students there in early October. He said he’s been told his classroom is safe because the school has a good HVAC, but he’s skeptical.

“The general feel of the classroom is pretty stuffy,” Ruggiero said.

Bianca Vázquez Toness, of the Globe staff, contributed to this report. 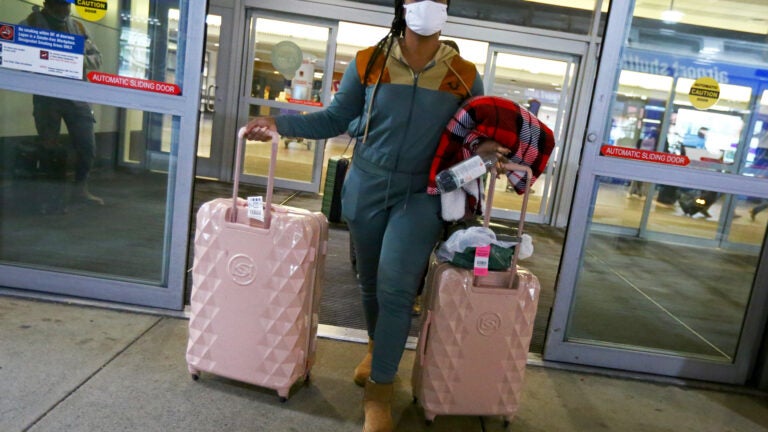