WINHALL, Vt. — From his post at the town dump, Scott Bushee spent the summer observing his new neighbors, transplants who pulled into his compound with heads full of rustic fantasy and license plates from New York and New Jersey.

Bushee is one of the half-dozen or so people who run the town of Winhall, Vermont, with a year-round population, before COVID-19, of 769. He is a cranky dude. That is his brand.

At the entrance to his compound, above the sign that warns his fellow residents that they cannot enter after 3:50 NO EXCEPTION, he has affixed a demented-looking baby doll, blank-eyed and with one hand replaced by a plastic fork.

Despite this clear warning, this summer’s population explosion has tried his last nerve, as he explained to one flatlander after another how things are done in Vermont. Yes, the dump attendant, a heavily bearded man named Jody, carries a firearm. And no, you cannot mix your magazines with your cans and bottles.

“Now you’ve got to deal with Vermonters,” he said. “They will tell you straight-up. I try to do it as politely as I can, but if you push the envelope, things are going to go sideways. I’m sure that they’re looking at Jody and I and saying, ‘Oh, my God, I’ve landed in Russia.’”

It has been this way since spring, when Vermont began to emerge as a model of virus control. As city dwellers scrambled to settle their families far away from hot spots, the state’s regular summer influx swelled by approximately 10,000, estimated Jeffrey Carr, an economist who advises Gov. Phil Scott.

State planners are crossing their fingers that many of them, now free to work remotely, will put down roots. The last time that happened in a big way was during the back-to-the-land movement in the 1960s and ’70s, when the state’s population grew by 35,000, among them such icons as Bernie Sanders and Ben and Jerry’s.

For years, Vermont’s population has been stuck around 620,000, a plateau so threatening to the labor force and tax base that in 2018 the state began offering a cash incentive of up to $10,000 for remote workers who moved to Vermont.

In towns like Winhall, that is really not the problem anymore.

Instead, officials are hard-pressed to keep up with the burst of growth.

Elizabeth Grant, the town clerk, reckons that over the summer the town’s population topped 10,000. When school reopened this month, the number of enrolled students had increased by 54, a jump of more than 25%, so the costs to taxpayers will exceed projections by $500,000.

The post office ran out of available P.O. boxes in mid-June. Electricians and plumbers are booked until Christmas. Complaints about bears have quadrupled. And as far as the dump is concerned, as Bushee put it, “the closest word I can tell you is sheer pandemonium.” 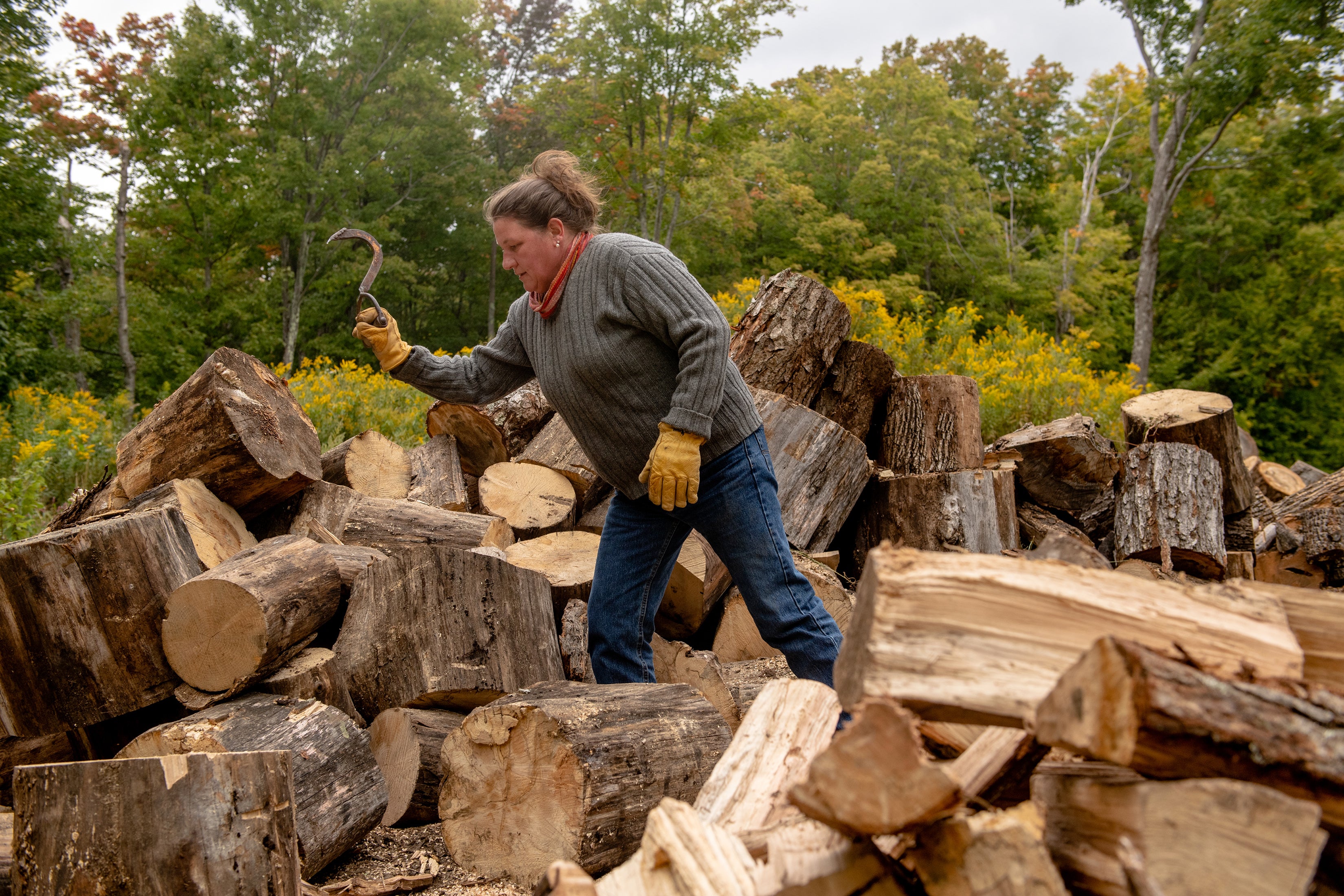 Elizabeth Grant, Winhall’s town clerk, processed more than 100 home sales throughout the summer. “We’re all starting to feel pretty exhausted,” she said. “We just were not made to maintain this level of action.”

“It’s hard to know who is living in what house,” said Grant, 50, who is also Winhall’s treasurer, registrar of deeds, tax collector and presiding officer of elections. (She is also the ex-wife of Bushee. It is an amicable divorce; recently, when a wasp became lodged in his ear canal, she rushed over to his house with tweezers.)

That is part of how Winhall operates, though. Everyone knows one another. When taxes are due, Grant personally calls everyone who has not paid, just in case they forgot. These days, though, she looks around the dump or the post office and finds herself utterly bewildered.

Realtors in town knew something was up in late April, when Scott began cautiously reopening businesses.

Since then, the number of available single-family homes in Winhall and Stratton, the adjacent ski resort, has dropped to 29 from 129, its lowest level since 2003, according to Tim Apps, a Realtor with the Vermont Sales Group.

Anna White, 36, began looking for places in July when it became clear that schools in Bethesda, Maryland, where she now lives, would not reopen for in-person learning. The market she encountered was “a gold rush.”

“We would make an appointment to look at 10 houses on a Saturday, and they would be gone by 9 a.m.,” said White, who grew up in Vermont and left the state to go to college.

The pickings were so thin that at one point, to her husband’s dismay, she put in an offer on a battered-looking house whose older occupant was hoping to remain there.

“I was like, ‘We can make it work. We can move into an apartment in the back,’” White said. “My husband — it was like a cartoon — he was shaking me.” 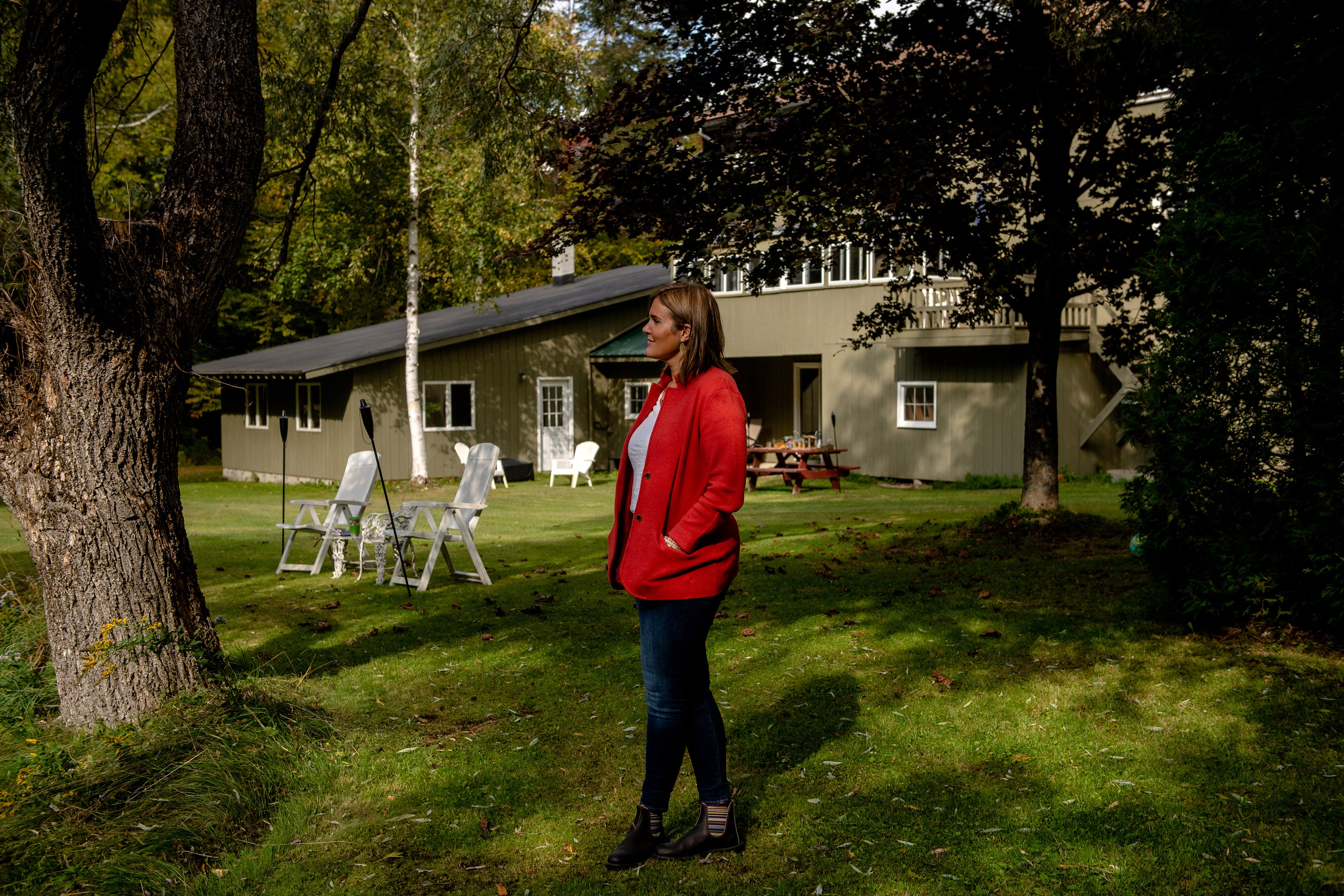 Anna White, 36, who grew up in Vermont and left the state for college, began looking to move back in July.

Now that the family is settled in another home, she is glad she made the effort. At the Mountain School, the private school where her children started this month, there are 39 new students in a student body of 83, nearly all from what Colleen Palmer, the head of school, calls “COVID families.” They have brought with them, she said, “a real influx of terrific energy, enthusiasm, vitality, diversity.”

The Stratton Mountain School, a nearby prep school specializing in snow sports, began the year with 57 new students. Carson Thurber, the head of school, was equally effusive.

As for White, she has found herself wondering how all these remote workers — many in tech or finance — will change the social fabric. The other night, at the Red Fox Inn, a bar in Winhall, she approached a couple she had seen around town, asking them, simply, “COVID refugees?” The answer was yes.

“She was Australian. He was from Brooklyn,” she said. “He was into cryptocurrencies. He was starting this company that was going public on the Norwegian stock market this week. I don’t remember people like that when I was in high school.”

For the newcomers — and for the state — the question is whether they will stay, since many companies only allowed remote working on a temporary basis.

State officials will have a better sense of how many people have moved into the state in a few weeks, after gathering figures on school enrollment, which has been steadily declining in Vermont for a decade. They expect an increase of 2% to 5% statewide and as much as 15% in some towns, said Michael Pieciak, commissioner at the state Department of Financial Regulation.

Jonny Hawton, 33, a British-born brand strategist with Vice Media’s creative agency, sold an open-plan, midcentury modern house in Topanga Canyon, outside of Los Angeles, and bought a fixer-upper near the Vermont town where his wife grew up.

He finds it hard to conceive of returning to his old commuter lifestyle, which allowed him only an hour a day with his 1-year-old daughter.

“If someone told me I had to go back to do that tomorrow, I don’t know what I would do,” he said. “It’s almost like we were in a trance that everyone went along with. I used to see Millie for an hour a day. This whole crisis has kind of hit the reset button for a lot of people, made them question the things they sacrificed for work.”

As temperatures dropped last week, White was awaiting the delivery of a Peloton bike and watching with amusement as her husband, who is from Maryland, began to wear flannel.

“It’s like a social experiment,” she said. “We moved to Vermont at the best time of year. The bugs have frozen. The leaves are changing. But are we going to feel this way in March?”

That same question interests the longtime residents of Winhall.

“I got a feeling that they’re going to find there isn’t as much to do here,” said Stuart Coleman, 64, a selectman and the proprietor of the town’s gun shop.

Coleman’s family used to run an auto repair shop, so he has had occasion to get to know people from states to the south, often after their vehicle had slid off the road. They will get along fine here, he said, as long as they do not get pushy.

“I would have people, they think if they holler at you, you work quicker,” he said. “They don’t realize you might slow down — because that’s what you do downcountry.” 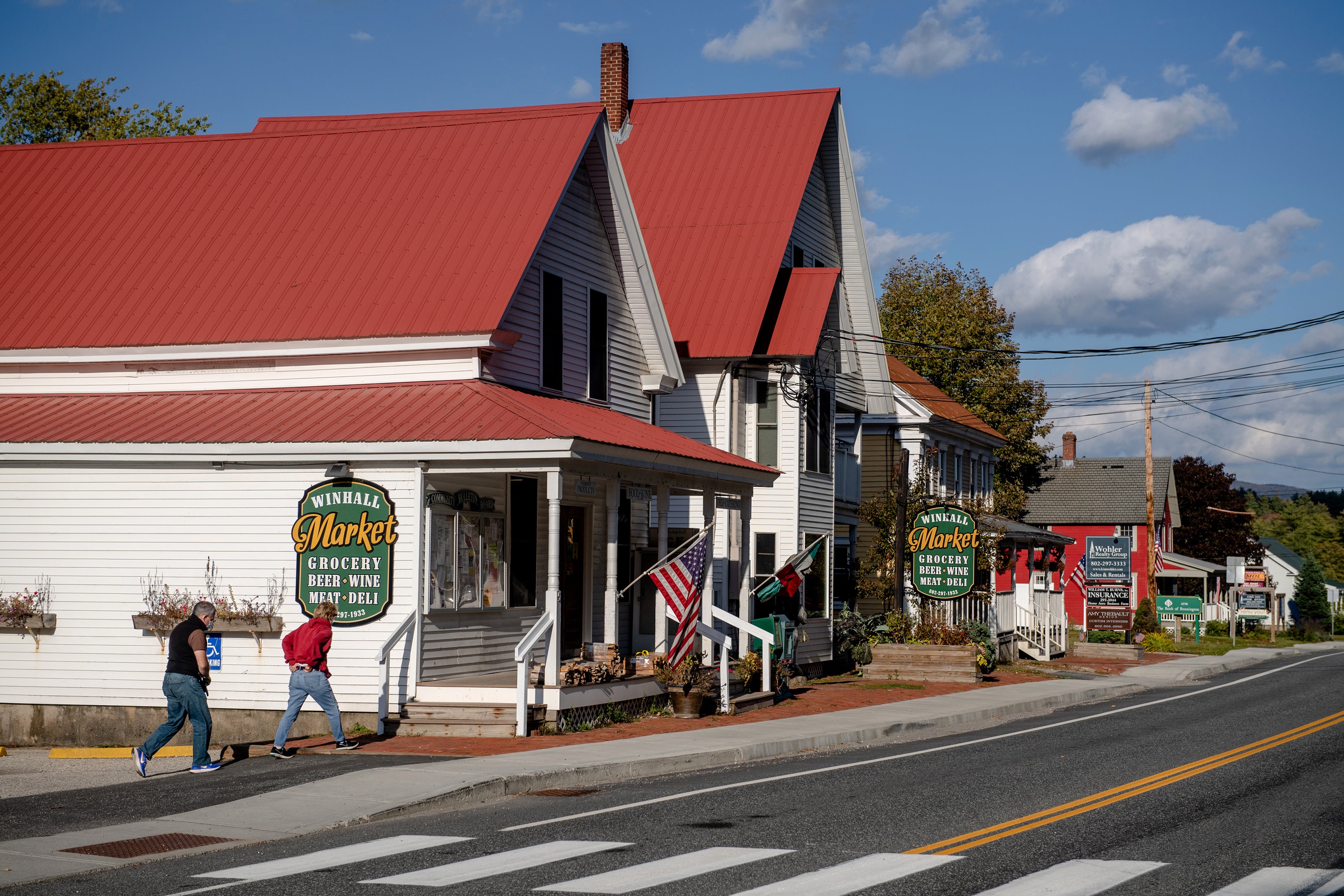 The number of available single-family homes in Winhall and Stratton, the nearby ski resort, has dropped to 29 from 129, with many properties purchased sight unseen.

Kyle Isherwood, the town’s game warden, is hoping that by next year, the transplants will have completed a learning curve regarding trash disposal.

He spent much of the summer responding to bear complaints. There were 27, more than quadruple the number from all of 2019. In one case, a bear had climbed all the way into a vehicle, drawn by the smell of junk food, and used her claws to shred its interior.

Mostly the callers are rattled by bears. Sometimes they want to know if they can shoot them. (If they’re in your house, yes; if they’re in the yard, no.) “I get it. I’m from Connecticut,” he said. “It’s a different world up here.”

And it would be wise for the new arrivals to ingratiate themselves at the dump, where, one day this summer, Bushee forced a newcomer — he was from New Jersey — to pick up each and every wrongly sorted magazine from the ground.

They never had a problem with him again. Bushee, a sixth-generation Vermonter, does not mean to bust on the transplants.

“I’ve met a lot of nice ones,” he said, adding that he tries to calm down fellow Vermonters who are impatient with the new neighbors.

“Just take a minute to step into their shoes,” he said. “Do they aggravate the piss out of you most every day of the week? Absolutely. But deal with it. Don’t lose your cool. Look at the ones we first started with, in March. Now we don’t hardly have to say anything to them.” 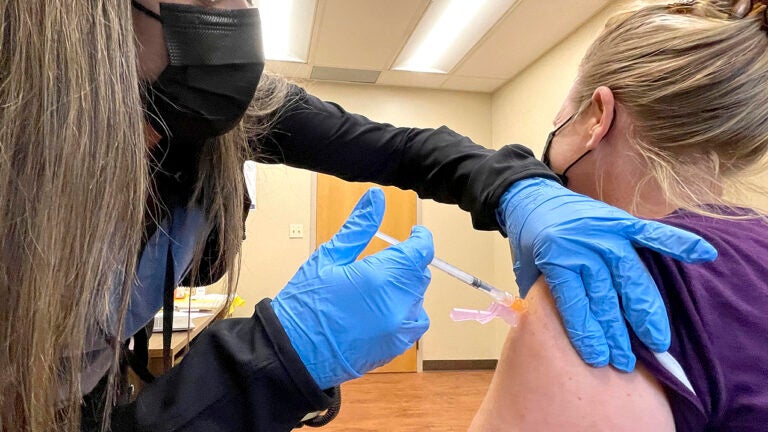 Fauci: More 'pain and suffering' ahead as COVID cases rise