It may take a couple of years, but eventually you’ll be able to again look down on the city from atop the Prudential Center, 750 feet above the Back Bay.

When the Top of Hub restaurant that occupied the 52nd floor closed earlier this year, so too did public access to the highest manmade vantage point in New England. But developer Boston Properties, which owns the Pru, on Tuesday filed plans with the city to remake the top three floors of the tower. It envisions a ‘ with “breathtaking unobstructed views” of the city below, and a visitor’s center both up in the sky and on the ground level.

The developer hopes to start a renovation early next year, and open an observation deck in 2023.

It’s a plan the company hinted at earlier in January when they moved to close the half-century old restaurant — known more for its jaw-dropping views than its cuisine — and the related, if tired, Skywalk two floors below. When the COVID-19 pandemic hit in March, the sudden closure of all restaurants meant the Top of the Hub didn’t was unable to have a proper sendoff.

While detailed plans here aren’t yet available, preliminary sketches show an indoor/outdoor deck on the 51st floor, which the developer promises will offer “an immersive experience in local geography and history.” It will spruce up the tower’s iconic “Prudential” sign as well, and improve exterior lighting. Earlier this year, Boston Properties estimated the project would cost $125 million.

“At a time when many are missing the sights and sounds of our beloved city, Boston Properties is pleased to be taking the next step in creating a dynamic new observatory experience at Prudential Center,” said Bryan Koop, who heads the firm’s Boston office, located a few floors down in the Pru. “We look forward to working with the Boston Planning & Development Authority and community to create an exciting destination for local residents and visitors alike.”

The project will need approval from the BPDA, which has said it’s “critical” that the top of the Prudential be open to the public. Since the observation deck at what was then known as the John Hancock Tower closed after the terrorist attacks of Sept. 11 2001, the Pru has been the only tall building in Boston where the general public can access the top floors, even if for a fee.

Boston Properties plans to pair that up-in-the-sky experience with upgrades on the ground as well, proposing a new pavilion and entryway at the base of the tower. It will use the space to host public events, the company said, but also serve to better link the observation deck and the street, part of a plan to encourage tourists to see the sites of Boston from above, then go visit them on foot.

Of course, the plan presumes that, by 2023, more tourists will be back in Boston, and that they’ll be willing to ride an elevator with strangers. Assuming that happens, Boston Properties said, it will be ready to welcome them with a new take on the top of the Hub. 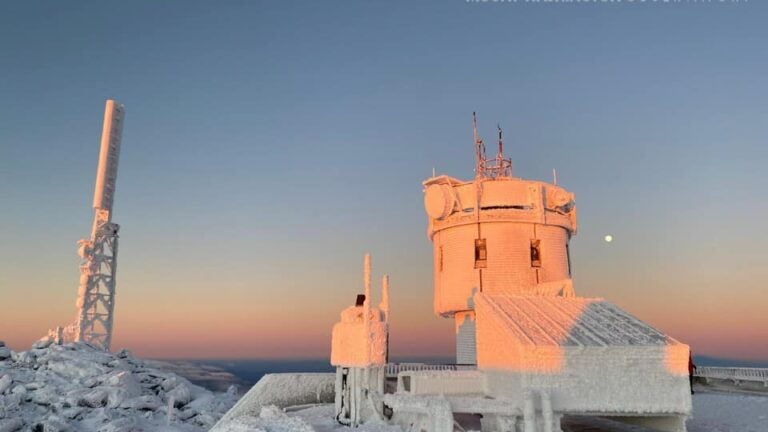 Life in the extreme: What it's like to be an observer on Mount Washington