An Italian American organization says it was surprised to hear about Boston’s plans to relocate the North End’s Christopher Columbus statue that was beheaded earlier this year.

On Monday, Mayor Marty Walsh announced the vandalized sculpture, once repaired, will be displayed at a North Margin Street affordable housing development in the works by the neighborhood’s Knights of Columbus — not Christopher Columbus Park, where the statue was erected over four decades ago.

In its place, the city will install a yet-to-be-designed statue “highlighting the Italian immigrants of the North End,” Walsh said.

Frank Mazzaglia, chairman of the board for the Italian American Alliance, told Boston.com Tuesday the plan took his organization — which had pushed for the statue to return to its pedestal — by surprise.

In June, the alliance called off a rally it had organized to call for bringing back the Columbus statue after receiving the opportunity to talk with Walsh, who told the statue’s supporters he would speak to them again before a final decision was made, according to Mazzaglia. The mayor did not, he said.

“When this came out the way that it did, to put it mildly, it was surprising,” he said.

Mazzaglia noted, however, it’s important that the statue is “returned to a prominent place and it’s safe,” which the current plan would allow. Supporters figured the sculpture could likely be vandalized again at the park, he said.

“But it’s just not what the mayor promised,” Mazzaglia said.

The mayor’s office did not respond to questions about the commitment to a second meeting with the alliance.

The city’s current plan follows an August vote by the Boston Art Commission to begin a process to study the statue’s future.

Purchased from Benedetti Bonnati, a marble supplier in Italy, and carved by sculptors in Carrara, Italy, the statue was installed at the park on Oct. 21, 1979, after it was acquired by the Friends of the Christopher Columbus Committee, according to city officials.

The Art Commission received two conservation reports for the sculpture, which both indicated that repairs to the head and neck area of the statue will be visible once completed and conservators are unable to enhance its structural integrity, officials said.

In August, the commission heard verbal testimony from 13 people at its meeting and has since received over 100 written testimony submissions about the statue. The commission will likely hear more input on Oct. 13.

According to officials, the Knights of Columbus wrote to the city to offer space for the statue in their forthcoming development, and the city has subsequently struck a deal to turn the sculpture over once repairs are finished. 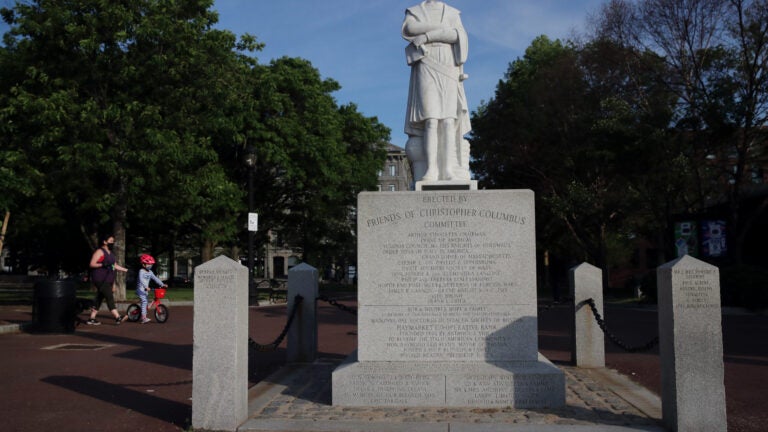