He emerges around dusk to some fanfare, before he traverses the Hill.

The melody flows from his bagpipes, echoing through the streets, and drawing his audience out of their homes — neighbors who have waited for his return and the joyous glow of his weekly serenade.

No, this is not folklore. This is the tale of the “Pinckney Piper,” right here in Boston, 2020.

The story begins on the cusp of St. Patrick’s Day this year, as annual festivities were thwarted by the arrival of the coronavirus pandemic in New England.

Jeremy Bell, a multi-instrumentalist who regularly performs Irish music at Emmet’s Pub in Beacon Hill, like so many, found himself without plans to mark the holiday.

Acting on a suggestion, Bell opted to celebrate by taking his bagpiping to the streets of his neighborhood.

“I piped one time around the Hill and then people started saying, why don’t you do this every night?” he says.

But Bell knew better: “A gentleman is somebody who knows how to play the bagpipes but knows when to stop,” he quips.

Still, that first appearance set in motion what began as another peculiarity during a most unusual year, and is now an expected, even highly anticipated, part of life on the Hill.

Throughout the course of the pandemic, Bell has hit the streets every Saturday night, amassing a cult following from his neighbors, many of whom now mark the weeks that pass by with the arrival of his bagpipes echoing off the bricks.

“Everybody really, really does look forward to it,” says Bell. “Somebody said, ‘You cannot stop, because my children, my kids, will not go to bed until they’ve heard the pipes … They’ll be looking forward to it all day.'”

Born in Scotland, Bell immigrated to the United States about 25 years ago and has been bagpiping most of his life. (“I’ve been playing them as long as I was able to defend myself,” he says.) When he’s not playing to the masses, the 50-year-old author and Hill resident is usually at the Boston Athenæum, writing about his primary subject, William Hogarth, the 18th-century English painter and cartoonist.

Now spreading cheer in his adopted home, Bell’s latest role is the “Pinckney Piper” — a nickname bestowed to him in reference to his preferred weekly route down Pinckney Street.

His mobile performances often attract a roaming audience alongside him, walking from a pandemic-safe distance  — not unlike the Pied Piper, says City Councilor Kenzie Bok.

Seriously the Saturday night #BeaconHill bagpiper is now the highlight of the week on my street. #LifeInTheTimeOfCorona #district8 #bospoli #mapoli pic.twitter.com/D1EVpW1N61

Other onlookers gather on the sidelines, some even from the rooftops, to cheer on the musical parade.

“Whenever Jeremy is coming by, you go out onto your stoop and everybody else is already out, and people definitely wait expecting it,” Bok, a Hill resident, says. “We all sometimes as we watch … wave to each other, so it just becomes this occasion for [the] community.”

When Bell has been unable to perform, his 20-year-old son, Calum, has taken his place. On one occasion, a bagpiping Boston firefighter joined Bell “to give me a break,” Bell says.

His tours around the neighborhood now also include a street party of sorts beforehand, where Bell picks up the accordion and leads singalongs. 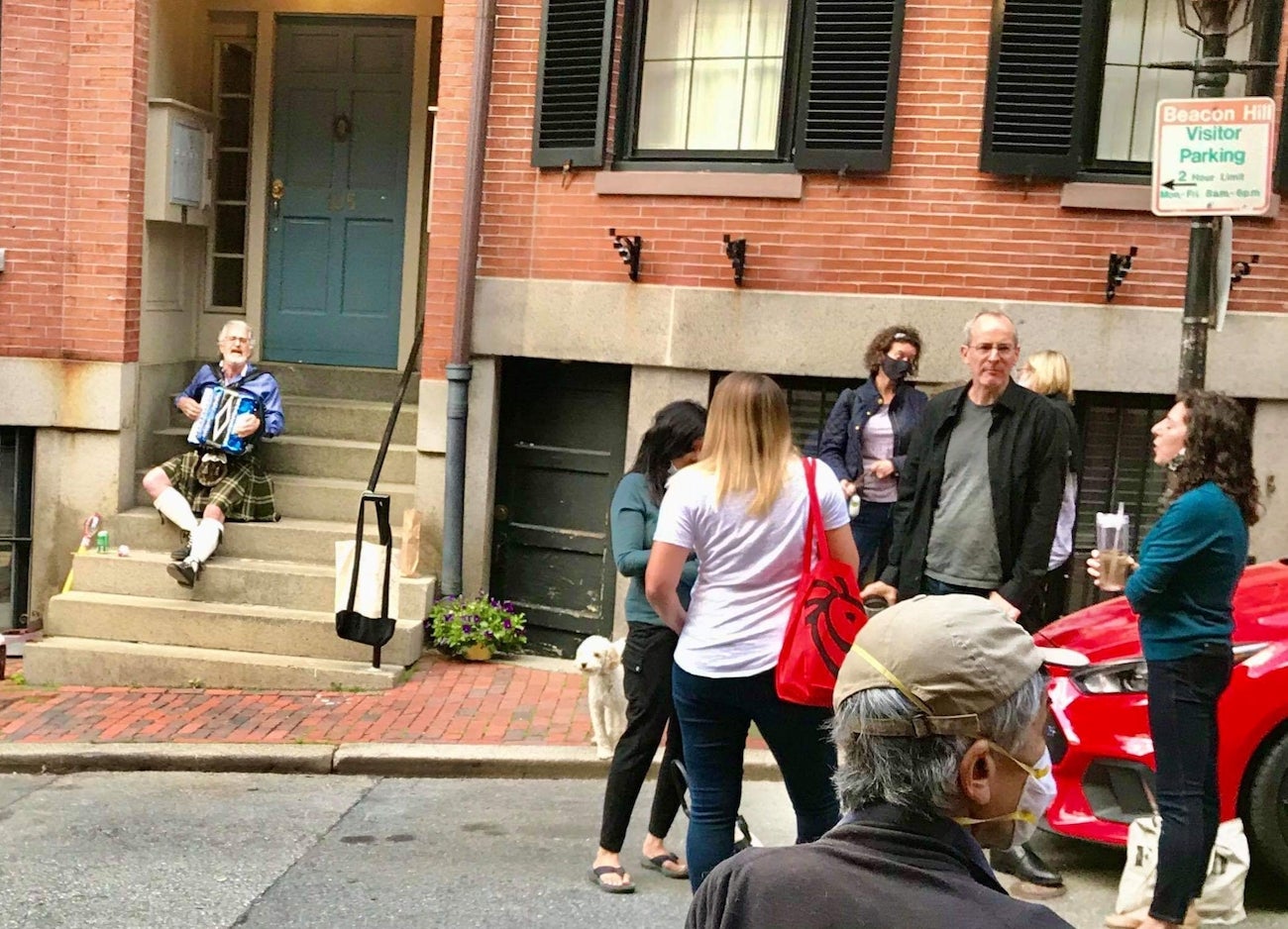 Admittedly, the festivities have sometimes delayed his appearance along his walking route.

Now, “when people say, ‘You were late,’ I say, ‘Yeah, because somebody brought a really good bottle of scotch,'” says Bell, who is also generously offered whiskey and rum along on his piping path.

Yet, even with the support, it appears not everyone is a fan.

Bell recalls during one gathering, as he and his son were playing Irish fiddle, police officers showed up. Someone had apparently made a call about the scene. 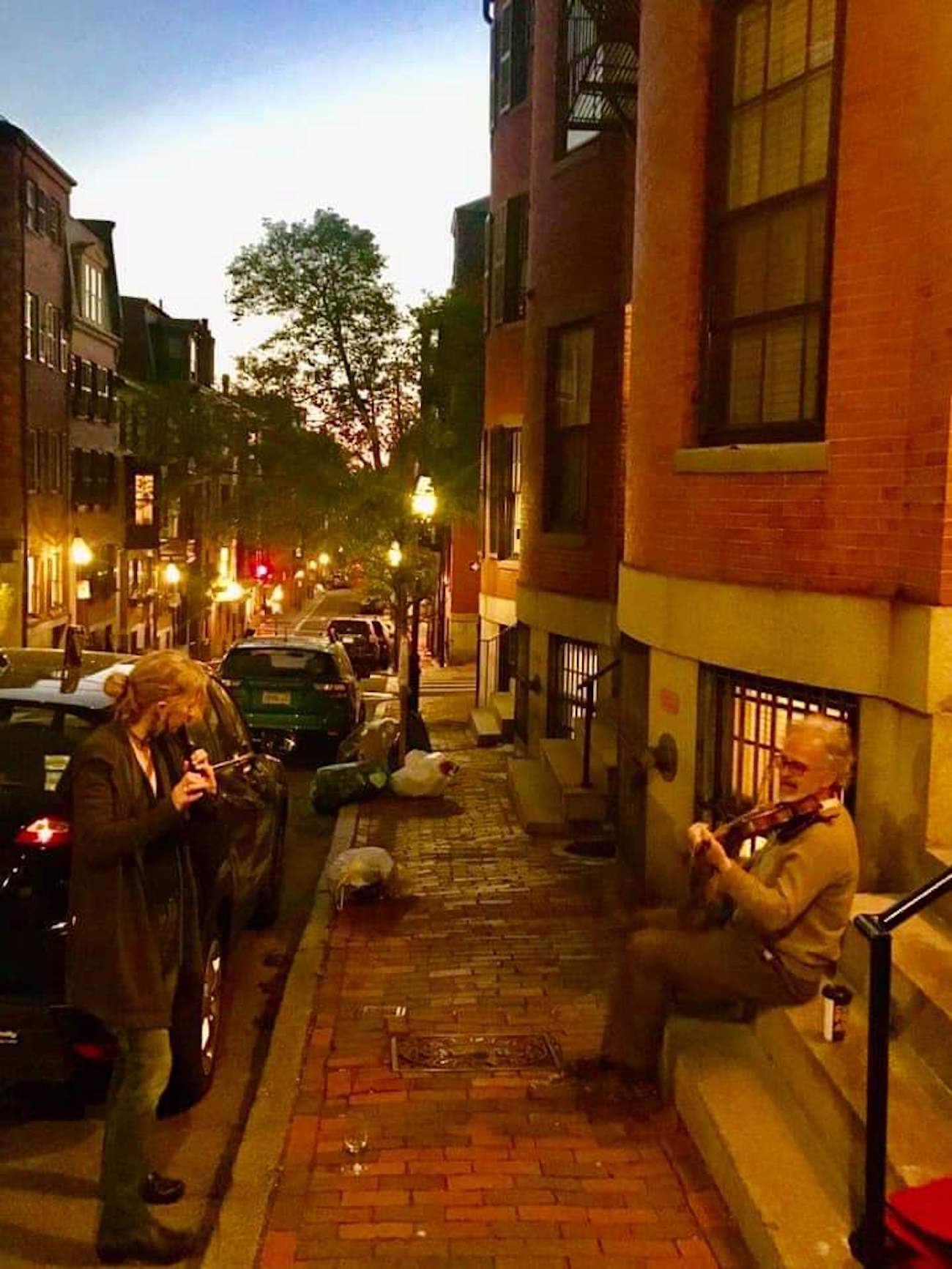 Indeed, months after that first hike around in March, it’s clear Bell is still having having a laugh about the weekly tradition he’s now responsible for.

And as the pandemic continues on, without a clear end in sight, so too will Bell’s performances. He estimates the fun will keep on going, possibly through next spring.

“I’m going to keep on piping until I get a temperature of 105 and keel over,” he says, jokingly. “No, we’ll keep going, even when it gets snowy. I’m from Scotland, we can pipe through the snow.”

Yet, Bell notes that his public serenades would not be as welcome a site in Scotland. Only Boston could allow this every week “and not be throwing tomatoes,” he says.

“I love this country,” he says. “You can have fun here, even during such horrible times. You can still bring a bit of light.” 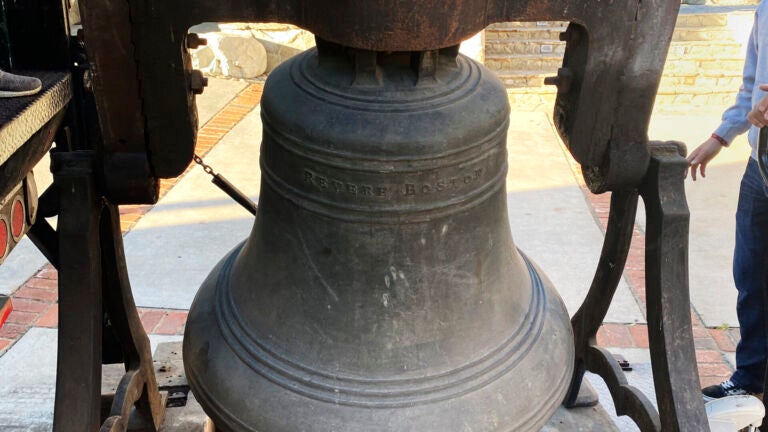 For whom the bell rolls: Paul Revere chime returning home