Boston officials, residents, and advocates alike have raised concerns in recent months and weeks about the increase in people living unhoused on the city’s streets, particularly in the area known as “Mass. and Cass,” a result of the coronavirus pandemic prompting the shut down of services across the region for those struggling with homelessness and substance use.

The city has continued to provide services since the pandemic began, making the area of Mass. and Cass, the stretch of city blocks surrounding Mass. Ave. and Melnea Cass Boulevard where services for substance use disorders and homelessness are based, even more of a destination for those in need as services elsewhere shut down.

Among the influx of individuals on the streets, there is particular concern from advocates about the rise in the number of women who are living unhoused in the area.

Sandy Mariano, chief program officer for Rosie’s Place, a shelter and community center for women in the South End, told Boston.com providers believe there’s been about a 75 percent surge in people living outside in the city.

The swell in the number of women is clearly observable when going through the area, she said.

Due to the pandemic, Rosie’s Place altered its services to keep people safe from the virus by switching its services for housed women — including its advocacy, ESOL classes, and legal services — to be fully remote. The nonprofit’s food pantry is run out of its parking lot, serving about 250 housed women a day — more than double the number of individuals who accessed the pantry pre-coronavirus.

The only programs that remain open on-site are for women experiencing homelessness.

Pre-pandemic, Rosie’s Place typically saw between 600 and 700 women come through the nonprofit’s doors daily for its mix of services. About a quarter of those individuals were usually homeless, while the rest were marginally housed or in subsidized housing, Mariano said.

With the coronavirus and the shifting of services offered by the nonprofit, Mariano estimated that between 100 and 150 unhoused women come to the Harrison Avenue building daily.

“We have basically a day shelter for women,” she said. “So they can come and eat all day long, they can hang out all day long. We have entertainment for them as much as we can. We have an advocate on duty so if someone who is homeless needs to see an advocate, we have advocates there that they can help with. They can still get their mail, they can still do all the faxing, copying printing, that stuff.”

Many choosing to visit Rosie’s Place during the day are spending nights in other shelters.

But Mariano said she and her colleagues have observed a “significant portion” of the women are opting to sleep outside, concerned about contracting COVID-19 indoors in the congregate settings in shelters.

“You see more and more folks out there and more and more women,” she said of the Mass. and Cass area. “You know that it’s not a safe situation for people who are staying outside, who may have to sleep next to people they really don’t know or who they may be afraid of. It’s always concerning. And I think that all of us, all the shelter providers and those who work with low-income and homeless folks in the area, are all very worried about vulnerable populations, especially women, who are often much more vulnerable or taken advantage of.”

Mariano said the women have shared the circumstances they face when they come onsite. One woman recounted how someone she knew on the street let her stay at their house, where she was raped.

With COVID-19 exacerbating the opioid crisis and the factors contributing to homelessness, Boston City Councilor Annissa Essaibi-George has said she wants to see more supports and programming for women in particular, given the rise in the number of unhoused women and the uptick in violence that is being experienced with the “overcrowding” and exacerbation of the opioid crisis on the streets. She has called for a City Council hearing to increase women-specific programming and address the impact of the opioid epidemic on women’s health.

“Well before the beginning of the pandemic, we saw a significant growth of the opioid crisis due to the concentration of services in Boston,” Essaibi-George said in a statement to Boston.com. “In recent years, we have seen a shift in substance use related to fentanyl and the growth of crystal meth in the drug supply which is one of factors driving the increased violence, often targeting the most vulnerable individuals. Within the population of unsheltered individuals, there is an urgent need to create women specific programming to support victims of domestic violence and human trafficking.”

Pre-pandemic, nonprofits and service providers were already overburdened with the amount of help that people need, Mariano said. Throwing a pandemic on top of the crisis of homelessness, as well as the opioid epidemic, means the agencies and processes for getting or keeping housing, which can be difficult to navigate to begin with, are even more so, she said.

The Rosie’s Place staffer has been working in the industry to address homelessness for 20 years, and she said there’s no question that this year has been the most difficult she’s seen — both as far as the evident need and the challenge of changing programming to prevent the spread of the virus.

“This pandemic has just magnified the problems that we already were encountering, and it’s making it much harder,” she said.

As the pandemic continues and with the state’s eviction moratorium set to expire, Mariano and other advocates are warning of a surge in the number of people who are living unhoused on the streets or staying in shelters. The demand on shelters will keep rising, she said, with providers still facing the added challenge of maintaining social distancing to keep the congregate settings safe from the virus.

“We are going to be faced with people with huge rental arrearages that no one is going to be able to come close to, and we’re going to see a whole other group of folks that are ending up homeless as a result,” Mariano said. “So I think we’re in for it.” 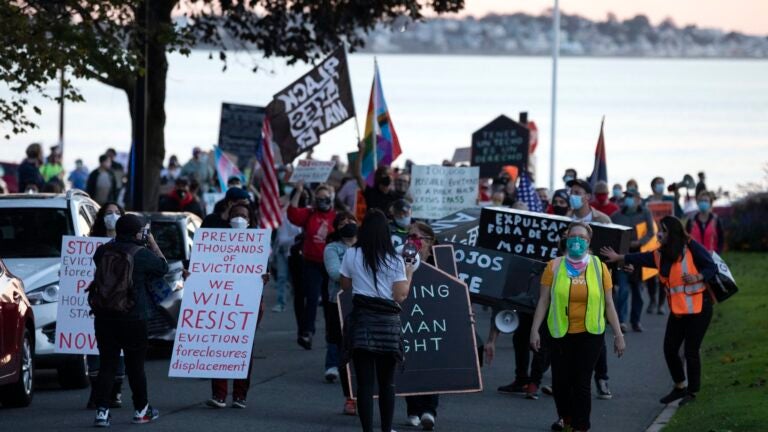