MBTA officials — quite literally — could not handle the amount of public pushback they received to the prospect of sweeping, pandemic-induced service cuts during their meeting Monday.

According to Joe Aiello, the chair of the agency’s Fiscal and Management Control Board, there were more than 400 emails and 124 voicemails related to its commuter rail and ferry services alone, far more than officials could play during the already-marathon virtual meeting Monday afternoon.

The wave of comments would have to be forwarded to each of the board members to listen to on their own time, Aiello said. But he did ask MBTA staff to provide a few select messages to give everyone at the meeting Monday a “sense” of the public feedback.

First, and perhaps foremost, was the response from Boston Marty Walsh, who expressed concern about the impact of cutting service in years ahead on his city’s recovery from the pandemic, especially for its essential workers and communities of color, and said the agency should seek additional government funding.

“As mayor, I understand fiscal realities,” said Walsh. “I recognize the severe challenges that come with budget shortfalls. But I’m also convinced that reducing service levels in the most transit-dependent communities, just as we are trying to get our businesses reopen and open our economy and get our economy moving again, will undermine our progress.”

While the MBTA has yet to make any final decisions, officials have slowly waded into what type of service reductions may be necessary to close a budget shortfall resulting from a sharp drop in ridership (and a corresponding drop in fare revenue) expected to fully rebound for at least several years. During a meeting earlier this month, MBTA officials floated a range of potential cuts, from deep reductions in commuter rail and ferry service to consolidating bus routes to running core MBTA lines at 10-minute frequencies during rush hour.

Walsh, who is staring down his own municipal budget cuts due to COVID-19, acknowledged that cutting service might “might fix the short-term bottom-line issue.”

“But if it hurts workers, discourages ridership, and slows our economic recovery, we will be facing even bigger problems down the road,” he said. “We must avoid fare increases and maintain sufficient service levels prioritizing most transit-dependent communities.

According to Walsh, 12 percent of commuters in the Greater Boston area rely on mass transit to get to work. That number rises to 33 percent for Boston residents and to more than 50 percent for communities like East Boston, where residents are disproportionately low income and have been working on the front lines of the pandemic.

“Stripping our essential workers in these vulnerable communities of this vital resource at a time when they’re already struggling would be devastating to them, and would make our collective recovery more difficult,” Walsh said.

The mayor said that the MBTA should “first focus on outside funding to close the gap.”

“This could mean going in partnership to the federal government for support, assembling a coalition of cities and transit agencies, whose economic recovery, like our own, requires accessible affordable quality transit,” he said.

For their part, MBTA leaders have done just that. Last month, Steve Poftak, the T’s general manager, joined several of his peers from transit agencies across the country calling for additional federal aid. But in a video statement Monday evening, Poftak reiterated that “we cannot balance the budget without making difficult tradeoff decisions.”

Public transit agencies across the country are facing immense challenges from the pandemic financial crisis. While we forge ahead to alleviate the deficit, we promise to make decisions transparently & collaboratively with our riders & employees. See how in GM @spoftak‘s update. pic.twitter.com/PXUaKF0HMv

“As serious as the problem is, we are forging ahead and remain committed to still getting our riders where they need to go by developing proposals now to tighten financial controls and reduce expenditures,” Poftak said, adding that the agency will “continue to fight for additional lifeline funding from the federal government.”

Somerville Mayor Joe Curtatone says the T should also look closer to home for more funds. In a separate message for the FMCB on Monday, Curtatone said that the state government, along with the federal government, should also “intervene with the revenues that are needed” to close the MBTA’s budget gap.

“I am deeply concerned that our commonwealth’s fiscal planning constraints put this board, this organization, and all of the people that depend upon us in a position to squander your hard won success,” Curtatone said. “I struggle to understand how an equitable and just economic recovery proceeds with mass transit on the sidelines.”

The meeting Monday came as a coalition of transit advocates implored state legislators to revive a tax package that was passed by the House earlier this year to preserve MBTA service levels. The legislation includes a 5-cent increase in the gas tax, as well as increases in the corporate minimum excise tax and ride-hailing fees. It passed the House with a veto-proof majority in March but has yet to advance in the Senate.

“The need to provide help to transit systems statewide has only increased then,” Chris Dempsey, director of Transportation for Massachusetts, said, according to the State House News Service. “We need the Senate to step up to provide operating budget resources for the MBTA.” 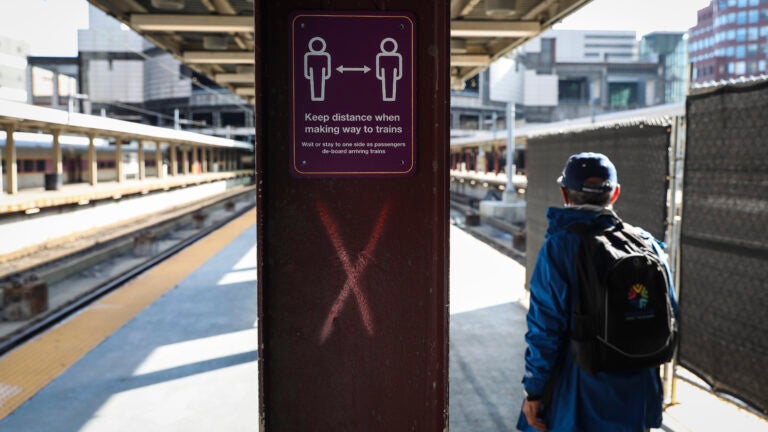