A state inspector has found no evidence of an equipment malfunction in the deadly elevator accident at an Allston apartment building last month.

The Sept. 14 incident resulted in the death of Carrie O’Connor, a 38-year-old French lecturer at Boston University who recently moved into the 1140 Commonwealth Ave. building.

O’Connor had been trying to move a large package that apparently contained a futon-style bed frame into the old-fashioned elevator when the car suddenly dropped from the first floor lobby toward the basement. A report by Boston police said she was found dead at the scene, trapped in the elevator doorway.

Some witnesses raised questions at the time that there was something “faulty” with the old elevator. But the new investigative report by the Division of Professional Licensure says that doesn’t appear to be the case.

“There is no indication that any malfunction occurred with the elevator,” Martin Guiod, a state elevator inspector, wrote in the Oct. 20 report. “It is my conclusion that the elevator was operating as designed.” Rather, according to Guiod’s investigation, O’Connor appeared to hit a switch with her package that — due to a tragic coincidence of someone pressing the call button in the basement — caused the 60-year-old “bird cage” style elevator to descend while she was inside.

Guiod wrote that the elevator has hoistway doors and a car gate that must be manually closed by the occupant. When fully closed, the interior car gate engages a gate switch on the top of the doorway, which signals to the system that the gate is closed.

According to the report, security camera footage showed O’Connor bringing the package, which was seven and a half feet long and said to weigh 79 pounds, into the elevator. Guiod did not confirm what was in the package, but photos included in the report show the name of the Walker Edison furniture company on the outside of the brown cardboard box.

The package also had language written on it indicating that more than one person was needed to move it. But for the most part, O’Connor was moving it herself.

At the elevator, another unidentified resident did briefly help O’Connor by holding the exterior hoistway door open as she used her hip to hold the inside gate door open and got the package partway in. According to the report, the other resident can be seen pointing to the car gate switch while saying something to O’Connor, but the video had no audio.

Critically, around the same time, a maintenance person in the building’s basement pressed the elevator’s call button to go upstairs.

“With the elevator being called to the basement, I know as an inspector that at this point, the only thing keeping the elevator from running in the down direction is that the car gate switch was not activated,” he wrote.

Meanwhile, O’Connor — who did not appear to hit the first-floor call button herself — was still upstairs struggling to fit the package vertically into the elevator. Video footage showed the package making contact with the gate switch as she lifted it, causing the elevator to briefly go downward. O’Connor lost control of the package when this happened, which caused it to no longer trigger the switch and stopped the elevator from going down any further. Since the car had gone down without the inner gate shut, it left the front of the elevator hoistway exposed between the first floor and the basement, the report said. With her back to the hoistway, O’Connor then repositioned herself in a squatting position and again tried to push the package up. But again, it hit the gate switch, causing the elevator to go down.

It was at that point that O’Connor disappeared from view in the video, apparently falling backwards into the open elevator shaft between floors (at some point during the car’s downward motion, the package triggered the gate switch, stopping the car from descending further).

Guiod wrote that members of the fire department, which removed O’Connor’s body from the hoistway, said that she was found “pinned between the hoistway wall and the elevator.”

State officials say the elevator was last inspected on March 26. It received a notice to repair a stop switch that was loose and needed to be refastened, according to Guiod’s report. A licensed mechanic from Commonwealth Elevator issued an attestation certifying that the repair was complete on April 22. 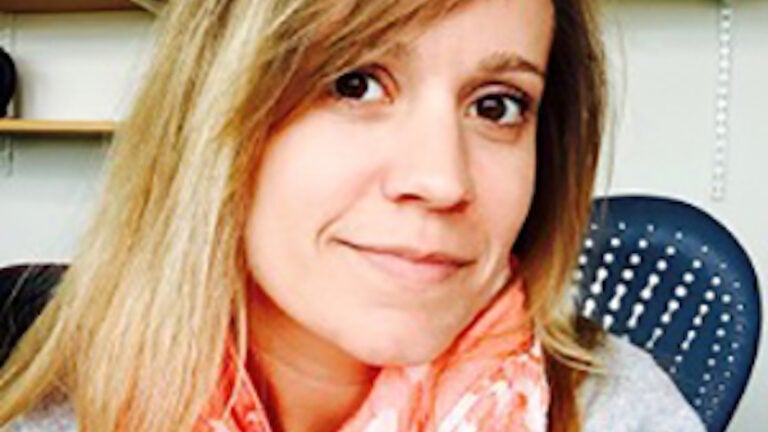