Citing another contentious weekly political protest planned for Thursday, Swampscott officials decided to move classes at the nearby Hadley Elementary School to remote learning for the day, according to the town’s school district.

Families of Hadley students were notified via email on Wednesday. The decision was made in considering the safety of students and the rest of the school community, the email said.

“Due to the fact that we are still awaiting results of the election and out of an abundance of caution, Superintendent [Pam] Angelakis and I [school Principal Ilana Bebchick] have decided that tomorrow will be a remote day of learning for Hadley students,” it says.

The Trump side is organized by Dianna Ploss, a former New Hampshire conservative talk radio personality fired in July from hosting her own show on WSMN 1590 after an incident, caught on video, where she admonished landscapers to speak English. During the rallies, Ploss has referred to BLM as “Burn, Loot, Murder,” and during some of them someone has held the Confederate flag.

Couple Daniel Robinson and Kathy Mikk, who have a child that attends Hadley, said they’re frustrated the protests have interrupted learning for kids there.

“Very frustrating, but also unnerving and terribly disruptive to children who are already trying to navigate life and school in a pandemic,” Mikk said in an email to Boston.com. “That a group of rally attendees feels empowered to be disruptive to the point where an elementary school must be held remotely for safety feels wrong on many levels.”

Sean Fitzgerald, Swampscott town administrator, said in a past interview with Boston.com that students “have been impacted by some of the foul, vile language from the Trump supporters.”

The rallies are protected under First Amendment rights, and what the town can do to address them is limited, noted attorney Tom McEnaney of KP Law, which represents the town, during a meeting of the Swampscott Select Board Wednesday night. The town has researched if there’s anything that can be done to mitigate the situation, he noted.

“Generally speaking, unfortunately, there’s not much that can be done in light of the fact that it’s protected by the First Amendment,” McEnaney said.

Polly Titcomb, vice chair of the board, also expressed frustration.

“I do believe that we’re all really frustrated by the limitations we’re facing by the law, and that’s very much a controlled understatement,” she said during the meeting. “But I do have full confidence in the town’s commitment to figuring out what the parameters of the law are and the ways that we can act responsibly within the bounds of the law.”

Keiko Zoll, who represents Swampscott’s sixth precinct at Town Meeting, voiced concern for the Hadley school community during the meeting.

She said she stood with a group of parents and members of the BLM group to form a line near the school during last week’s protest. The effort included people holding up sheets to block the view of the protests from the school.

“I can hear the people shouting from inside my classroom,” Eva Wilkinson, 8, a Hadley third grade student, told Wicked Local last week. “It was really loud and scary. I hope they stop soon.”

Zoll noted she was concerned about Thursday’s protest, citing Ploss’s arrest in Plymouth last weekend when she allegedly punched someone on the opposing side.

“The safety at everyone at Hadley must be made paramount,” Zoll said. “We are now faced with a powder keg situation that puts our students, their families, and their teachers at risk.”

Ploss records the rallies live via Facebook and posts them to her professional page. Thursday’s rally included singing and waving of flags bearing Trump’s name, the video shows. Ploss did urge her group to not engage with the counter-protesters, in contrast to past weeks when she used a microphone to make her point, shouting her derogatory nickname for BLM. Multiple police officers could be seen stationed around the area.

Ploss also floated the idea of another rally next week in Swampscott.

“We should be here every Thursday,” she says around the 21-minute mark. 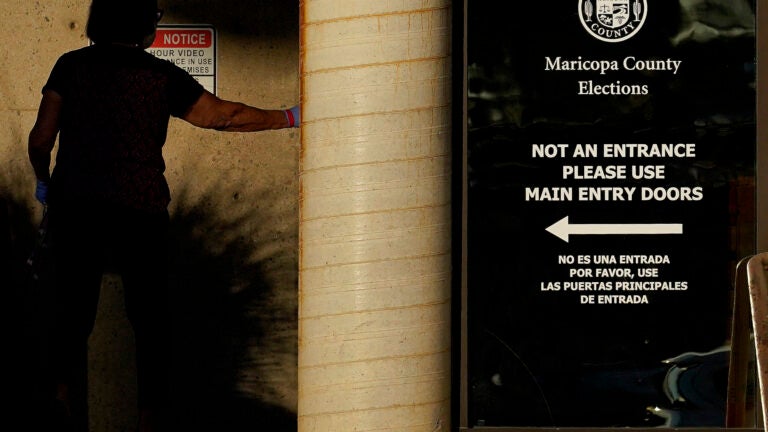 The AP called Arizona for Biden. Here’s a closer look.