A Cambridge eatery had its mural dedicated to the late Rep. John Lewis vandalized overnight Monday.

In a video posted on Twitter by Urban Hearth, black spray paint can be seen running throughout the mural, and over the faces depicted in it.

“We are heartbroken, angry, and will be making some noise,” the tweet said.

Last night, our mural created by @RockyCotard and dedicated to Rep John Lewis was vandalized. This is a hate crime, a deliberate act of violence against everything that the mural represents. We are heartbroken, angry, and will be making some noise. @CambridgePolice @MayorSiddiqui pic.twitter.com/FRv0Tu2imS

In a statement, Mayor Sumbul Siddiqui noted that the restaurant had worked with Rocky Cotard, a local Haitian artist, to have the mural created to honor the longtime Georgia congressman and civil right activist after his death earlier this year. The mural features Lewis, as well as a quote from him, “Never, ever be afraid to make good trouble.”

“The deliberate act of tagging and vandalizing this mural delivers a strong message,” Siddiqui wrote. “That hate, however ugly, is a reality that exists even in Cambridge. Racism exists in Cambridge. I want everyone to know that this will not be tolerated in Cambridge, by the City Council or our residents.”

Erin Miller, who owns the restaurant, taped a statement to the vandalized mural, urging people to look at what happened.

“This is an act of hate against all of us!” it reads, according to a photo from 7 News. “It’s a violation of all that is decent, good and hopeful in our world. It is meant to cause pain. But we do not have to accept this. The more of us who share the burden of this pain in solidarity, the less power it has.”

Someone vandalized a mural of the late Congressman John Lewis at the @urbanhearth restaurant in Cambridge. @CambridgePolice are asking anyone with info to contact them. pic.twitter.com/nXkg78m5qF

Siddiqui said other buildings in the area were also vandalized, but “this is the only one with such a clear message of hate.”

The incident remains under investigation, and no one has been charged as of Thursday afternoon, according to police. Anyone with information is asked to call Cambridge police at 617-349-3300, or use the department’s tip line by texting 847411 and beginning the message with TIP650. 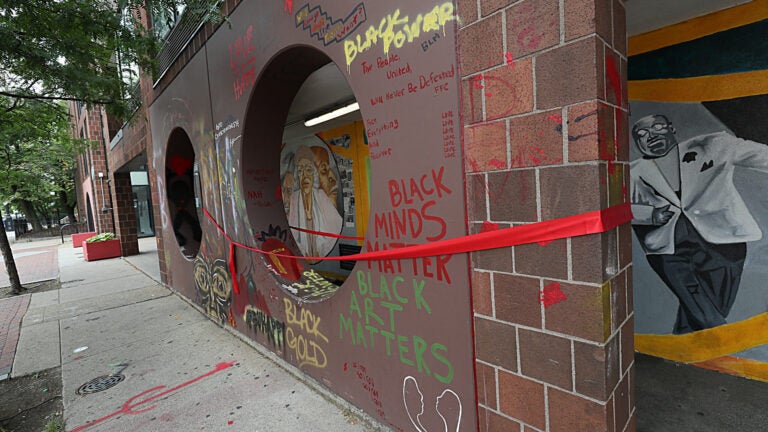