Citing potential lost opportunities for economic growth, essential workers in need of reliable transportation, and the push to reduce greenhouse gas emissions, advocates and officials are raising their voices to call on MBTA leaders to reconsider proposed service cuts as the system suffers pandemic-related financial losses.

On Thursday, a rolling rally of transit workers and riders organized by the Public Transit Public Good Coalition brought that message outside the State Transportation Building in Downtown Boston.

While MBTA officials have maintained rollbacks are needed so the system can survive a costly loss in ridership this year, advocates said the agency should look to bring in new revenues.

A press release from the coalition pointed to plans to improve infrastructure nationwide from President-elect Joe Biden and said locally “progressive revenues could be generated by raising the corporate income tax rate and other measures.”

The group said following through on the service reductions would be “foolish” when additional government resources could become available soon.

“The state has been devastated by the coronavirus pandemic. People need support, not a rollback in essential services,” Lee Matsueda, executive director of Community Labor United, which convenes the Public Transit Public Good Coalition, said in a statement. “Now more than ever, we need a safe, affordable, and accessible transit system that works for all.”

As the MBTA works to navigate budget shortfalls, possibly as high as $600 million in the next fiscal year, officials say they’re looking to put in place temporary cuts that seek to spare “essential service” areas where ridership is highest and relies the most on public transit.

The proposed rollbacks include eliminating all ferry service and 25 bus routes; reducing commuter rail service, including ending weekend service; cutting back on frequency on the Blue, Green, Orange, and Red rapid transit lines; and terminating service at six stops on the Green Line’s E Branch.

Commuter rail and ferry changes could potentially arrive in January, while other cutbacks could begin in the spring and summer. The MBTA’s Fiscal Management and Control Board plans to make a final decision next month.

While MBTA leadership has maintained the cuts will not be here to stay, some advocates are concerned the reductions will become permanent, particularly because riders may be deterred by the scaled-down offerings — an issue that could trigger a long-term revenue problem for the transit authority, they say.

Many local elected officials in the region have their own concerns.

On Monday, leaders from Hingham, Hull, Scituate, and Cohasset publicly voiced opposition to the plans, particularly those that would cut back service on the commuter rail’s Greenbush Line and mean the end of the Hingham-Hull Ferry.

“We are angry and we are disappointed that the MBTA is considering the elimination of the ferry and cutting services to the commuter rail,” Republican state Sen. Patrick O’Connor said during a press conference. “The long-term impact these cuts would have is enormous. [The MBTA’s] approach is so short-sighted, and will surely stifle the economic recovery of the region once this pandemic is over.”

Together, the four communities have launched the “Save the Greenbush-Save the boat” campaign to raise awareness. On Thursday, officials from each town organized a “Ride the Ferry Day” to protest the changes.

“These cuts would not only adversely impact Hingham residents and Hingham business owners, but would hurt the economic development throughout the entire South Shore,” Hingham Selectman Joseph Fisher said. “It also sends a signal — the wrong signal — that Massachusetts is no longer committed to reducing greenhouse gas emissions.”

In a letter to Gov. Charlie Baker and state Transportation Secretary and CEO Stephanie Pollack last month, Cohasset Select Board members highlighted how the town has made investments to help spur transit-oriented development, including affordable housing.

“Affordable housing is only effective if it is accessible to everyone, and public transportation is the cornerstone of that accessibility,” Robert Jeffers, chair of the Cohasset Affordable Housing Steering Committee, said Monday.

In Boston, city councilors have asked the FMCB to at least hold off on making decisions until officials have a better understanding of any possible federal resources that could become available next year.

Several councilors participated in a “Save Our Trolley” rally last week at the E Branch’s final stop on the Green Line at Heath Street, Universal Hub reports.

“This is the most ill-conceived proposal I’ve ever heard in my career in Boston politics,” Councilor Matt O’Malley said.

Some advocates are bringing their message to the airwaves, too.

On Thursday, the Public Transit Public Good Coalition announced it will roll out a new advertising campaign against the proposed changes next week during prime-time and daytime television and on digital platforms.

“Transit justice is social justice,” Jim Evers, president of the Boston Carmen’s Union, Local 589, said in a statement. “Public transit is a public good, and we’re in this fight for the long haul.” 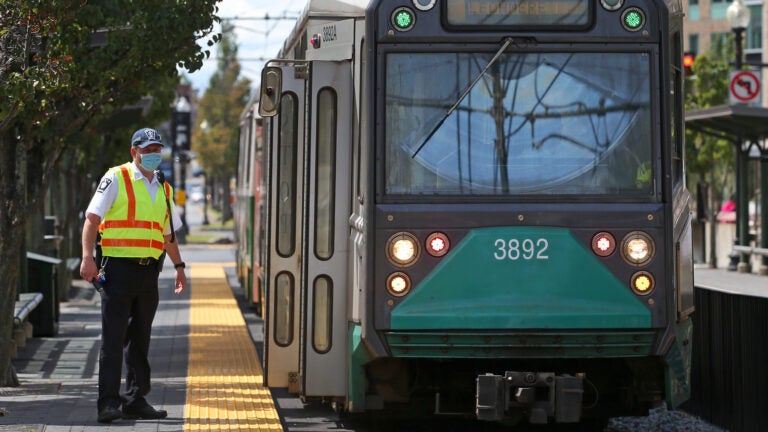 The MBTA says its planned service cuts will be temporary. Transit advocates worry the effects will be permanent.