The U.S. Coast Guard confirmed Wednesday the identities of the four crew members onboard the Emmy Rose when the 82-foot commercial fishing vessel disappeared off the coast of Cape Cod earlier this week.

The vessel, which homeported in Portland, Maine, was en route to Gloucester.

“The decision to suspend a search is never an easy one. Our crews conducted searches continuously for over 38 hours covering an area of approximately 2,066 square miles,” Capt. Wesley Hester, search and rescue mission coordinator for the Coast Guard’s First District, said in a statement. “We extend our condolences to the friends and loved ones of these fishermen during this trying time.”

Over the last 32 hours, we have searched approximately 1,500 square miles. The search continues with #USCG Cutter Vigorous and Air Station Cape Cod crews for the four missing fishermen. pic.twitter.com/wewbLWx5tz

The vessel’s owner told officials no one answered the ship’s satellite phone.

On Tuesday, the Coast Guard said it was able to recover the ship’s EPIRB “with no sign of the fishermen, or vessel.”

According to The Boston Globe, the vessel was built in 1987 and its condition and safety equipment passed Coast Guard inspection in August.

The crew sent no mayday call or call for help from the satellite phone, the newspaper reported. The EPIRB signal was sent automatically.

“They were making their last trip before Thanksgiving,” Nick Giacalone, co-owner of the Fisherman’s Wharf Gloucester, where the ship was supposed to dock around 7 a.m. Monday, told the Globe. “Then this had to happen.”

Giacalone said he knew Blethen and would usually see the same crew members about once a week over the past year. The crew was experienced and the vessel was well-maintained and able to handle the 45,000-pound haul, he said.

He spoke with the crew via the satellite phone around 8 p.m. Sunday, he said.

“I don’t think it’s anything to do with [seaworthiness] or maintenance or lack of maintenance,” Giacalone told the Globe. “Whatever triggered it happened fast, and it was totally unexpected. … Some freak accident happened. That’s really the only thing it could be.”

Reyann Matthews, the daughter of crew member Jeff Matthews, told the newspaper her father “was the best man I ever met in my entire life.”

”He would give the shirt off the back for someone,” she said. “He would go without just to make sure his kids had everything they needed. He was the man I could lay my head on when I was crying and would give me words of wisdom so I didn’t give up. He was truly my best friend and my other half and this is the worst thing that’s ever happened.” 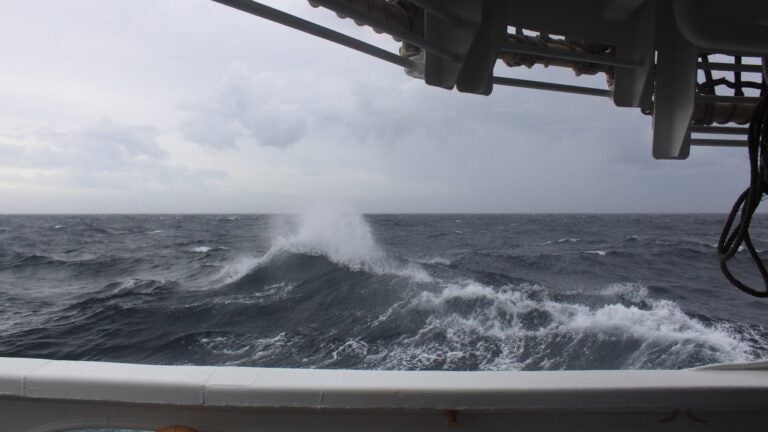