Tucked behind the golden dome of the State House on the North slope of Boston’s historic Beacon Hill neighborhood is Temple Street, a picturesque scene dotted with lampposts that stay lit by a flickering flame day and night.

But soon, the methane-fueled fire may be swapped for its more energy-efficient counterpart: an LED bulb.

The City of Boston has allocated $400,000 for a pilot project that, over the course of 18 months, will look into converting the colonial lanterns from gas to electric. The push for the switch came after 32 neighbors signed a petition asking the city to use Temple Street as a springboard to study how officials could eventually phase out gas fixtures across Boston’s historic districts, including Beacon Hill.

“The Public Works Street Lighting Division is currently in the exploratory phase to locate ideal locations that would maintain the character of the existing lights while also reducing overall maintenance costs and improving the carbon footprint,” a spokesman for the Public Works Department said. “The City will continue to explore possible neighborhoods that could benefit from this conversion, which includes Temple Street.”

Published in the Beacon Hill Times last month, an open letter from Temple Street residents to neighbors outlined how beneficial the change could be.

“Gas leaks have either killed or severely weakened the 16 trees planted the same year as the gas lamps were installed on Temple Street (1977),” they wrote. “Temple Street smells like gas and some homes have elevated methane levels.”

Neighbors wrote in the local paper that by 2018, six of the trees along the street had to be uprooted and removed on the same day. Hoping to save the remaining trees, neighbors said they consulted a gas expert who discovered that the plants were dying due to more than 30% methane concentrations in their soil.

“Tree roots actually ‘breathe’ and require oxygen for their cellular respiration. Leaked methane is slowly asphyxiating the trees by replacing oxygen in the soil pores,” residents wrote in their open letter.

And so the pilot project was born.

While Mayor Marty Walsh pledged to make the city carbon neutral by 2050, Boston’s Chief of Environment, Energy, and Open Space, Chris Cook emphasized how this initiative has been largely community-driven.

Though replacing the leaky infrastructure on the street has a number of added benefits — beyond keeping the trees alive — to ensure canopy growth that would help with stormwater management and produce oxygen, Cook said.

“This is a win on multiple levels,” he said. “It helps us with our carbon neutrality goal and reduces greenhouse gas emissions. So obviously, instead of sending methane into the atmosphere, we’d be able to electrify these lights.”

“While gas lamps comprise just 4% of those total street light fixtures,” Cook said, “they produce 37% of the greenhouse gas emissions from the streetlights.”

Though not everyone is in favor of the impending transition.

Robert Whitney, chair of the Beacon Hill Civic Association, which gets a say in architectural changes to the historic district, said it would take a lot to convince him that switching to electric would be beneficial since the percentage of emissions the lights produce citywide overall is still relatively small.

“The gas lights are just as important as the brick sidewalks, which are as important as our quiet streets, [and] our little cute alleyways here and there,” Whitney said over the phone from his home office as he peered out his second-floor window at a few of the glowing gas lamps speckling his street below.

Living in a house that was constructed in 1840, he said the history built into Beacon Hill is what makes it feel unique. For him, part of that history is embedded in the flickering lanterns.

Altering them, Whitney said, tears at “the historic fabric of our neighborhood.” The lamps, he added, are part of what identifies Beacon Hill as Beacon Hill. “We don’t have many tall buildings. We have brick sidewalks, we have these winding little streets and alleyways that in some cases date back to the beginning of when the city was formed.”

But Whitney said before talking about replacing gas lamps, his first priorities are addressing Temple Street’s gas leaks and dying trees, which he views as separate issues.

“I want to make sure that we have a safe neighborhood and that our trees are healthy. So there’s no reason we can’t do all of these things at the same time,” he said. “Let’s have a priority on getting the gas [leaks] repaired, which is our priority, and then have a big conversation with the residents and see about the future of gas lamps — whether we want to keep them, whether we don’t, or what are the issues that we have to talk about, and let’s do it amongst the whole neighborhood, not just with one street.”

The Civic Association contacted National Grid, which supplies gas and maintains the pipes on Beacon Hill, and the Massachusetts Department of Public Utilities to request crews that could address any leaks.

National Grid spokeswoman Christine Milligan said while there are currently no open gas leaks on Temple Street, the company has “repaired dozens of leaks in that area over the past several years.” More specifically, she said the leaks are often found in the gas lines that deliver methane to nearby homes.

Milligan said a project that would replace the gas main from Cambridge Street to Derne Street with modern plastic, and run a new plastic main under Temple Street, is currently in design.

Construction might not begin until after April 15, but once the gas lines are fixed, Whitney said the city needs to facilitate community conversations around swapping the lamps.

And what worries him most is that the city already decided to move forward with the pilot project without consulting all Beacon Hill neighbors first.

“Sometimes things just sort of move forward on their own by inertia, without any reasonable input,” he said. “A conversation really needs to be had with the members of the neighborhood. The ones who’ve lived here, in many cases for 30, 40, 50 years … What do they think about it? Why can’t their voice be heard as well?”

Chief Cook said there would be added financial benefit to an electric set-up, since keeping the gas lamps burning is an expensive endeavor.

“The current structures are delicate and intricate, they require regular maintenance or repair,” he said, noting that basic maintenance on the current lamps costs Boston about $200,000 annually.

When it comes to involving the community, Cook said city officials aim to foster formal and informal conversations around the topic.

“Success isn’t just about conversion of these LED lights, we want people to be excited about the product,” he said.

Cook added that much of the promise in this project is in what comes afterward, when crews will have developed a clearer standard for phasing gas lamps out of other neighborhoods.

“We won’t have a plan to completely convert everything right away,” he said. “But we will have an acceptable specification that when opportunities present themselves … we will be able to replace these lights over time.”

Doing away with the gas lamps, Cook added, could also have an impact on health.

“Climate crisis is a public health problem,” he said. “You want to reduce carbon emissions, you want to make sure that we’re not worsening the impact of climate change.”

There’s also the extra threat of the coronavirus, he said.

“There’s a disease that’s affecting our respiratory system,” Cook explained. “Anything we can do to reduce the presence of particulate matter and these gases in our atmosphere is going to have an immediate co-benefit as opposed to sending methane into the atmosphere.”

Despite the possible benefits, Whitney isn’t sure the lamps could preserve their antique charm with an LED bulb, and said many residents have expressed the same worry.

The Civic Association launched a survey for residents to offer their input in October and many have said they’re wary to see the iconic fixtures go.

“If the residents really want to keep [the lamps], I hope that the city listens to them,” Whitney said. “But I think that a lot of people are thoughtful as well. They want to make sure that they understand all the issues, they’re willing to hear about whatever pros and cons there might be.”

Cook said maintaining the city’s cultural heritage is just as important to him.

The city plans to partner with the preservation community and the landmarks commission “to find a replacement light that satisfies the electric needs for our greenhouse gas emission goals, and for our maintenance cost goals, but it also really marries that need to preserve the cultural identity and the beauty that people have become accustomed to in these historical districts,” Cook said. “People travel from all over the world to see the sights on Beacon Hill. We want to make sure that we’re keeping that same experience while also delivering on our environment.”

He’s hopeful the new fixtures will even bring about a sense of pride for doing “the right thing by future generations on climate change.” And he’s certain that though the flame in the lanterns may soon be gone, their comforting glow will stay the same.

“The warmth won’t just be from the lights,” Cook added. “The warmth will be the warm fuzzy feeling you have knowing you did the right thing.” 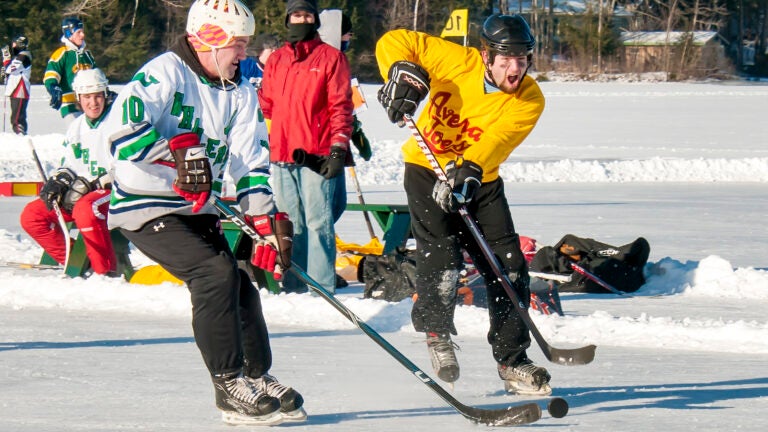 Climate change is making skating, ice fishing and snowmobiling that much more dangerous