The vast majority of Massachusetts residents say they do not regularly take public transportation.

But that doesn’t mean they’re apathetic about the deep cuts the MBTA is proposing to make next year in the face of a historic budget shortfall due to the COVID-19 pandemic.

According to a poll released Thursday by The MassINC Polling Group, nearly two-thirds of Massachusetts residents — including riders and non-riders — oppose the impending systemwide MBTA cuts, and roughly the same number say state lawmakers should allocate more funding to the transit agency so it can close its budget gap.

Faced with a potential budget deficit of nearly $600 million next fiscal year due to a sustained drop off in ridership since the beginning of the pandemic, MBTA officials plan to vote Monday to finalize the proposed cuts, which include running trains less often, eliminating commuter rail service after 9 p.m. and on weekends, closing six commuter rail stops, halting all ferry service, and widespread bus service reductions, including the elimination of 25 routes.

Taken as a whole, 64 percent of Bay Staters oppose the cuts, according to the MassINC poll. Twenty-seven percent support them and 10 percent are undecided.

Ending bus and subway service at midnight instead of 1 a.m. was the only proposed cut that mustered 50 percent support.

Whether or not respondents regularly used public transit did not appear to be a major determinant of their opinion about the cuts. 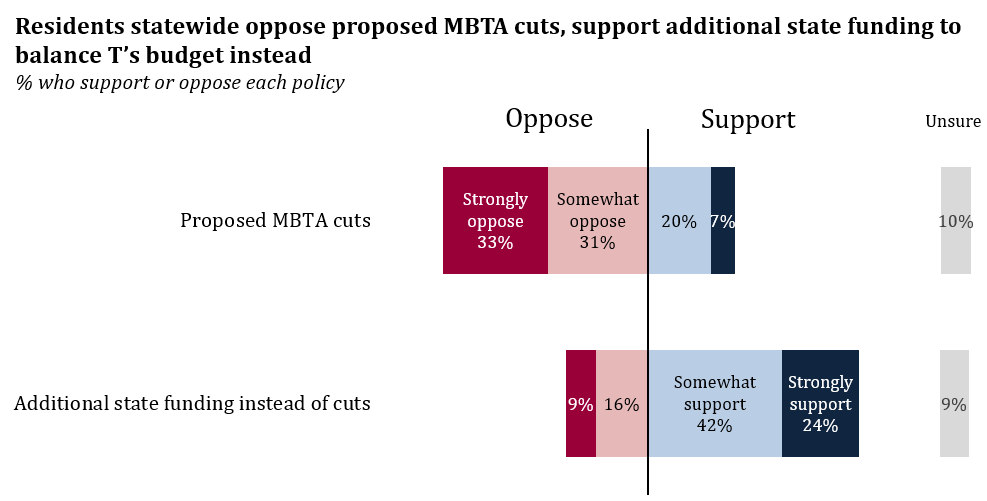 The 31 percent of respondents who said they never took public transit also opposed the cuts by more than a 2-to-1 margin, 59 percent to 24 percent.

Of course, it’s not like MBTA officials want to make the cuts, either.

“We do not want to be in this position,” Steve Poftak, the agency’s general manager, said during a public meeting Wednesday night.

But the pandemic and the resulting collapse in fare revenue has made the math unsustainable, according to Poftak. As The Boston Globe recently reported, transportation officials have noticed ridership, which never came close to fully rebounding, beginning to dip again in the midst of the second COVID-19 surge.

“We really have no choice but to make some very difficult decisions,” Poftak said Wednesday, characterizing service reductions as a “last resort” and “not a long-term strategy.”

According to the poll, 66 percent of those surveyed thought the State Legislature should increase the MBTA’s funding so the agency can balance its budget and avoid the proposed service cuts.

However, the survey did not ask how residents thought the funding should be generated or where it should come from — as Gov. Charlie Baker’s administration noted Thursday.

“This poll fails to measure public support for the question that is actually at hand — should taxes be increased in order to operate a transit system that has seen its ridership decrease by 75 percent?” Terry MacCormack, the deputy communications director for Baker’s office, said in a statement.

Another possibility, as Poftak noted Wednesday, is additional federal relief. But even if the MBTA did get more funding, the state’s transportation secretary, Stephanie Pollack, has suggested it might “make sense” to still go forward with the cuts and save the money to increase service later when ridership does actually rebound.

Not everyone is confident that will happen.

If the cuts, which MBTA officials stress are only temporary, are made, only 36 percent of residents believe prior service levels are likely to be restored.

In a statement Thursday morning, Poftak stressed that the agency is focused on preserving service “for those who depend most critically on the MBTA by reducing primarily non-essential services.” Officials say service will eventually be restored based on status of the pandemic, commuting trends, and ridership and fare revenue recovery next year and beyond.

“The T is committed to providing essential service for riders who rely most on the T for reliable transit, including low-income people, people of color, seniors, people with disabilities, and people in zero and low-vehicle households,” Poftak said. “The vast majority of MBTA service will continue, the proposed service changes are not permanent, and the MBTA will periodically realign service as feasible to match current and future ridership patterns when durable revenue is available for pay for such service.”