Riders wouldn’t be the only ones who feel the pain of the MBTA’s proposed cuts.

While local officials and transit advocates have highlighted how the plan to make sweeping service reductions would negatively impact residents and the post-COVID-19 economic recovery in the Greater Boston area, some of the people who would be most acutely affected by the cuts are MBTA workers themselves.

According to a study released Sunday by the worker-rider coalition Public Transit Public Good, more than 800 jobs — both direct MBTA employees as well as contractors — would be eliminated by the recently proposed service cuts, disproportionately affecting Black workers, who make up nearly 50 percent of T drivers and operators.

“These are unprecedented times for all workers,” Jim Evers, the president of the Boston Carmen’s Union, said in a statement. “For the MBTA to pull the rug out from under hundreds of workers and their families while the state is still reeling from COVID-19 is unconscionable.”

According to the study, the cuts would result in 460 direct job losses at the MBTA, including about 350 — or more than 10 percent — of its bus and train operators. Public Transit Public Good estimates that those job losses could cost the T, which is self-insured for unemployment claims, up to $8.7 million in benefits.

Commuter rail and ferry service, which are privately operated, would account for another 270 job losses, the study found, while another 100 would come from parking and in-station customer service staffing reductions.

While the MBTA itself — which employs a total of 6,370 employees — hasn’t released estimates for the job losses that would result from their proposed cuts, Public Transit Public Good says they drew on details of the plan from public documents and meetings to calculate their own numbers.

MBTA officials did not dispute the study’s estimates Monday, but did note that “a portion” of the estimated job losses among the agency’s bus and transit operators would be in the form of retirements or voluntary separations, as opposed to layoffs.

“While no final decisions have been made as to the extent of service changes and their related impacts on the workforce, the MBTA is fully engaged with its labor unions to keep them apprised of the evolving dialogue with the Control Board,” MBTA spokesman Joe Pesaturo said in a statement. “As it seeks to mitigate an untenable pandemic-caused financial situation, the MBTA will make every effort to minimize the level of hardship on its workforce.”

Still, according to the study, those hardships are likely to hit workers who face high COVID-19 risk levels, both at work and at home. About two-thirds of the Boston Carmen’s Union’s membership lives in communities or Boston neighborhoods that are “yellow” or “red” under the state’s color-coded coronavirus risk map. More than 60 percent of MBTA operators are non-white and 49 percent are Black, meaning the cuts would deal another blow to communities already struggling with disproportionately high COVID-19 rates due to long-standing socioeconomic inequities.

“Public sector jobs, like those at the T, have been historically a source of middle-class stability, especially for Black workers and their families, and good jobs and steady employment are critical during a time of crisis like the pandemic that’s taken a harsh toll on communities of color,” Lee Matsueda, the executive director of Community Labor United, said during a press conference Monday morning alongside Boston Mayor Marty Walsh and other local elected officials and transit advocates.

“Massive layoffs at the T are going to likely worsen the pandemic outcomes by pushing hundreds more into joblessness and instability,” Matsueda said.

The MBTA, which has run near-normal service levels since July, says the cuts are necessary to address an estimated budget deficit of nearly $600 million in the upcoming fiscal year due to a collapse in fare revenue as systemwide ridership remains a fraction of its pre-pandemic levels.

With the prospect of additional federal relief under President-elect Joe Biden and the rollout of a COVID-19 vaccine next year, transit advocates have argued that cutting service, even temporarily, is premature and necessary, especially given its potentially long-lasting impacts. While the MBTA’s current plan focuses on preserving service on subway and bus lines with the most transit-dependent riders, the cuts include eliminating all ferry service, 25 bus routes, and an hour of late-night bus and subway service, as well as sweeping commuter rail reductions and cutting the Green Line’s E Branch short by six stops.

The agency’s Fiscal Management and Control Board had been expected to vote on the cuts next week. Amid broad opposition, state officials had defended the “difficult” cuts, questioning whether it makes sense to reallocate or raise additional revenue to maintain current service levels on a transit system with roughly 25 percent of its normal ridership.

However, during a FMCB meeting Monday, MBTA General Manager Steve Poftak suggested that officials could “potentially defer some decisions on service” until the 2022 fiscal year budget process in February, while postponing the “presentation of the initial round of potential service reductions” until the board’s meeting next Monday.

Poftak didn’t specify which cuts on Monday. According to the MBTA’s plan, the changes to commuter rail and ferry service would happen as soon as January, while the cuts to bus and rapid transit wouldn’t be phased in until spring and summer, which advocates say could undermine a rebound in ridership, not to mention low-income riders and workers who have continued to rely on the MBTA through the pandemic.

“These planned cuts will hurt the communities that have been hit hardest by this deadly virus and hurt the essential workers, including the essential workers at the MBTA, who have risked everything while providing this vital service,” Mike Vartabedian, the assistant directing business representative for the local International Association of Machinists union, said during the press conference Monday.

“These people have suffered the greatest losses during this pandemic, and it is unfair to ask them to suffer even greater loss,” Vartabedian said. “They have risked getting infected by this terrible virus and have often brought it home and infected their families.”

According to the MBTA, there are 57 workers at the T currently out sick with confirmed COVID-19 cases, as well 255 employees who have tested positive and since recovered. At least one MBTA worker has died from the disease.

“They’re now facing losing their jobs and health care during a pandemic,” Vartabedian said. “With a vaccine around the corner, the MBTA officials and legislators need to find a way to avoid these cuts.”

Poftak acknowledged Monday that the implementation of some cuts “track” with the potential timing of COVID-19 vaccines becoming more widely available to the general population next spring. However, when it comes to both the vaccine rollout and additional federal stimulus, he stressed that officials are continuing to deal with an “incredibly dynamic and rapidly developing situation.”

“We’ve lived through throughout the fall — there being the potential for a stimulus and having it fall apart,” Poftak said. 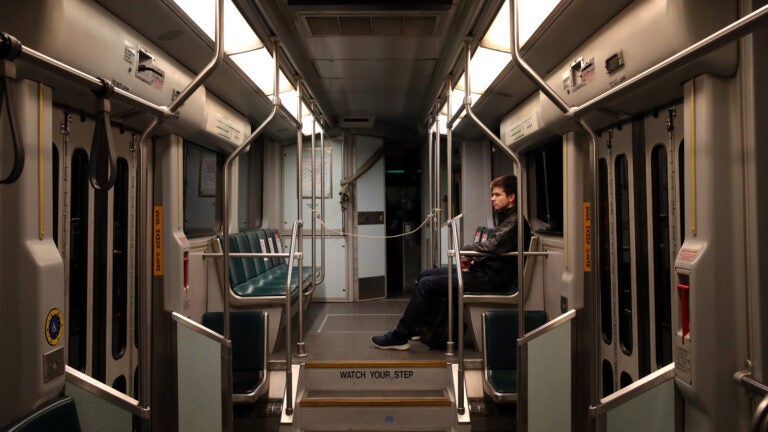