No, this isn’t in Utah or Romania — it’s right in Quincy.

A mysterious monolith popped up in the Quincy Quarries Reservation and was spotted Saturday, disappearing just a few hours later.

The 8-foot monolith was surrounded by what looked like a 100-foot crop circle made in the snow, said Patrick Geoghegan, 37, who was able to capture photos of it before it disappeared.

Geoghegan said he usually goes to the quarries to take photos, this time to grab some shots of two guys slacklining who he met in the parking lot. He went in to go set up when he saw the spectacle.

“I got in and couldn’t believe I was seeing it,” said Geoghegan, who lives in Boston’s South End neighborhood.

This monolith popped up nearly a month after one was discovered by state biologists in Utah.

The “crop circle,” he thinks, was meant to look like the COVID-19 virus.

The pictures he took were reposted on Instagram, catching the attention of many. He also posted them to Reddit, gaining over 1.7k likes in the Boston subreddit.

“Wait, to be clear, someone erected a legit 11′ tall triangular monolith in Quincy Quarries – just like the ones in Utah, California and Romania, and it was stolen in a matter of hours? This is amazing,” one Redditor wrote.

“What a bad sample Quincy residents would make for Aliens… Bork, I heard the samples all asking: ‘Where is the closest Dunkin’ in this galaxy?’” another person wrote.

Like most of the other monoliths that have appeared, its existence in the quarries ended quickly. Geoghegan said he was home for not even 20 minutes — after spending about two hours at the quarries — when he saw on Instagram that it was stolen.

“It was definitely amazing and I’m glad I just happened to go there today,” he said. 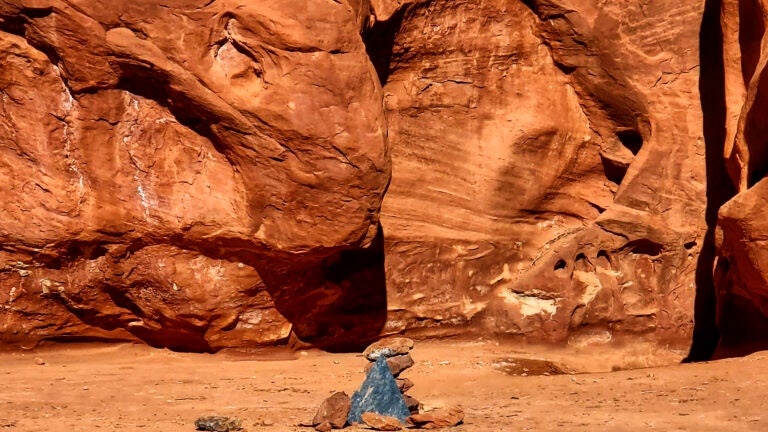 Earthlings, it seems, not aliens, removed the Utah monolith