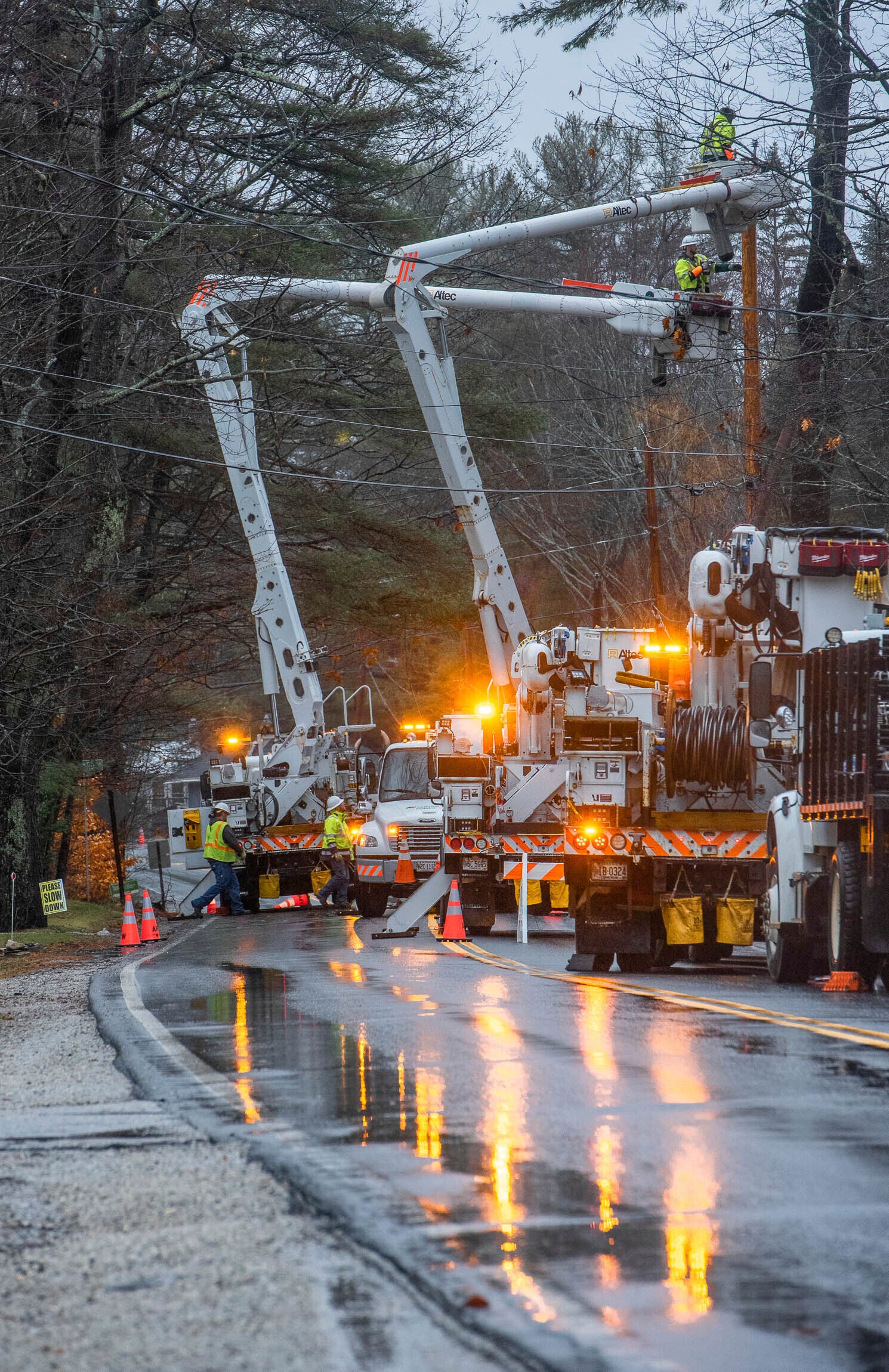 Utility crews work on the lines in Auburn on Friday, Dec. 25 2020 in Auburn, Maine. A storm packing a mix of heavy winds and rain knocked out power to thousands of homes across the Northeast region Christmas morning.

BOSTON (AP) — A storm packing a mix of heavy rains and winds knocked out power to thousands of homes across the Northeast region Christmas morning.

There were more than 7,000 customers without power early Friday in Massachusetts. State officials and utility companies had warned that the winds could knock down trees, bringing power lines down with them.

Winds gusted more than 60 miles per hour (96 kilometers per hour) in some areas during the early morning hours.

The National Weather Service reported that one to two inches (2.5-5 centimeters) of rain had fallen across much of Connecticut, Rhode Island and portions of Massachusetts by about 9 a.m. with additional rains on the way.

The combination of heavy rain and melting snow is resulting in flooding in some of areas, the service said. There was heavy flooding on portions of Route 95 in Cranston, Rhode Island.

Adding to the flooding woes were temperatures that rose into the 60s, accelerating the melting of existing snow cover.

Eversource was cancelling vacations for many employees and bringing in crews from as far away as Pennsylvania and Canada to help restore power in Massachusetts.

Unitil Corp., an electric and gas utility in New England, opened its regional emergency operations centers in response to the high winds.

Thousands of New Jersey electric customers were also without power on Christmas Day.

Mark Durbin of FirstEnergy, Jersey Central Power & Light told NJ.com that the holiday and the widespread storm damage meant “not a lot of other utilities able to provide mutual aid.” He said crews were out and would continue working. Massive tree damage across the area would likely mean some customers without power throughout Christmas Day, he said.

PSEG Long Island reported that about 10,000 of its 1.1 million customers across Long Island and parts of New York City were without service by daylight Friday. The heavy rain and strong winds brought down large trees, branches and wires overnight. The company said over 1,300 line workers, tree trimmers, surveyors and other utility personnel were working to restore outages.

The storm also left thousands without power in the Philadelphia suburbs.

PECO spokesperson Tom Brubaker told The Philadelphia Inquirer that the outages were due to wind bringing down trees and branches and with them power lines. More than 90 PECO crews were making “good progress” in restoring electricity to customers, he said.

Further west, in Ohio, the storm dumped almost 14 inches (35 centimeters) of snow in some areas — and residents in northeast Ohio and northwest Pennsylvania were warned of more to come.

Forecasters told residents to expect more snow during the day with a transition to lake effect snow and accumulations of up to 18 inches (46 centimeters) in Pennsylvania and 14 inches (35 centimeters) in Ohio. Drivers were told to expect gusts of 30 to 35 mph (48 to 56 kph) causing blowing and drifting snow that could significantly reduce visibility and make travel “very difficult to impossible.”

Meanwhile, Con Edison reported more than 22,000 of its customers lost electric service, though power had been restored to around 6,000. Mount Vernon, Yonkers, Cortlandt and Rye were among the hardest-hit communities in Westchester, it said

The temperature in Caribou, at the state’s northern tip, was 54 degrees, which breaks the previous record for warmest temperature recorded on Christmas Day of 48 degrees set in 2014. In Bangor, the temperature was 60 degrees, also a record warm temperature for the day.

Tuesday's storms left some isolated damage. Here's when to expect more on Wednesday.