Mayor Marty Walsh said Wednesday he has not spoken to anyone in President-Elect Joe Biden’s administration recently, despite a report he is Biden’s preferred choice for labor secretary.

“Last time I talked to the vice president — president-elect, I should say — I was on a Zoom call with him with the U.S. Conference of Mayors about a week after he got elected president of the United States of America — at least the time I acknowledged he got elected president,” Walsh told reporters during a press conference on the city’s COVID-19 response. “So I have not been talking to anyone in the Biden Administration.”

The Dorchester Democrat has been floated as a potential cabinet pick for some time, particularly after last month’s election when several national union leaders said they favored Walsh, who formerly led the Building and Construction Trades Council, to helm the Department of Labor.

Walsh and Biden also have a close friendship that dates back to 2013 when Walsh was elected mayor.

But Biden, who has repeatedly touted his cabinet will be the most diverse out of any presidential administration, must weigh his picks to make that a reality.

Several Asian American/Pacific Islander lawmakers and groups are pushing for California Labor Secretary Julie Su for the position, while the Congressional Black Caucus has stood behind Patrick Gaspard, the president of Open Society Foundations. U.S. Rep. Andy Levin of Michigan, with his clean energy experience, has support from environmental groups.

On Wednesday however, Bloomberg Law reported Biden’s considerations for a labor executive has narrowed down to Walsh and Su.

The transition has reportedly notified Walsh he is among the final two contenders. The team also sought to potentially have Walsh serve as labor secretary and Su as deputy labor secretary, but Su has expressed reservations over that arrangement, according to Bloomberg Law.

A source told the outlet Su was not informed who Biden prefers for secretary and was uncertain whether she would accept the deputy position.

When asked on Wednesday whether he wants the job, Walsh sidestepped the question.

“I love being the mayor of Boston,” he said with a smile before the press conference concluded. “Happy New Year.”

Should he want to keep his current job, Walsh could be facing at least a three-way race in 2021. City Councilors Michelle Wu and Andrea Campbell both launched campaigns for Walsh’s seat early in the fall, although Walsh himself has not announced whether he will definitely seek a third term.

That decision, he said last month, will be revealed “sometime in the new year.”

Still, Walsh has hinted at an intent to run for re-election, and his war chest is flush with $6 million at the ready. Last month, his campaign raised over $323,000 and spent over $103,000. Walsh recently also brought in new communications personnel for his campaign and administration.

On Wednesday, Walsh called on residents to remain vigilant in taking precautions to help prevent the spread of COVID-19 while observing the New Year’s holiday celebrations.

“If you’re thinking about having a party or attending one, I’m asking you to rethink those plans [and] stay home,” he said. “Consider making these these connections virtually and do something very different this year. There are many safe ways to enjoy and celebrate the new year coming in.”

According to Boston Police Commissioner William Gross, all of the city’s 11 police district stations will be fully staffed for New Year’s Eve and have officers on patrol. 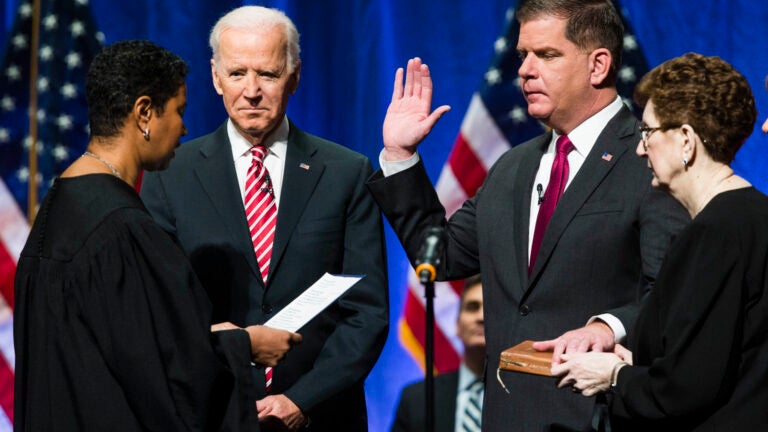