Capping off a year with widespread calls for legislative action on police accountability, Gov. Charlie Baker on Thursday signed a landmark police reform measure into law to create a statewide system to certify officers and de-certify those proven to have engaged in misconduct.

“This bill is the product of bipartisan cooperation, and thanks to the Black and Latino Caucus’ leadership on the hugely important issue of law enforcement accountability, Massachusetts will have one of the best laws in the nation,” Baker said in a statement. “Police officers have enormously difficult jobs, and we are grateful they put their lives on the line every time they go to work. Thanks to final negotiations on this bill, police officers will have a system they can trust, and our communities will be safer for it.”

The legislation, at its core, will launch the certification process — years in the making on Beacon Hill — through the new Massachusetts Peace Officer Standards and Training Commission.

The commission, a nine-member, majority civilian board, will certify officers and develop standards and processes for decertification, suspension, or reprimand when an officer is known to have committed wrongdoing. It will also investigate cases of alleged misconduct.

The law spells out the “general circumstances” police can use physical force, while barring outright the use of chokeholds and the practice of firing shots into a vehicle fleeing a scene “unless doing so is both necessary to prevent imminent harm and proportionate to that risk of harm,” according to Baker’s office.

Officers will be required to intervene in many instances where a fellow officer is using unnecessary force and to report it.

Additionally, the law limits when authorities can use “no-knock” warrants, which will now be required to be issued by a judge. The warrants can only be issued in situations where an officer’s safety would be at risk without one and when there are no children or adults over the age of 65 in the dwelling. However, exceptions are made if a child’s or older adult’s safety is at risk.

“Today begins to address decades of demands to bring reform and accountability to law enforcement institutions,” Springfield Democratic state Rep. Carlos González, chairman of the Black & Latino Caucus, said in a statement. “Today will go down in history as a necessary step to begin the healing process between the police and the Black and Latino communities. Building consensus is not always easy, but Massachusetts has always had patriots ready to take the first steps on national issues.”

Activists and advocates have said the law puts in place needed measures, but some acknowledged it fell short of adequately reforming qualified immunity, the legal doctrine that shields officers from civil lawsuits.

“This is a compromise bill,” Carol Rose, executive director of the American Civil Liberties Union of Massachusetts, said in a statement. “While it lacks many of the protections advocated by both civil rights and community leaders, it also includes key provisions that will save lives, advance civil rights, and safeguard liberties. The new law lays the groundwork for the legislature to enact additional civil rights and civil liberties protections in the upcoming legislative session, and the public pressure for change will continue.”

When lawmakers sent an initial bill to Baker earlier this month, the draft also included a moratorium on facial recognition technology. Studies have found that facial recognition programs often misidentify people of color at a disproportionately higher rate.

But Baker, who returned the bill, opposed the moratorium, pointing to how the technology assisted in the convictions of an accomplice to a double murder and a child rapist in past years.

Baker faced mounting pressure to reconsider his position, including from Celtics players, who argued the practice should not be used by police.

Ultimately, the bill signed Thursday allows police to use facial recognition searches in criminal cases and to mitigate “substantial risk of harm,” according the the State House News Service.

Police must file a request for facial recognition searches with Massachusetts State Police, the Registry of Motor Vehicles, or the Federal Bureau of Investigation, with a court order. Police do not need a court order in emergency situations.

Under the law, a commission will also study the issue and make recommendations for more regulations within the next year.

“This law represents a mile-marker, not an end,” state Sen. Sonia Chang-Díaz, a Boston Democrat, said in a statement. “Among the 50 states, it will create the first civilian-led police oversight board with subpoena power and decertification authority; it will ban chokeholds and limit no-knock warrants; it will create a duty-to-intervene for police officers and a duty to de-escalate; it will ban racial profiling and put enforcement powers behind that ban; it will end the requirement of police officers in schools. But no one bill will dismantle structural racism — in policing, or in all the other places it exists. As much as we celebrate these hard-won steps forward today, we must equally resolve to keep walking the road of racial justice in 2021.”

The Massachusetts Coalition of Police (MassCOP), which represents over 4,000 officers, criticized lawmakers earlier this month for quickly voting on the law after a months-long private process to reach a compromise bill.

By signing the bill, Baker would be “changing the police profession in Massachusetts forever,” the organization said, according to the News Service.

“A lack of proper examination and study into a number of crucial portions of this bill will result in collateral damage that will have a negative impact on many of our communities,” MassCOP said.

The law also contains elements of a bill filed by Baker in January geared at reforming the State Police, including the development of a State Police cadet program, expanding the colonel’s ability to address misconduct, and creating a new criminal charge for officers who knowingly receive pay for hours they did not work, among other provisions.

While the killings of George Floyd and Breonna Taylor by law enforcement this year bolstered nationwide calls for police transparency and accountability, some lawmakers on Beacon Hill sought to create a police certification system long before 2020.

State Rep. Russell Holmes, a Mattapan Democrat, had considered such a program since 2014 when Tamir Rice, a 12-year-old Black boy, was killed by police in Cleveland.

“This legislation is an important step toward realizing the urgent action demanded by the movement that was energized this summer by marches in the streets and speeches in front of the State House,” Holmes said regarding the new law in a statement Thursday. “For too long, Black and Latino communities have been demanding change and accountability when it comes to policing in our communities and across the Commonwealth. While we are glad this bill is now signed into law, we must now also reflect on the importance of this fight, and resolve to build on these reforms in the future.” 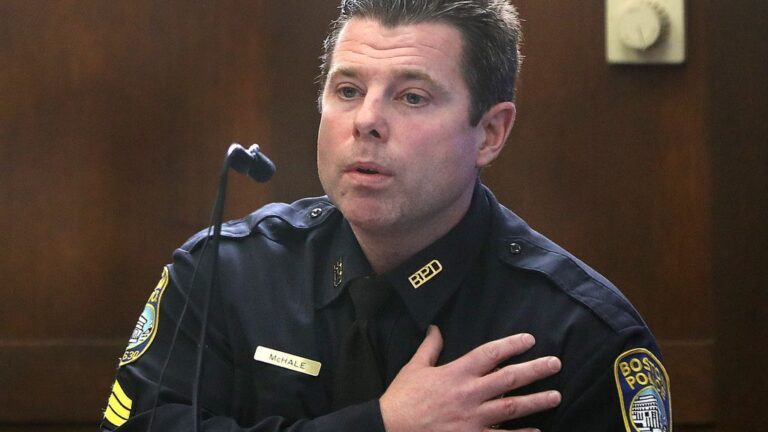 Report: Boston police sergeant who said he hit people with car during protests was accused of sexual assault in 2005