The MBTA expects to get several hundred million dollars from the federal COVID-19 relief package passed by Congress last month.

However, officials still plan to move forward with the majority — though not all — of their recently approved service cuts.

During a meeting Monday afternoon, MBTA General Manager Steve Poftak said the agency expects to get somewhere between $250 million and $300 million from the $18 billion in relief funds earmarked for transit agencies across the country, which have seen their budgets devastated by the COVID-19 pandemic.

The money comes after the MBTA got more than $800 million from the CARES Act last spring, which helped the agency cover operating costs through the pandemic as ridership — and, as a result, fare revenue — plunged. Still, with ridership less than half its usual levels due to the pandemic, officials have been staring down a projected budget deficit of up to $600 million in the coming fiscal year.

Last month, the MBTA’s Fiscal Management and Control Board approved slightly scaled back cuts to its subway, bus, commuter rail, and ferry service. Scaled back slightly from the originally proposed plan, the changes are estimated to save tens of millions of dollars, though officials haven’t said exactly how much (only that it will be less than the estimated $95 million in savings from the original plan).

The first of the cuts — which includes the suspension of weekend and post-9 p.m. service on most commuter rail lines and a significant rollback in ferry service — take effect on Jan. 23. The planned cuts to bus service and subway lines won’t take effect until March.

During the FMCB meeting Monday, Poftak said their precise allocation from last month’s relief bill is still being worked out at the federal level, but that the T is moving forward with plans to use $17 million of the funds to restore some of the service they were planning to cut.

Poftak said officials are planning “limited restorations on certain essential and nonessential bus routes” where ridership was remained relatively high. The exact lines haven’t been finalized but he said the intention is to restore service where the increase “would be serving the highest number of riders.”

Poftak said they will also use some of the money to maintain “some service in the evening on commuter rail,” adding that the agency is exploring the idea of running buses to replace the last trains of the night.

However, the vast majority of the relief funds will not go toward restoring service. According to Poftak, up to $178 million will go toward returning money to the MBTA’s long-term capital investment fund, which officials planned to cut by $460 million to fill the short-term budget holes created by the pandemic. Poftak said the new federal relief is equal to one year’s worth of the money they had to shift away from the capital plan.

The MBTA plans to hold onto the remainder of the relief funds — which is unclear, but likely between $50 and $100 million based on Poftak’s expectation — to use for operating costs in the second half of this year, when officials say they restore more service as the pandemic winds down and ridership rebounds.

While the cuts this year have proved broadly unpopular, state officials — including Gov. Charlie Baker — have consistently argued that they would prefer to reduce service early this year while ridership remains low in order to save money for service when it does come back, even if advocates fear the decision could cost hundreds of jobs and send ridership into a death spiral.

Amid calls to use relief funds to stave off cuts, Poftak noted that the commuter rail — where ridership has plunged the most — will run 50 percent of its normal levels to serve ridership that’s at 10 percent of its pre-pandemic traffic.

“So we have a significant amount of service out there for the riders who are there,” he said. 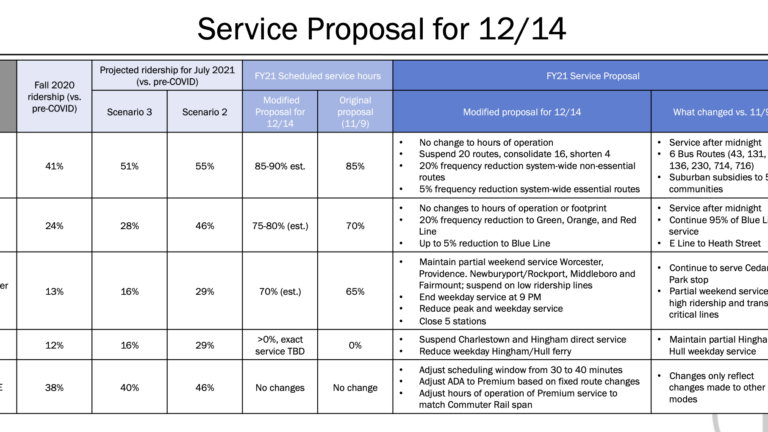 The MBTA is changing its plan to impose service cuts next year. Here’s how.