The first of the MBTA’s pandemic-induced service cuts hits this weekend.

Beginning on Saturday, the MBTA is instituting service reductions across its commuter rail and ferry lines, including the complete suspension of weekend service on seven commuter rail lines.

The network’s five other lines — Newburyport/Rockport, Framingham/Worcester, Fairmount, Providence, and Middleborough — will continue to run partial weekend service. Officials say that’s because those lines have seen relatively more ridership gains over the last several months and serve communities that depend on public transit.

Weekday commuter rail service will continue at around 50 percent of its normal frequencies.

Of all the MBTA’s services, the commuter rail has seen the most dramatic drop in ridership due to the pandemic. Overall, the MBTA says the commuter rail saw just 8 percent of its normal ridership during the morning rush hour this past fall. Current ridership levels are around 10 percent, officials said earlier this month.

The cuts taking effect this weekend also include the suspension of the MBTA’s direct ferry service from downtown Boston to Charlestown and Hingham, respectively. The agency will continue to run reduced service on its combined Boston/Hingham/Hull line. However, weekend service on that line will be suspended as well, beginning on Saturday.

It’s unclear how long the cuts will stay in place. MBTA officials have said they plan to bring back service as ridership returns.

The MBTA initially proposed suspending all ferry service and all weekend commuter rail service, but rolled back the plan amid protest from local residents and elected officials.

The agency plans to implement additional cuts — including a roughly 20 percent frequency reduction — on most of its bus and subway lines beginning in March. 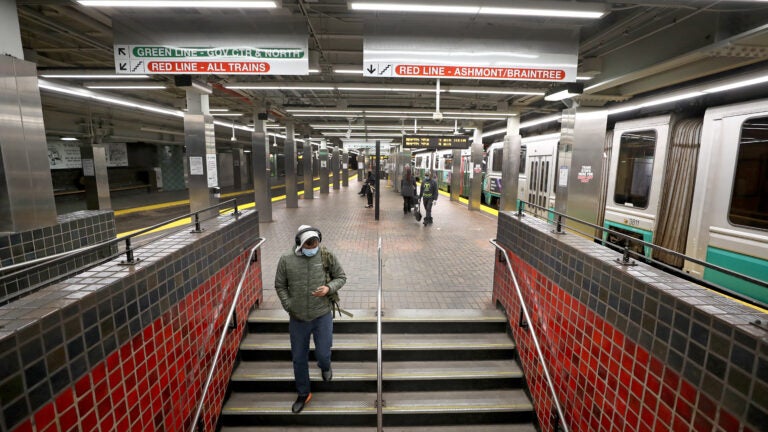