Two Black students at Keene State College said they were assaulted by six police officers, who used force to arrest them, after an argument with college staff allegedly escalated to sexual discrimination in an on-campus incident that happened nearly a year ago.

Ndeye Khady Badiane, 23, said she and her fiancé, Tyler Clavelle, were arrested last March 16 while she was self-quarantining for COVID-19 at the advice of Keene State’s wellness center.

After bringing their experiences to Keene State President Melinda Treadwell, and waiting for support that Badiane said they didn’t receive, she decided to speak out in a statement last week and posted videos of the incident at the New Hampshire campus that have since been viewed by hundreds.

“At this point we are reaching out because Keene State College does not care about its black students and has made that very clear,” she wrote.

On Feb. 1, Treadwell sent a letter to the campus community acknowledging the incident and how institutional responses can be imperfect.

“As I became aware of their experiences, I spoke with the students directly, conducted an internal review of this incident, and reached out to our City partners to discuss our working relationships, supports, and values,” Treadwell wrote in her letter. “As a result of this specific incident, we have implemented de-escalation training and we are expanding professional development programming for our employees, we will also be updating our campus safety/Keene City Police crisis management protocols and expectations.”

Badiane said Clavelle had been staying in her dorm room on March 16 to care for her after she had spent the past three hours throwing up. A resident director and a campus security officer knocked on her door after smelling marijuana, which Badiane said she had smoked to deal with her nausea and anxiety.

The incident was triggered when the residence director stopped Tyler, who is non-binary, from using the women’s bathroom to wash his hands and told him he was not allowed to, Badiane said. The director then reportedly told Clavelle that she didn’t believe he was non-binary because he used male pronouns, did not use a different name, and was not registered with the school as non-binary.

In her account, Badiane explained how a white nonbinary student in a neighboring dorm frequently uses the women’s bathroom without being challenged, but because Clavelle appears as a tall, muscular black male he was treated differently.

“Do you understand that for Tyler’s entire life he has been stereotyped or type casted because of his physical appearance?” Badiane questioned in her statement. “Do you understand how hard it is for black men in today’s society to be able to identify as something other than a male and be taken seriously?”

Badiane said she and Clavelle are filing Title IX complaints against the school and those involved.

The residence director tried to make Clavelle leave due to their argument over using the women’s bathroom, Badiane said, and eventually, the campus security officer called the police.

The situation continued escalating, and she said suddenly one of the officers began arresting Tyler.

“The two cops just move towards him, put both of their body weight on him which was unnecessary force so I got up grabbed my phone and yelled to them that I was recording,” Badiane wrote. “One of the police officers was trying to put the handcuffs on him and the other started choking Tyler on the left side of his neck and proceeded to dig his finger into the back of Tyler’s ear to which he screamed out in pain. I could barely move a second before but the second I saw Tyler’s life in danger my adrenaline went up and I knew I had to do something or he would be another black victim to police brutality by excessive force.”

videos of some of the events. If you think Black Lives Matter, please share,call and email. Thank you for taking the time. You can reach Keene state College’s president at 603-358-2000 or email at [email protected] @KeeneStatePrez @KeeneState_ https://t.co/rwD8nQxX28 pic.twitter.com/Ak5UgpZGDM

She said she jumped in between Clavelle and the officers in hopes they would stop, but the campus safety officer allegedly grabbed the soles of Badiane’s feet and dragged her away.

“I told him he had no right to drag me and to let go of my legs which he did not do so I had to kick my legs free,” she said. “He was not holding the fabric of my pants at all and the only reason I kicked was to get free of his hold on the arches of my feet.”

When she got up and turned around, she said she saw “a number of police officers running up the stairs as if this was a raid. One of the officers ripped my recording phone out of my hand and then 6 cops proceeded to immediately tackle me to the ground.”

Badiane said the residence director and police wrote in their reports that she had been gently laid down and “escorted to the ground.”

“I was slammed on the ground and my right shoulder was dislocated and I screamed in pain and was completely ignored as they continued to put handcuffs on me,” she said. “Then Tyler was slammed down by multiple police officers and his face was next to mine asking if I was okay while he was bleeding from his mouth.”

After being arrested and taken to the police station, which Badiane said was “heavily adorned with Trump 2020 paraphernalia,” officers arranged court dates for the couple.

As they were escorted back to Keene State’s campus, the officer driving allegedly pulled over behind a building and took their phones, saying he would return them once they arrived at the college.

The next day, Badiane said she and Clavelle went to see a doctor for their injuries, who told them they looked like they had been “beat up.”

“This situation did not need to escalate to this point at all and it was their responsibility to make sure it didn’t,” Badiane said. “I’m constantly hit with flashbacks of being tackled by 6 police officers and don’t know if they will ever stop.”

Keene police told The Sentinel Source that officers used minimal force, and that it was necessary.

“I will say the KPD maintains, and there are outside witnesses, that there was absolutely no use of excessive force, and that the minimal force used was reasonable and necessary due to the active resistance of the suspects,” Police Chief Steven Russo wrote in a recent email to The Sentinel. “As you know, people are free to write any version of events they wish on social media. Those involved and who wrote these posts did not file a complaint with our department, nor any other agency that I know of.”

President Treadwell added in her statement that over the summer, she requested a broader assessment of the college’s Title IX and discriminatory harassment policies, protocols, and structures of support.

“I have recently received a set of recommended improvements. I will be sharing information and progress as we implement continuous improvement actions,” she detailed in her letter. “I spoke with both students who were involved in the March 2020 incident to support their academic progress and to hear their concerns. Additional staff members also reached out to support the two students. We will continue to do our best for them.”

Treadwell also explained that because she receives “hundreds of messages” and can’t always respond to all of them, she missed an email from Badiane in October, contributing to the student’s sense that the school didn’t care about the incident.

“Had I seen this message, I am confident our students would have felt a stronger sense of support from me and the College,” she said. “As a result, I am implementing a communications protocol in the President’s office to ensure that important outreach from our students, faculty, staff, or partners does not go unanswered.”

Since speaking with the students, Treadwell said the college has launched multiple policy changes, like expanding its first-year experience programming, conducting increased training and education programming, refining performance expectations for senior leadership, frontline staff, and faculty, and developing new policies for students to address any form of bias, harassment, or discrimination.

“We are updating our policies, practices, and performance expectations and accountabilities as we move forward,” Treadwell wrote. “We remain a community committed to our students and we will not shrink from obligations to address needs or to make changes as we learn of areas of improvement or where we have failed to hold our values. When a member of our community raises concerns about their experience, our supports and actions—particularly if our values are potentially compromised—we will listen, review, and make changes to improve, grow, and deliver on our commitments.”

In late January, Badiane posted to a GoFundMe page she created to help raise money for legal fees and grief counseling as she and Clavelle plan to challenge the police department and Keene State.

Badiane said her lawyer informed her that pursuing the case could now affect her immigration status, even though she has a green card and has been in the U.S. since she was a child.

“This is how thoroughly the system protects these people and bullies minorities. The people who instigated and escalated this situation have no repercussions while we are put through hell,” she wrote. “Honestly I feel tired, powerless, and angry but we won’t give up. Please keep sharing and donating so we can fight for justice.” 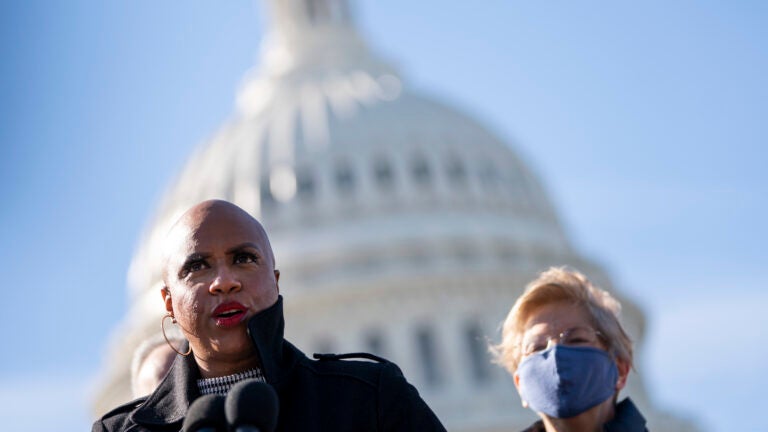 ‘This is the time to reconstruct’: Here are 4 ways Ayanna Pressley says the country can recover from the pandemic, and work toward equality