One worker was killed and another was critically injured Wednesday morning when a stairwell collapsed at a parking garage in Cambridge, according to authorities.

One of the workers, a 56-year-old man, was pronounced dead at the scene, while the other, a 41-year-old man, was transported to a local hospital in critical condition with “significant” chest and arm injuries. The two men were working in the second-floor stairwell as part of a restoration project tasked with disassembling the stairway in order for it to be replaced.

The Cambridge Fire Department responded to the report of the collapse at the city-owned garage at 55 Spring St. just before 8:30 a.m.

Fire Chief Gerry Mahoney told reporters the garage was open to the public but the stairwell had been closed for the restoration work at the time of the collapse. The fire chief estimated that “at least a ton, if not more,” of steel risers with poured concrete gave way in the incident.

“It’s part of the job, but it’s something, deep down, you really don’t get used to,” he said of responding to the fatal collapse. “But that’s the business we’re in.”

The two workers involved were employed by a subcontractor working on the project, which had been underway for about a month, he said.

Authorities have not released the names of the two men, and the cause of the collapse is under investigation.

The incident comes a week after two workers were killed at a construction site in Boston.

Units have responded to a parking garage at Second Street and Spring Street after one of the stairwells collapsed, resulting in significant injuries to two on-site workers conducting restoration work. #CambMA pic.twitter.com/d436WFykTS 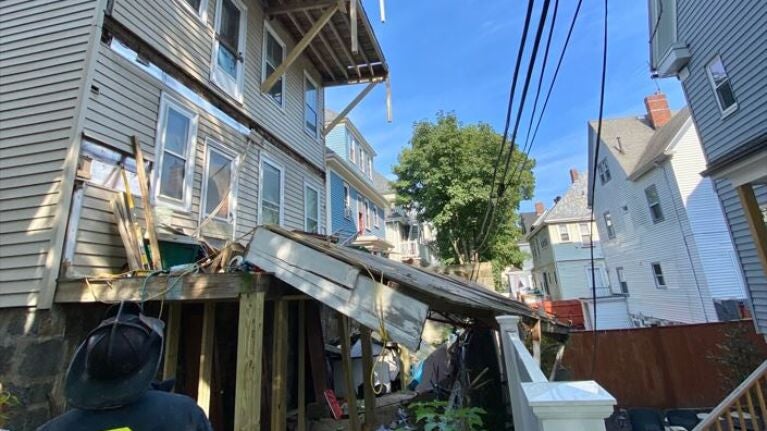 Worker trapped in rubble after 2nd-floor porch collapses in Dorchester