Congressman Stephen Lynch, speaking on behalf of the state’s congressional delegation Monday morning, slammed the MBTA for rolling out a wave of service cuts to its core system as Massachusetts receives $1 billion for its transportation agencies under the latest federal COVID-19 relief plan.

“It is incongruous with with our intent … that an agency would take federal support from the taxpayer and then cut services to those same taxpayers,” Lynch said during a press conference highlighting the $1.9 trillion American Rescue Plan passed by lawmakers last week. “That doesn’t work for us.”

On Sunday, the MBTA began controversial service cuts to subway and bus service in an attempt to save money lost by the significant drop in ridership during the pandemic. The move follows cuts to commuter rail and ferry service put in place earlier this year. Officials say they intend to restore service as ridership rebounds.

The loss in revenue also prompted Keolis Commuter Services, the company that operates the commuter rail, to indefinitely furlough 40 conductors and assistant conductors — approximately 9 percent of the system’s conductor workforce.

“They’re going to take the billion dollars and lay people off? I don’t think so,” Lynch said.

The MBTA received over $1 billion in federal relief funding over the past year — cash that helped cover losses in fare revenue. In the 2019 fiscal year, the agency brought in almost $700 million. By the time the current 2021 fiscal year ends in late June, the MBTA expects it will have collected less than $200 million.

Agency officials have said they are saving some of the previously allotted relief funds to put toward the 2022 fiscal year, as well as budget reallocations and other cost-saving efforts. (This year’s service cuts are expected to save about $21 million.)

They expect a gradual return to pre-2020 ridership to take several years, with the most optimistic scenario seeing a return of 89 percent of 2019 levels by 2026. Even so, a four-year budget deficit would total almost $1.8 billion by that point.

The projections notably do not account for the latest relief cash from federal lawmakers. MBTA officials said earlier this month they did not expect to receive specific numbers until several weeks after the massive relief package passed.

“With ridership remaining at less than a third of pre-pandemic levels, the MBTA continues to monitor work and travel patterns and match service to ridership, while increasing service for the most transit-critical communities,” MBTA spokesman Joe Pesaturo told Boston.com in a statement Monday in response to Lynch’s remarks. “As it plans ahead for the long-term budget impacts of the pandemic, the T will responsibly spend federal stimulus dollars and monitor ridership and make adjustments as necessary.”

Lynch, while detailing parts of the latest relief plan, said the state’s entire congressional delegation is opposed to the service cuts and furloughs. He told reporters his fellow lawmakers are “furious about this.”

“The whole idea here is to move the country and the state and cities and towns back to a more normal pattern of life,” Lynch said.

The South Boston Democrat called on Gov. Charlie Baker and MBTA leaders to “come back to the table” with legislators.

According to Lynch, Massachusetts is slated to receive about $8 billion in federal aid under the American Rescue Plan, with an additional, approximately $435 million allotment for Boston alone.

In total, the legislation provides $50 billion in aid to small businesses, $130 billion to help K-12 schools reopen, $27.5 billion in rental assistance, $10 billion for homeowner assistance, and $20 billion to expand COVID-19 vaccine distribution, among other allocations.

“We want to get America back to work and that will require all aspects of our society to re-emerge,” Lynch said. 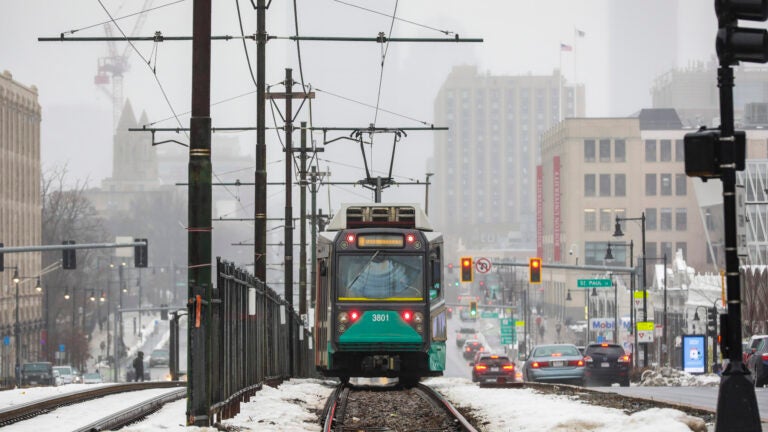 Federal funds are helping the MBTA cover losses due to the pandemic in the short term. After that is the problem.