Marty Walsh was at Logan Airport Tuesday morning, ready to head to Washington D.C. for his next job serving as the nation’s secretary of labor.

But even as the Boston native prepared to leave his hometown, he still clung to a go-to local staple: a cup of coffee from South Boston’s Doughboy Donuts, according to reporters at the airport.

Former #Boston Mayor Marty Walsh at Logan Airport this morning heading to Washington to be sworn in as Labor Secretary.

And… he’s taking some #Dorchester with him in the form of a coffee from Doughboy Donuts. pic.twitter.com/ze69QjjNEV

A longtime regular, Walsh often swings by the drive-thru for his daily medium, hot coffee, owner Phyllis Fandel explained last month when Walsh name dropped the shop in a Senate committee hearing on his nomination.

The quick callout in front of a national audience brought an onslaught of calls and excitement from customers, Fandel said at the time.

Walsh was confirmed by the Senate Monday evening, and resigned as mayor later that night, thereby ushering Kim Janey, the city council president, into her new role as acting mayor.

“It’s bittersweet,” Walsh told reporters at Logan on Tuesday morning, WBZ reports. “Being mayor was an incredible job. Loved it. A little emotional this morning, but I’m looking forward to my new challenge.”

Former #Boston Mayor Marty Walsh just arrived at Logan Airport carrying a coffee from Doughboy Donuts in South Boston. He’s leaving for Washington where he will be sworn in as U.S. Labor Secretary today. @wbz pic.twitter.com/SaGbWLFZ3n 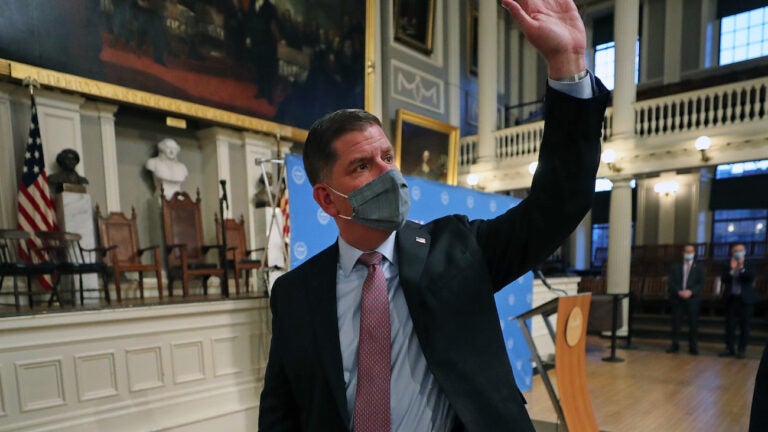