LAWRENCE — Firefighters from multiple departments across the region battled a six-alarm blaze on Bennington and Saratoga streets Sunday evening that involved several buildings in a densely populated neighborhood, officials said.

Some people could be trapped inside the buildings, according to Jennifer Mieth, a spokesperson for the state fire marshal’s office.

At the scene Sunday evening, flames billowed from the roof of a home at 19 Bennington St., where a pair of fire trucks were parked out front.

James Norris lives next door at 21 Bennington. He stood at the corner of Bennington and Bromfield streets watching and hoping the flames wouldn’t reach his house.

“Come on boys, I know you can do it,” he said as he watched firefighters douse the flames with water from a truck ladder reaching high above the power lines.

Norris said he was sitting on his back deck watching his granddaughters roast marshmallows in the backyard when he noticed smoke wafting over from the house next door.

He called the fire department but was told they were already on the way.

“What a [expletive] candle that is,” he said watching as flames leapt violently from the roof, and both black and white smoke poured out.

Nearby, fire hoses ran down Saratoga Street, which was closed south of Lawrence Street except for emergency vehicles. Six ambulance sat idling in a nearby parking lot.

Onlookers crowded the sidewalk near a home at 14 Saratoga St. watching as firefighters walked into and out of the two-story house. Fire trucks filled the street, their red and white lights flickering through a thick screen of smoke.

Stoneham Fire Department’s Engine 2 was deployed to assist Lawrence firefighters at the scene, the Stoneham department said on Twitter.

The blaze had grown a five-alarm fire by about 8 p.m., the Woburn Fire Department, which also sent its Engine 2 to Lawrence, said in a tweet.

Officials at the Lawrence Fire Department were unavailable for comment as they battled the flames Sunday evening.

Daniel Hilton, a 30-year-old Salem, N.H., resident, was visiting his mother in the city when he noticed smoke. He started driving along Bennington Street, which runs parallel to Saratoga Street, and then saw two homes engulfed in smoke. One of the house’s yards, too, was aflame, he said.

Hilton rolled down his windows to capture a short video of the scene, and was shocked by the heat.

“It was just hot air,” he said. “I had to leave because breaking it was an issue for me.”

Hilton, who lived in Lawrence in 2018 when gas explosions tore through the Merrimack Valley and killed a Lawrence teenager, said he was reminded of the incident.

“It kind of brings that memory back,” he said.

Some of the city’s technical services remained out of service Sunday after “malicious activity” caused disruptions, which Lawrence Mayor Kendrys Vasquez announced in a tweet on Saturday afternoon.

The tweet said residents should call 911 in the case of an emergency.

It was not immediately clear which services were down, but attempts to load the city’s website were unsuccessful and calls made to city officials’ office phones did not connect.

This is a breaking news story and will be updated as more information becomes available. 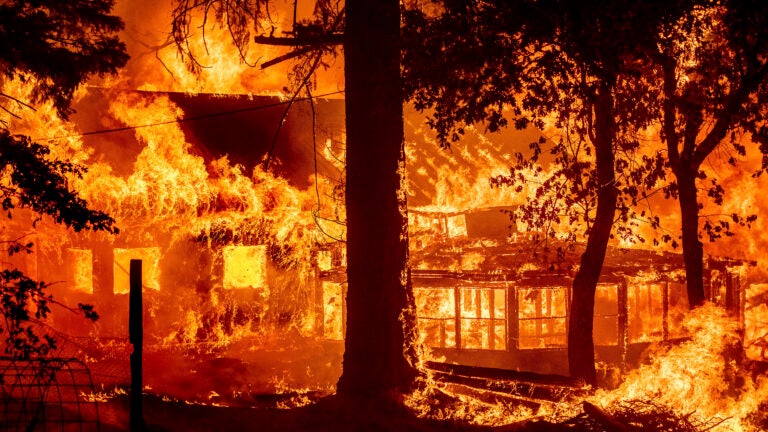